Lt. Col. Mark Weber, a former aide to Gen. David Petraeus in Iraq, has become known in Minnesota as a celebrated war veteran who’s dying of cancer and wants to pass along his life story and his life’s vision to his young sons and others.

There was much publicity last summer when the Minnesota National Guard lieutenant colonel and his son, Matt, a Rosemount High School junior, sang the emotional “Tell My Father,” a song from the Broadway musical “The Civil War” that recounts the message that a Union soldier dying on the field of battle wanted carried to his father.

Weber was honored by many of the Army’s top generals who came to Rosemount in August to present him with the military’s Outstanding Volunteer Service and Legion of Merit awards. Weber’s wife, Kristin, was given the Minnesota Superior Civilian Service Award. (Petraeus was not at the August ceremony.)

Now Weber has written a book, “Tell My Sons,” that is now available as an ebook and will be published in print Dec. 3.

Descriptions of the book say it started as a letter to Weber’s three sons, so they’ll know, while growing up without him, what he’s learned about courage and fear, challenge and comfort, words and actions, pride and humility, seriousness and humor, and a never-ending search for new ideas and inspiration. It evolved into a book of advice for everyone, from a dying hero.

I’d met Weber last summer and saw him again the other night, soon after the Petraeus/Broadwell scandal had revved into high gear.

Because his work with Petraeus is covered at length in the new book, I asked how his perception of the general — who had to resign as head of the CIA after the affair became public — has changed. 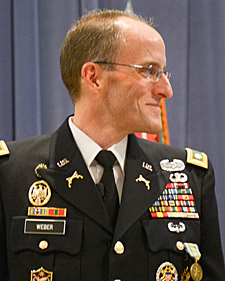 Weber said he worked with the general long before biographer Paula Broadwell began working on a biography that apparently led to the affair.

But he said he wanted to get his thoughts together before giving a thorough answer, and last night he emailed me this response:

I should state up front that despite an exceptional rapport and frequent exchanges between us over the past six years, I do not claim an “insider” view of the man. I can only say what I saw and what I experienced with him, which has all been exceptional. He is easygoing and one of the smartest and most energetic men I’ve ever met in my life, which creates a self-imposed demanding nature to the man – I just always wanted to be a better person when I was around him.

It’s difficult to discuss Petraeus’ actions without sounding like I am defending his behavior. What he did is indefensible, but that’s clearly something he doesn’t disagree with or shirk from. He cannot right the past. Like any hardship, he can only deal with what is in front of him today – whether by his own hand or others. Honor, then, is about taking responsibility in the face of shame, and he did that. To those who say that there must be more to all of this than honor, I say with great confidence: then you simply don’t know General David Petraeus. He’s a virtual prude on the subject.

I do understand the questions and the curiosity, because what he did is incredible, and it is unreasonable to expect that all of his good behavior should erase this singularly blinding bad act. Big dog; big poop. But that curiosity should lead to a hunt for facts, not salacious gossip and baseless speculation. Some people seem disappointed that his fall from grace isn’t more dramatic, or that it hasn’t yet been painful enough for him, or that he seems to have fallen with such dignity, grace, and control. He dived on his own grenade, for crying out loud.

Perhaps we’re bothered that he should do something that might make us feel admiration while at the same time experiencing displeasure at something so universally objectionable. Perhaps our expectation is that he deny it, ignore it, fight it, or otherwise make a spectacle of himself, as we’ve seen from past leaders dating all the way back to Eisenhower. As leaders and journalists line up with their long knives to take a slice out of him, I do wonder. Are they disappointed that he fell by his own hand instead of theirs?

I’m angry with General Petraeus. There’s no “but” here. Like it or not, he has been a standard bearer for leadership and calm under pressure. So his behavior tarnishes all men and women who seem too good to be true, and it feeds those among us whose sole stock in trade is to tear others down rather than to work harder to build themselves up. Why bother?

The issue of how Petraeus should ultimately be judged can be illustrated in a joke I like to tell regarding scope and scale of human failings. What’s the difference between kinky and perverted?  Kinky is when you use a feather; perverted is when you use the whole chicken. Petraeus used a feather. Those who suggest that there must be more are holding chickens in their hands.