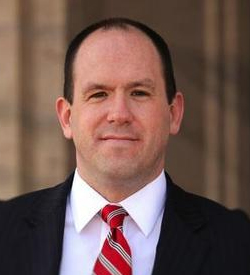 Michael Brodkorb, the former Minnesota state Senate staffer who is embroiled in a lawsuit over his firing, was reported in critical condition after a car crash on I-35E in Mendota Heights Wednesday night.

His was driving northbound about 9:15 p.m. on the freeway when his car hit a wall and then swerved across three lanes, a State Patrol report says. The report also says that Brodkorb, 39, was not wearing a seat belt and that alcohol use was detected at the scene, the Star Tribune reports. He was alone in the car.

Brodkorb had been a hard-charging Republican activist before being hired as communications head for the state Senate GOP. But his involvement in an affair with then Senate Majority Leader Amy Koch led to her downfall and, later, his firing.

He’s contesting the firing, claiming  discrimination because female legislative aides who had affairs with legislators were not fired.