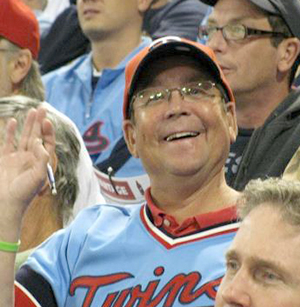 The St. Paul resident, 57, was known as a fixture at Twins baseball games, at the Met, the Dome and Target Field. He also loved Gopher basketball.

Friends said he also wanted to be remembered for his community work, fighting for the poor, the  disenfranchised, and people with disabilities.

His medical problems started in childhood: he had his first kidney transplant at age 11, and needed two more transplants later in life. He also survived aggressive squamous cell skin cancer and had his arm and shoulder amputated. Last year he was diagnosed with a blood cancer.

He is survived by his wife, Kiki Sonnen, a former St. Paul City Council member.