When Keith Downey takes over today as the chair of the Republican Party of Minnesota, he will be several steps ahead of where his predecessor, Pat Shortridge, started when he volunteered for the job in 2011.

Based on the convention of the party’s state central committee over the weekend in Bloomington, it appears that the party has made a few strides in regaining its self-esteem. Downey, in optics and verbiage, tried to convey the message that this is not your father’s GOP.

Before the delegates took the vote, Downey referred to the perception that Republicans care little for the needy. “We will link arms with them and we will walk out of [poverty] with them,” he said in a speech to delegates.

His team of nominators included a student, a stay-at-home mom who said she was “sitting in the middle,” an African-American delegate from 6th congressional district and the chair of the Hispanic GOP assembly.

Delegates were in no mood to be reflective about stunning election losses or the party’s precarious financial position. They picked only a few nits about party rules. Ron Paul’s name was not uttered publicly. With Downey, they chose the shortest path to party unity.

State Rep. Kurt Zellers, the former speaker of the House who lost the majority in 2012, suggested that DFL dominance sparked pragmatism among party activists.

“One of the best things that has united us as a group, whether it’s first-time delegates or long-time delegates, is total DFL control,” he said at the GOP’s state central committee meeting, where he was an observer, not a delegate.

Downey agreed. “There’s nothing like losing an election and seeing the results of that to steel your resolve and get you excited.”

Still, there remain divisions that may become more pronounced as the Republican Party moves to endorse candidates for four statewide offices and the U.S. Senate. Downey said he expects those races to draw primary challengers. And although he supports moving the primary to June, as do many DFLers, he said the party would fully support candidates who receive the party endorsement at local and state conventions. 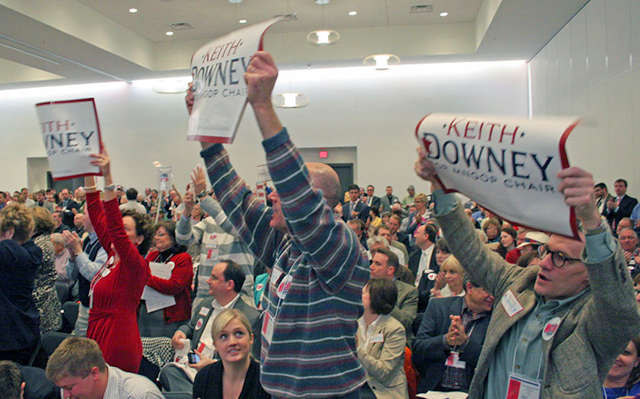 There is also that pesky seven-figure debt. Shortridge pared the debt from $1.9 million accrued under the chairmanship of Tony Sutton to $1.6 million. Downey won’t predict he will eradicate the rest of the debt, but said he has a plan of attack. He said he would start by “partnering” with political action committees and independent-expenditure groups in terms of funding candidates and races. As for the party itself, he said, “there are a lot of people, major donors and minor donors, who’ve been sitting on the sidelines and I hope that with the positive momentum that we got, we can go out and execute a plan across all levels and restore giving to the party.”

Downey gave Shortridge an appreciative parting shot for putting the party on surer footing.  “We’re no longer in the ICU; we’re ready for the rehab,” he said.

Shortridge gave Downey a veiled prediction of what he’s about to face: “The two happiest words in the English language are ‘former chairman.’”