Traffic-calming devices designed to slow down motorists will be incorporated into two new Minneapolis bicycle boulevards scheduled for completion by late fall.

The Presidents and Stone Arch Bridge Bicycle Boulevards in northeast Minneapolis will have two miniature traffic circles, one concrete median and curb extensions that will narrow the road. The Southern Bike Connection in south Minneapolis will have four miniature traffic circles, one concrete median, curb extensions and speed bumps.

“Bicycling is prioritized on these streets,” said Shaun Murphy, bicycle and pedestrian coordinator for Minneapolis. “Motorists are still welcome, but the traffic calming is in place to keep motorists going slow.”

The traffic circles will be about 20 feet in diameter; most of the residential streets in Minneapolis are 32 feet wide, and will accommodate fire trucks and school buses.

“These are sized to fit a small intersection.” said Murphy.  “They will have landscaping in them maintained by local residents.  They should be a neighborhood amenity.”

There will be signage at each traffic circle to show motorists and bicycle riders how the navigate the intersection. Bicycle boulevards will also have large bicycle logos painted on the street surface.

The medians will be concrete and will run down the middle of the road.  They will be smaller than the center islands installed along Lyndale Avenue, for example, that have been planted with trees and grass.

“The medians are handy for people on bikes or on foot because they give them a spot to stop and wait for traffic to clear,” said Murphy who added that the “tricky part” of crossing a busy street comes when you get to the middle and have to wait for an opening in traffic.

Curb extensions and speed bumps have been used previously in Minneapolis to slow traffic. A system to choke off traffic is also being tested on 6th Avenue SE. This device narrows the street from 32 feet to about 12 feet, leaving room for only one car to pass at a time. 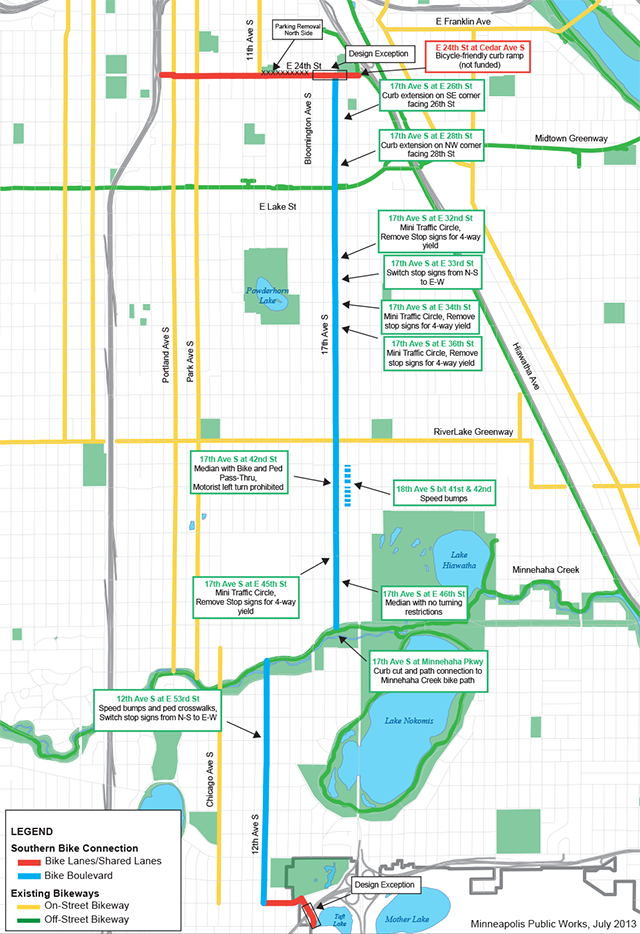 The new bicycle boulevards will be paid for with federal funds from the Non-Motorized Transportation Pilot Program awarded to Minneapolis in 2008 and 2009.  The Presidents and Stone Arch Bridge Boulevards were awarded $455,000 with funds for the Southern Connection adding $400,000 for a total of $985,000.

“These fill pretty large gaps in the system,” said Murphy. Construction is expected to begin in September with both boulevards scheduled for completion in October depending on the weather. Together the two boulevards will total about seven miles. Minneapolis currently has 190 miles of bikeways.

The Presidents Bicycle Boulevard in northeast parallels Central Avenue and takes its name from the three streets named after presidents that will carry the bike traffic: Tyler, Polk and Fillmore Streets NE. At East Hennepin the boulevard changes names and becomes the Stone Arch Bridge Bicycle Boulevard, which merges with the bridge at the river.

The Southern Bike Connection follows 17th Ave. South between Cedar and Bloomington Avenues before jogging to the west at Lake Nokomis and traveling along 12th Avenue South. 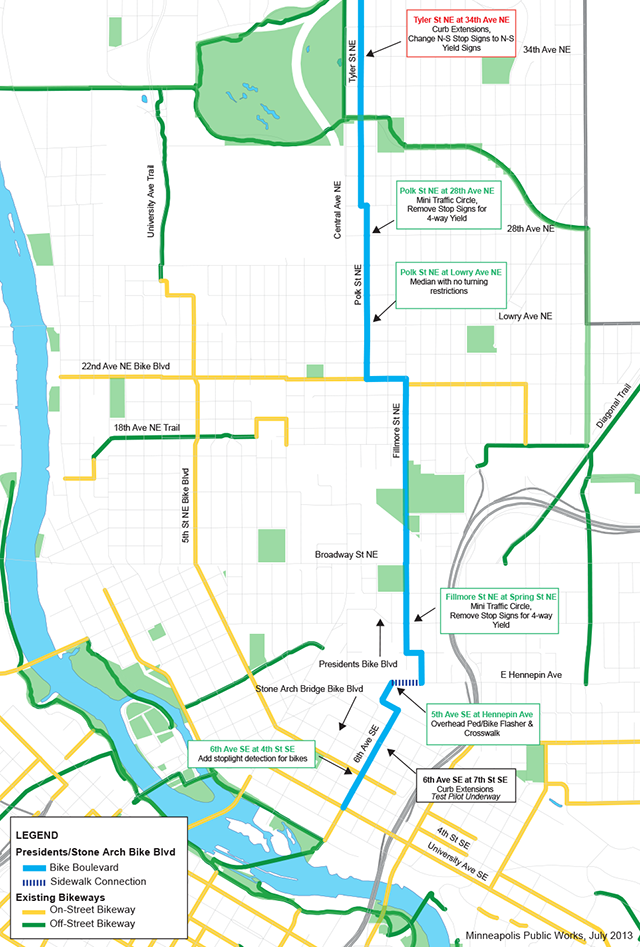