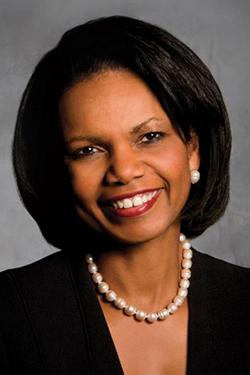 Nearly 200 University of Minnesota professors have joined the controversy over a scheduled speech on Thursday by former Secretary of State Condoleezza Rice, saying in a public letter that they don’t think the Humphrey School lecture series is an appropriate forum for her talk.

The speech at the university’s Humphrey School of Public Affairs is part of the Distinguished Carlson Lecture Series, which, this year, focuses on civil rights.

Students and others have been protesting the appearance of Rice, who was involved in many of the Bush administration’s controversial human-rights decisions before and during the Iraq War, on such issues as prisoner renditions, torture, the detention of militants at Guantanamo Bay, and others.

The professors signing the letter say they support Rice’s right to free speech, and would like to hear her talk about her foreign-policy decisions and experiences, but they don’t feel the civil-rights lecture series is the right time or place.

“We aren’t requesting that they rescind the invitation, but we’re suggesting that the parameters of the invitation were not well thought through,” said Barbara Frey, director of the Human Rights Program at the University’s Institute for Global Studies.

“We want to be on the record, in opposition not to her speaking, but of the framework of her presentation. And we hope [Humprey School] Dean [Eric] Schwartz, when he’s introducing her, might take cues from the letter of the kinds of questions that he might ask.”

Schwartz said Tuesday in a statement:

The Humphrey School welcomes the conversations this invitation has generated; we value public discussion and dialogue. We strongly believe that our School’s namesake, Hubert Humphrey, would feel the same way.

Dr. Rice is one of about 20 speakers of differing perspectives that the Humphrey School will have hosted over the course of the year to reflect on progress achieved and challenges ahead in this 50th anniversary year of the Civil Rights Act.

Another professor, who helped organize the letter but asked not to be named, said two issues prompted the protest letter:

While Dr. Rice is an accomplished African-American woman, the advancement of civil rights — the theme of this year’s lecture series — is not central to her legacy. Indeed, as a leading national security official during the entirety of the Bush administration, she bears responsibility for substantial violations of civil liberties and civil rights that were carried out in the name of prosecuting the War on Terror.

Some organizers also said there was concern about her $150,000 speaking fee, which is being paid by private sources, not from university funds.

“That seems wildly inappropriate for any speaker, especially in a civil-rights/economic-justice situation,” said the professor.

The letter includes specifics about Rice’s record in the Bush administration:

Dr. Rice is welcome to speak on the University of Minnesota campus, but let’s not ignore her record. As National Security Adviser in the critical period of 2001-05, Dr. Rice played a central role in the design and implementation of the Administration’s policies, which legitimized the use of torture by redefining it to include only practices so severe as to induce organ failure. By this logic, “enhanced interrogation techniques” that had previously been defined as torture, such as waterboarding, were no longer defined as such and became standard practice in the War on Terror. Since the end of her tenure, Dr. Rice has defended the use of torture and has not publicly distanced herself from these decisions that violated both US and international law and resulted in severe violations of human rights.

Dr. Rice also supported the Administration’s policy of rendition, whereby individuals were abducted and delivered by US authorities to “black sites” in third countries such as Egypt and Syria, countries that were known to subject prisoners to torture. This practice violated due process, since these individuals were detained without being given the opportunity to defend themselves. They were effectively found guilty without trial. And they were tortured. Since some detainees died while in custody, this practice was, in many circumstances, tantamount to authorizing extrajudicial execution.

University President Eric Kaler has said said that free-speech issues dictate that the speech must go on.

The letter and faculty members’ signatures can be seen here.