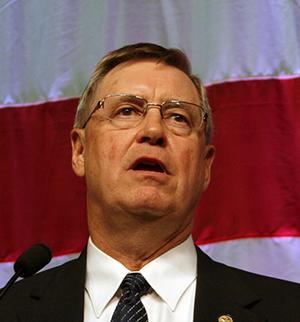 Newman, a two-term senator and attorney from Hutchinson, ran unopposed for the Republican endorsement at the Republican Party of Minnesota’s convention in Rochester Friday.

Newman touted his authorship of the photo identification constitutional amendment, which failed on the ballot in 2012. He criticized Swanson for not taking action as the photo ID legislation faced a legal challenge.

“There is no place for politics in that constitutional office,” Newman told the crowd. “It is the highest legal office in the state of Minnesota and carries with it grave responsibilities, and those responsibilities have not been meet for almost a half a century.”

There hasn’t been a Republican elected to the attorney general’s office in Minnesota since 1966. Swanson, running for her third term as attorney general, won her last two races with more than 10 point margins.

Newman graduated from the William Mitchell College of Law. He’s a former Hennepin County deputy sheriff, public defender and administrative law judge and served one term in the state House.