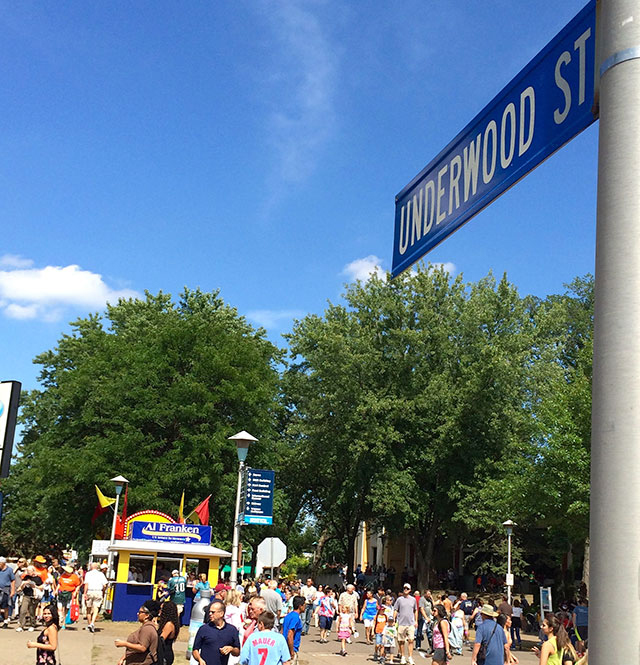 MinnPost photo by Joe Kimball
Many of the political booths at the Minnesota State Fair are on or near busy Underwood St.

My favorite impression of the Minnesota State Fair political scene is that many of the party and candidate booths are clustered around Underwood Street, recalling Frank Underwood, Kevin Spacey’s character in the gritty Netflix political drama “House of Cards.”

Obviously, and fair officials confirm it, the street was not named for the fictional politician, but I would like to see a new fair attraction: “House of Curds.”

The fair’s political booths were in full swing Wednesday, with the November election just over two months away and the governor’s race, a U.S. Senate seat, all eight congressional seats and the entire state House all up for grabs.

Even when voters do stop by a party booth it’s usually not to be converted, but to validate their choices. The politicos are preaching to the choir.

I stopped by many of the booths, took a picture and asked a quick, non-controversial question of the campaign workers.

Here’s a look at many of the booths and what campaign workers had to say: 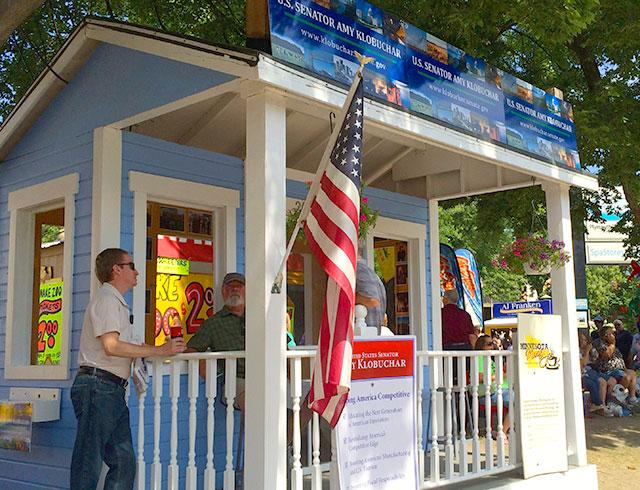 Q. Is Sen. Klobuchar the funniest senator? Funnier than Franken?

A: They had a contest for funniest senator and someone wrote something for her — I probably shouldn’t say that, but I think that’s the way I believed it worked — and hers was way funnier than Franken’s. 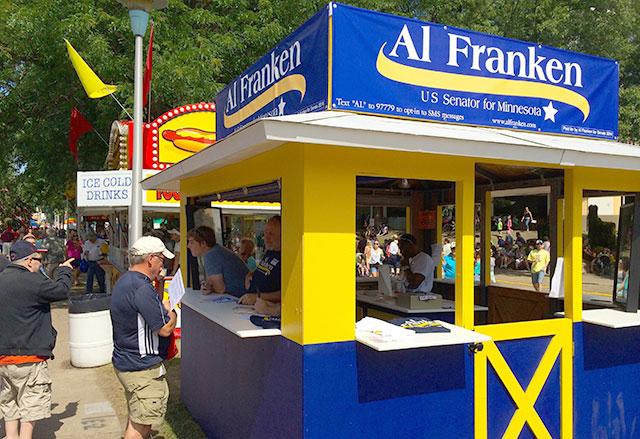 A. That’s up to you to decide.

A. Sen. Franken says she is. 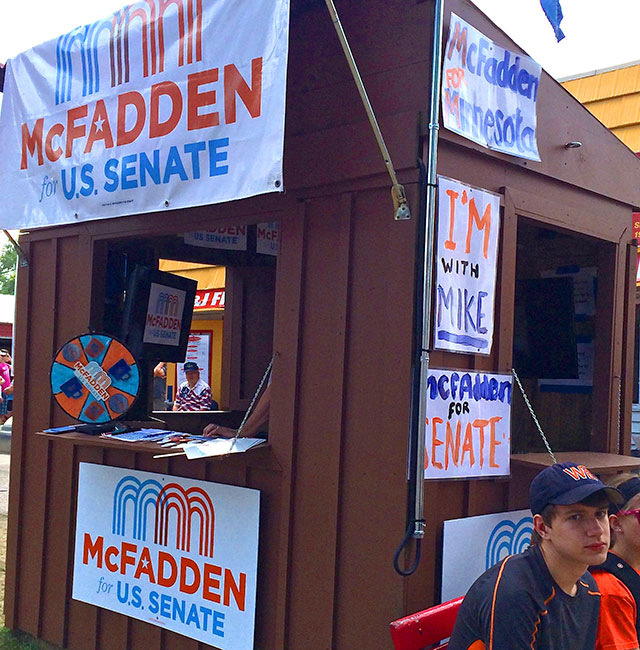 Q. What do most people ask you about?

A. Most comments are about the commercials. It’s about half-and-half on whether they like them, and it’s very visceral. They love them or they hate them. One woman was very angry about the stitches commercial [where McFadden’s son describes his dad saving money by cutting his stitches out, rather than going to the clinic.] “You shouldn’t encourage people to do that,” she said. 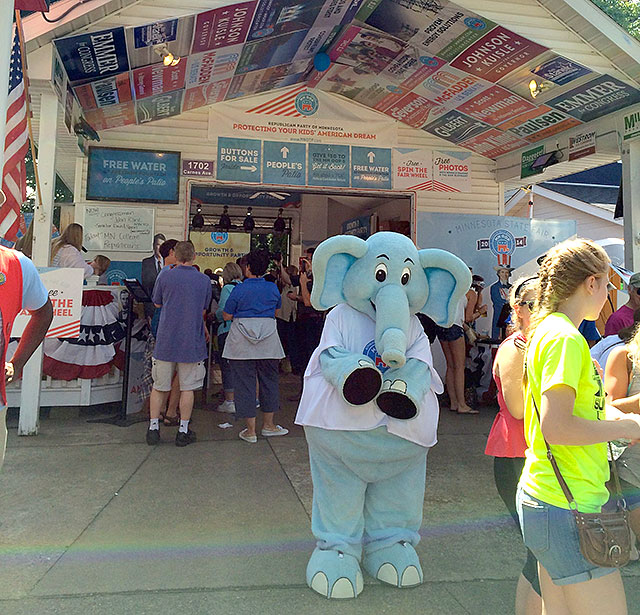 MinnPost photo by Joe Kimball
The GOP Party booth, on Carnes, near Underwood, between Ye Olde Mill and WCCO radio.

Q. Has Supreme Court candidate [Michelle] MacDonald tried to come back to the booth [after she was ordered to leave last week because of her pending court appearance for charges of drunken driving and resisting arrest?]

A. I haven’t seen her, but I wouldn’t mind if she comes back. I’ll vote for her. 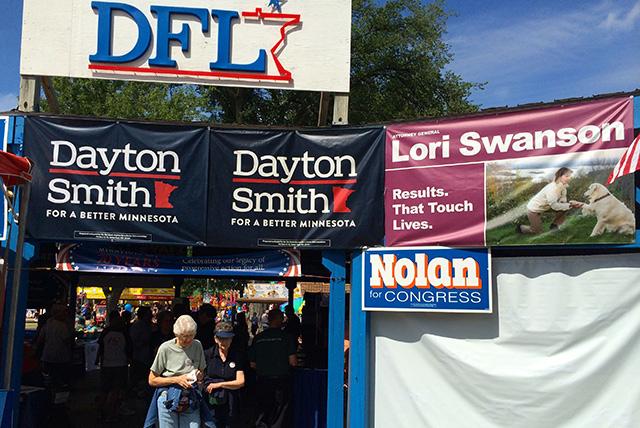 MinnPost photo by Joe Kimball
The DFL booth, on Dan Patch, near Cooper.

Q. Do you ever get Republicans in here?

A. Occasionally. We treat them nice and talk to them. 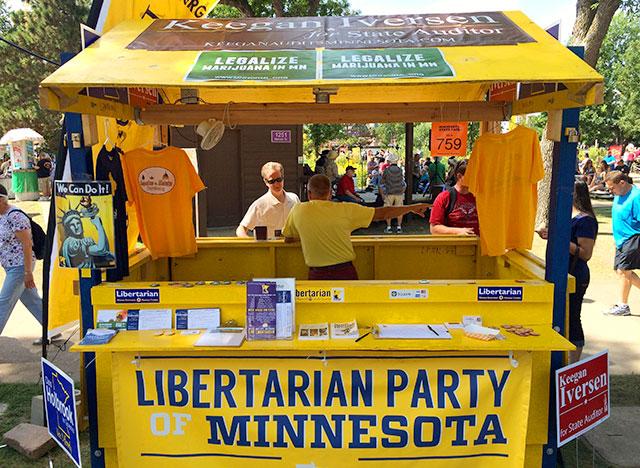 MinnPost photo by Joe Kimball
The Libertarian Party booth, on Nelson, near the DNR building and fish pond.

Q. What do people say about your ‘Legalize Marijuana’ signs?

A. The older people roll their eyes, but the younger ones come over and buy a button. 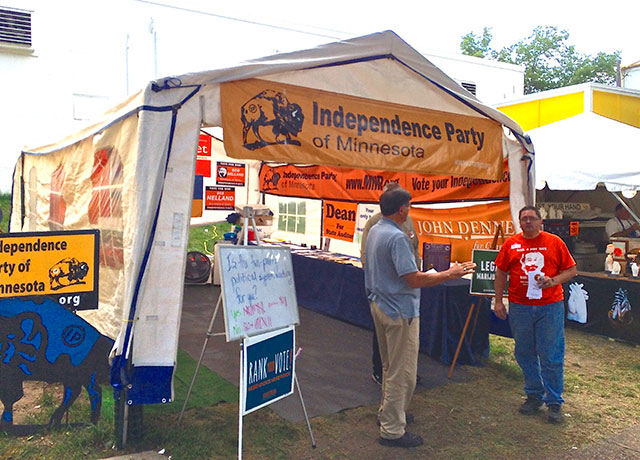 Q. What do people want to know about you guys?

A. How we’re different from the Libertarians. [The IP booth has a ‘Legalize Marijuana’ sign, too.] We tell them we don’t want to end government, we want to rein it in. 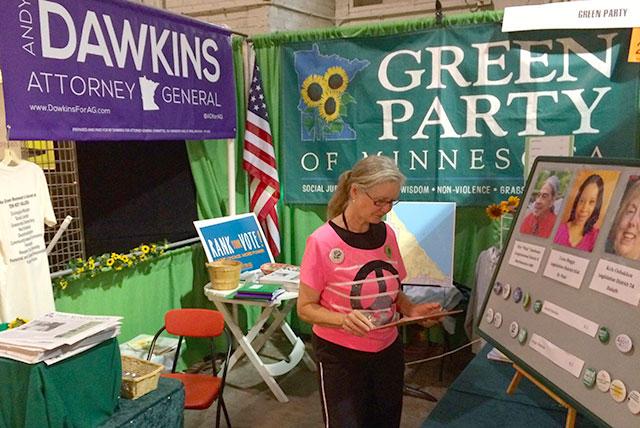 MinnPost photo by Joe Kimball
Green Party booth, on the second floor of the Grandstand.

Q. Do many people climb all the way up here [the 45 steps to the second floor of the grandstand] to talk politics?

A. We were very busier earlier, but now it’s kind of slow. [It was just me.]

Politicking at the State Fair: How campaign workers lure potential voters amid the corn dogs and cheese curds