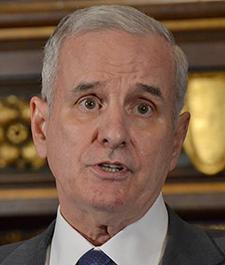 Gov. Mark Dayton has proposed an expansion of the state’s child and dependent care credit, which, if approved by the Legislature, would provide nearly $100 million in tax relief to families.

According to the governor’s office, the plan would  allow more middle-income families to claim a refundable tax credit for costs associated with child care, and dependent care for family members who are aging, or have a disability.

The current law provides tax credits under the Child and Dependent Care Credit to 38,000 Minnesota families. Under the new plan, the number of those eligible would expand to 130,0000.

If approved, the average family would receive $481 under the new plan, with a maximum tax credit of $2,100 per year.

The governor said in a statement about the proposal:

“Rising childcare costs have put hard financial strains on many Minnesota families, making it increasingly difficult for working parents to hold their jobs while assuring quality care for their children. My Child Care Tax Credit helps to provide Minnesota families with options – so they don’t have to choose between working and caring for their families.”

The governor’s office offered these numbers related to the plan: