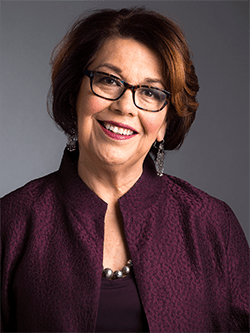 Sandy Vargas said today that she’ll retire in June as president and CEO of the Minneapolis Foundation.

She’s been head of the foundation since 2007, and has furthered its work on social, racial and economic equality. During her tenure, the foundation’s grantmaking has more than doubled, from $37 million to $80 million per year.

In an interview this morning, Vargas, 69, said it’s “hard to leave a job you love and are passionate about,” but that the time is right for a transition.

She led the foundation’s centennial celebration this year, and said she’s proud of how the organization has moved forward in work on creating a more equitable community.

She said: “We’ve made tremendous investments and spent time thinking about ways to transform education and are totally committed to providing a rigorous and relevant education for families and children on the margins of society.”

And she said progress has been made (and more is needed) in providing access to good-paying jobs in the minority communities.

“It’s a great challenge, though, with so many disparities in our community, to create equity and build public policies,” she said.

Vargas said: “I don’t like the word ‘retirement,’ but I plan to take a little rest and then determine what’s next.”

She said she’ll spend time with her mother, now in her 90s, in South Texas and travel to see her siblings around the country.

“After that, I’ll see what’s next on my canvas; I’ve still got a lot to contribute. My energy is high and my health is good and I believe my passion can stay high.”

Norm Rickeman, chair of the foundation’s Board of Trustees, said in a statement:

“Sandy has been an energetic and passionate advocate for everyone in our community, especially the underrepresented. A true community connector, she is a champion for school reform, jobs and civic engagement. Inside the foundation, she has built an exceptional staff, and she has enhanced relationships with donors and the entire community. She has built a platform for continued success that will carry her legacy forward.”

The foundation says that during the past decade, it’s seen a 23 percent increase in the number of Donor Advised Funds it manages, and net assets have increased 22.35 percent “despite several years of external financial turmoil.”

The  foundation’s bio for Vargas notes that she:

… earned her Bachelor’s in Business Administration from the College of St. Catherine and holds a Master’s in Public Administration from Harvard’s John F. Kennedy School of Government. She is active in several Twin Cities organizations and serves on the boards of St. Catherine University, the Minneapolis Downtown Council, Minnesota Comeback, and Wallin Education Partners. She also is an active member of the national boards of Independent Sector, 50CAN, Community Foundations Leading Change, and Hispanics in Philanthropy.