The free-for-all that’s emerging to replace Gov. Mark Dayton in 2018 has spurred some of the gubernatorial candidates to seek an early advantage: tapping into the vortex of Minnesotans descending on the State Fair.

Yes, the election is still 15 months away, but state party caucuses are in February, which is basically a nanosecond away in these days of drawn-out, never-ending campaigns.

And so it’s not too soon to start meeting voters, says Jeff Johnson, the Republican Hennepin County commissioner who knows of what he speaks. He ran for governor in 2014 and had his own booth at the State Fair in both 2013 and 2014. Now he’s back — in the governor’s race and at the fair. “I’ve spent the past three months traveling the state to meet Minnesotans, and now, they’re coming to meet me,” Johnson said at the booth on Friday. “Well worth it.”

He’s not the only one. According to our extensive, minutes-long MinnPost investigation, four guv candidates — Johnson and fellow Republicans Keith Downey and Matt Dean, along with DFLer Chris Coleman — have stand-alone booths at this year’s fair. And while fair-goers will have to decide for themselves about the political utility of said booths, we’ve taken it upon ourselves — as a service to you, Minnesota — to critique the important things: style, location and stuff.

First, though, some background: Each campaign pays the $70 per frontage foot for the space. The booths ranged from 10 to 15 feet, meaning the candidates pay between $700 to $1,000 for the 12 days of the fair. Building and decorating the booths is extra, of course.

All four candidates who have their own spots say they’ll make an effort to be manning their booths whenever possible. And workers and candidates say that, even in these contentious times, they’re finding political discussions with fair-goers to be civil and unheated — even when people disagree. Maybe there’s hope for us after all. 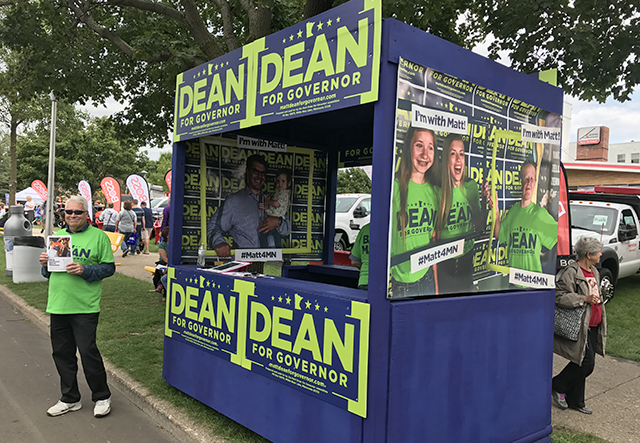 Where to find it: on Cooper Street, halfway between Dan Patch and Randall Avenues. Dean’s booth actually isn’t that far from the DFL booth, the Chris Coleman booth and the AFL-CIO booth, between the Home Improvement building and the Wacky Shack kids’ ride.

The style: familial: Pictures of kids and families highlight the booth, which is deep blue with neon green highlights.

The stuff: Dean buttons are free, and you can pick up a brochure highlighting his background and sign up for campaign info. 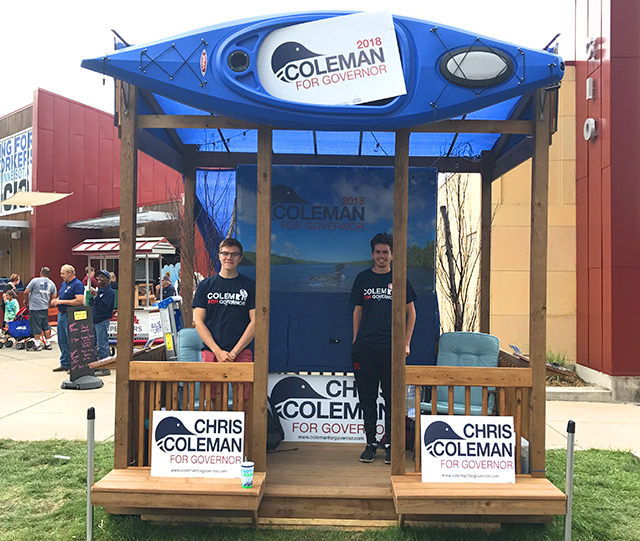 Where to find it: Cooper Street, just north of Dan Patch Avenue. Located right across the street from the DFL booth (where he’s also got a spot, along with five other declared candidates), Coleman’s booth is also in sight of the O’Gara’s booth, where the candidate, in past years, could be found regularly enjoying a brew or playing bagpipes.

The style: Shades of blue make the stand pop, and we like the loon and kayak theme, even if it’s an obvious nod to the notion he’s not just about St. Paul (where he’s still the mayor).

The stuff:  You’ll find Minnesota-shaped fans, or you can get a ‘Coleman for Governor’ T-shirt for $20, but you have to go to the DFL booth to get it. 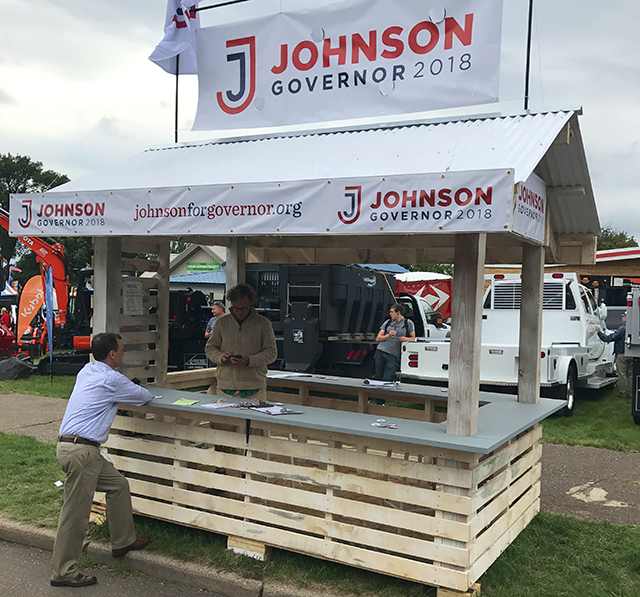 Where to find it: On Cosgrove Street, between Randall and Dan Patch Avenues. Located In a quieter part of the fair, between the 4H building and a truck exhibitor, Johnson says he actually likes this location better than the spot he previously occupied at fairs past: “People are more open to stop and talk,” he said.

The style: Functional and rustic, not that it matters. Johnson often stands in the street seeking to engage with voters.

The stuff: Pro-Johnson buttons are free — as are anti-Met Council ones. You can also sign up for more information (and get on the fundraising mailing list). But there’s also an interactive element: You can fill out a “What Would You Do If You Were Governor?” sheet. Responses included: “Lower taxes,” “Fix health care,” “Protect the 2nd Amendment,” and “Fair redistricting and voting rights.” 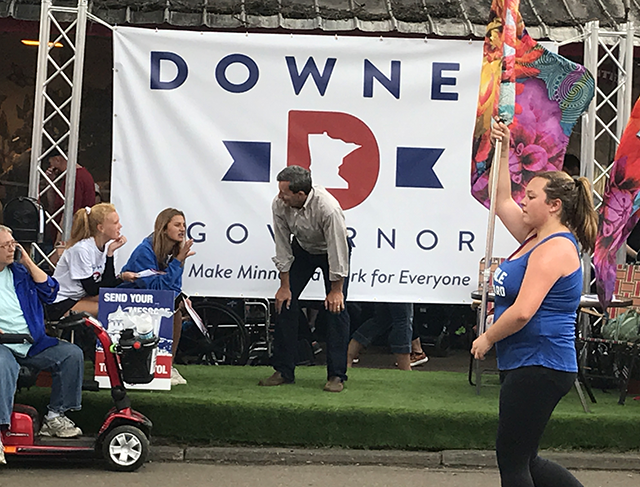 Where to find it: On Underwood Street, just north of Dan Patch. Located right outside the Butterfly House, Downey’s booth sees lots of foot traffic. That means lots of passers-by, but also makes some people less likely to stop and chat. Historical footnote: Downey said he was told that his booth is on “hallowed ground,” because it’s where the late Sen. Paul Wellstone had his fair booth.

The style: Open, with an astroturf floor and patio table, evoking a suburban back-yard.

The stuff: Buttons are free. And you can write a letter to the “Politicians in St. Paul” and put it in the adjoining “mailbox,” no postage necessary.

So what about the other 368 gubernatorial candiates?

Of course, if you prefer to get your politics in one shot at the fair, both the Repubclican Party of Minnesota and the DFL have their own booths. The GOP booth is located on Carnes Avenue, near Ye Olde Mill and the WCCO-Radio booth. It has a table featuring eight glass jugs, representing GOPers who’ve declared as candidates for governor: Johnson, Dean, Downey, Christopher Chamberlain, Jeffrey Ryan Wharton, Phillip Parrish, Dave Osmek and Blake Huffman. Visitors can add kernels of corn to the candidate’s jug of their choice. There was also an Undecided jug, which was fuller than some of the candidates’.

The DFL’s newly remodeled booth, at the corner of Dan Patch Avenue and Cooper Street, features space for the party’s six (so far) declared candidates: Coleman, Tim Walz, Rebecca Otto, Erin Murphy, Tina Liebling, and Paul Thissen. Campaign workers and sometimes the candidates themselves are there to meet and greet voters. 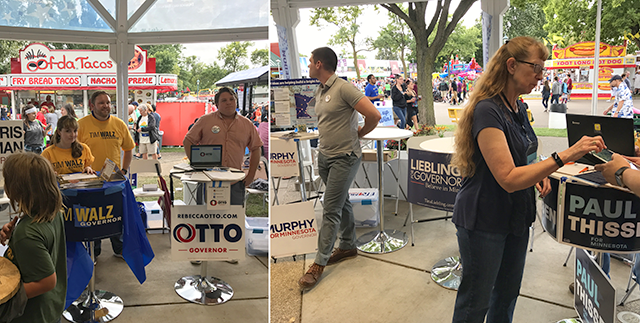 MinnPost photos by Joe Kimball
The DFL’s newly remodeled booth, at the corner of Dan Patch Avenue and Cooper Street, features space for the party’s nine (so far) declared candidates.