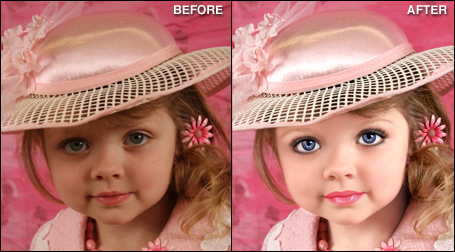 During a season when Christians are expected to reflect on the lowly baby Jesus away in a manger, many are obtaining glamour shots of their own babies, doctoring images for rosier cheeks and clearer skin.

The affordability and widespread use of photo software has made it easy to digitally remove baby acne before mailing out a snapshot of Baby’s First Christmas.

The number of requests for retouched baby pictures has increased by 50 percent over the past two years, said Kim Street, manager of Glamour Shots at the Mall of America. “It’s become a lot more popular. We’ll even out skin tones, create rosier cheeks, apply lip gloss and whiten teeth — if they have teeth.”

“Parents are happier [after the retouching],” Street said. “You don’t want to remember the child with the baby acne or the red spots.”

To meet this demand, her staff now devotes more than half of its efforts per assignment to retouching pictures after they’re shot.

Boris Kobrin, who runs Touch of Glamour in Dublin, Calif., receives 30 e-mails a year requesting “glamorization” of baby pictures. “It’s very hard to do, because they want some glitz and, you can imagine, to do fake eyelashes on a 3-month-old is difficult,” he said. “We don’t particularly like this line of work.”

Growing revenue, declining ages
And yet, it’s a growing source of revenue, so Kobrin reluctantly continues, watching the average age of his subjects steadily drop.

Janet Lovejoy, co-owner of Northern Exposure Imaging in St. Paul, said she tries to use a delicate hand when she retouches baby pictures, focusing on the pink blotches around the eyes that betray a tearful tantrum. “Babies are funny because they have bags under their eyes and wrinkles, and if you take those all off, they really don’t look like babies anymore,” Lovejoy said.

“Sometimes when retouching is done poorly or a filter is used to a heavy extent, people look like burn victims or like they had a really bad facelift — there’s no detail left and no character left in their face.”

There is a brave brand of photographers who refuses to go glam with baby pictures, despite the tempting financial rewards. Michael Proebstle, owner and photographer of Legacy Creative Images in Eagan, is among them.

“I’m about as minimalist as you’re going to get,” Proebstle said, which means he will soften a baby picture or even out the skin tone a smidge, but he won’t create rosier cheeks, darker lashes or whiter teeth. “Not me,” he said. “Presenting people how they are, naturally, is really important in this day and age, when so many things are doctored.”