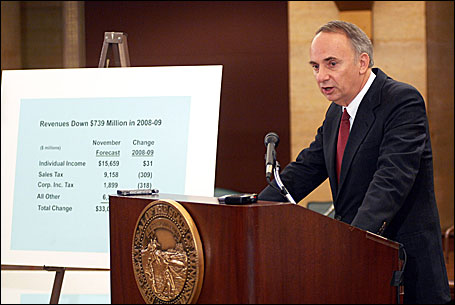 Photo by Craig Lassig
State economist Tom Stinson discusses Minnesota’s budget forecast Friday, noting that the state’s economy is underperforming the rest of the country by a significant margin.

After giving the sobering news that the forecast for the Minnesota’s current biennial budget had plummeted from a $294 million surplus to a $373 million deficit, state Finance Commissioner Tom Hanson first blamed “the impact of a national economic slowdown,” and then stated that “this deficit is a manageable problem and we are well prepared to address it.” Both points put a decidedly sunny spin on the situation.

It was left to state economist Tom Stinson to point out that while Minnesota has certainly been affected by the grim fiscal trends besetting the rest of the nation, our economy is underperforming the rest of the country by a significant margin, particularly in job growth.

After a half-century of above average growth, that state began lagging behind the nation in the fall of 2003, and the gap has exacerbated over the past 18 months. To merely keep up with the rest of the country, Minnesota should have created 30,000 jobs in the past year; instead we generated 12,000, or less than half that total.

As for the “manageable deficit” that we are “well prepared” to confront, well, in this context, short-sightedness is a blessing. Minnesota does have $653 million in its budget reserve and another $350 million in its cash flow account. But these are one-time monies designed to ensure that the state maintain a solid credit rating from the bonding agencies.

By contrast, today’s budget forecast reveals that the inherent structure of our state budget — our existing revenues sources vs. expected costs — is destined to produce a real-dollar deficit of $1.034 billion by 2011. That’s not manageable and we’re not prepared to deal with it.

Oil price miscalculations
That billion dollars in red ink also assumes the existing price of oil will soon plummet, and remain stable, for the foreseeable future. Global Insight, the firm that Minnesota uses to set the national and international parameters for the forecast, predicts that oil will drop to $80 a barrel in the first quarter of 2008, then $75 a barrel in the second quarter, and never go higher than that through 2009.

Previously Global Insight had predicted that oil would be $60 a barrel in the fourth quarter of 2007 — it is currently above $90. “There is a question as to how realistic that $75 a barrel is,” Stinson said this morning.

He’s right to be skeptical. For at least the past three years, Global Insight has underestimated the actual inflation rate, and each time the primary culprit in their miscalculation has been higher than expected oil prices.

This time, Global Insight estimates that $75 oil barrels will yield a 1.9 percent inflation rate. They also peg the chances of an economic recession at 35 percent, and Stinson was compelled to point out this morning that other economists peg it at 40 percent. But even if their conservative, optimistic parameters are right, for a change, Minnesota’s projected real-dollar deficit for the 2010-11 biennium will still exceed $1 billion on 1.9 percent inflation.

Gov. Tim Pawlenty and other Republicans leaders have already declared their opposition to a tax increase to make ends meet. Short of a dramatic and improbable turnaround in the state economy, the alternative is the sort of draconian cuts in state programs not seen since 2003.

DFL leaders have proposed a special session to jump start construction jobs by early passage of a bonding bill, and by closing corporate tax loopholes to net an additional $244 million for state coffers. The corporate tax revision was part of last year’s omnibus tax bill that Pawlenty vetoed because of a provision that would factor in inflation when calibrating the state budget. This afternoon, DFL leaders said they will forego the inflation provision for now, provided the corporate tax revision gets passed in time to close loopholes before firms file their 2007 tax returns. They also said the revenue would go toward closing the deficit. That would mean the local cities and counties originally expected to reap most of the $244 million in last year’s tax bill would be out of luck. If so, they’ll have plenty of company before the books are balanced at the Capitol.

Britt Robson, formerly a staff writer and senior editor at City Pages, covers the state Capitol and politics. He can be reached at brobson [at] minnpost [dot] com.