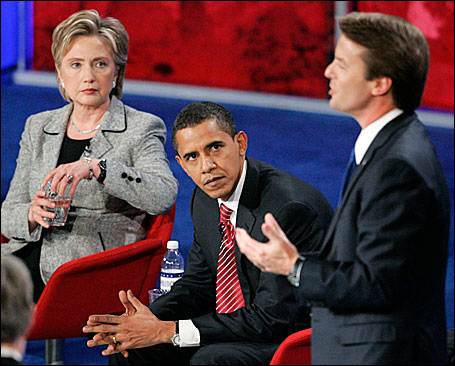 It seems de rigueur for stories about political debates to be structured like accounts of a boxing match. The barb-filled beginning of Thursday night’s Democratic presidential debate in Las Vegas especially lent itself to such treatment, so it was no surprise that much of the post-debate reaction stressed who hit whom (rhetorically speaking), and who hit back with what. The upshot: Frontrunners Sen. Hillary Clinton, Sen. Barack Obama and John Edwards got almost all of the ink (or pixels), though some of the most articulate and energetic policy statements came from Sen. Joe Biden, Sen. Chris Dodd and Gov. Bill Richardson. The Guardian Unlimited’s website account — and it probably wasn’t alone in this — made no mention whatsoever of anyone but the top three contenders.

Joshua Micah Marshall’s Talking Points Memo entry was one of the liveliest of the sports-metaphor genre: “The story going into this debate was that Hillary’s veneer of inevitability had been cracked and that the knives were out for her. But she came out aggressively, and basically knocked Obama and Edwards back. Not that she flattened them, but she was more aggressive than I think either of them were quite ready for.” He concluded that the three-way tussle was “basically a wash and therefore a plus for Hillary.”

Similarly looking at the win-loss score, though employing a different metaphor, NBC’s Chuck Todd predicted, “If the last debate was the moment where Democrats realized that the Clinton coronation was, at least, postponed, this one will be known as the debate that seemed to sharpen the contrast between Clinton and Obama and create a gap between the big two and everyone else.”

Only a few commentators picked up on moderator Wolf Blitzer’s role in all of this; he began the debate with questions tailor-made to set off an early round of personal criticisms and then he posed weirdly narrow ones — designed, Matthew Yglesias of The Atlantic thought, “to embarrass the candidates.” He noted the contrast between the three journalists’ queries and Nevada citizens’ problem-solving, issue-oriented questions. Marshall’s running debate blog resonated with this quip: “9:12 … Is Wolf the worst debate moderator ever?”

Reactions to the substance of the candidates’ remarks were few as well. While those who’ve become jaded from too many political confabs were bored with the rest of the debate, the Nevada event actually covered a lot of territory and evoked distinct priorities and succinct policy positions — and not just on the issues, though both sharp contrasts and nuances came up. On view were striking differences in temperament, judgment, passions and priorities. Particularly impassioned segments included Dodd on education, Biden on Pakistan and Iran, and Richardson on Iraq, energy and immigration.