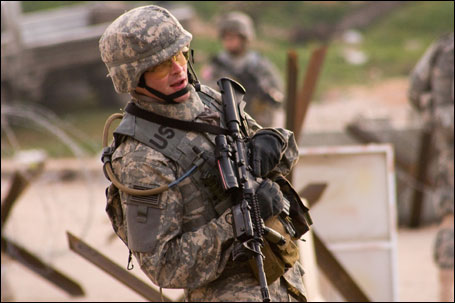 Movies are in a state of high-speed metamorphosis — not to be confused with the mass regression to pre-pubescence that “Transformers,” the year’s second-biggest hit, has imposed on viewers older than age 13.

At a time that series television often seems more sophisticated than Hollywood cinema, film, in turn, is looking more like TV— at least in the technological sense. In growing numbers, multiplexes, including dozens in Minnesota, are projecting current big-screen fare not in 35mm celluloid, but in much the same variety of high-definition video that couch potatoes with disposable incomes have enjoyed for years.

Naturally, the industry’s adoption of domestic technology is being billed as an awesome reason to leave the house: A press release for the Wehrenberg chain’s new multiplex in Rochester, Minn., promises pictures with “incredible clarity and detail boasting a range of 35 trillion colors.” Whoa. Was even “The Robe” that vivid in 1953, when Fox unveiled it in then-new CinemaScope?

If that question sounds impossible to answer definitively, it’s meant to. As cinematic beauty remains in the eye of the beholder, cinephiles of all ages appear sharply divided on the digital revolution. Currently in production with digi-master George Lucas on the fourth “Indiana Jones” flick, Steven Spielberg recently announced that continuing to shoot in good ol’ 35 will be among his last crusades. Still, even this blockbuster king is powerless to prevent the projection of “Indy 4” in digital when it opens next May at theaters such as Mounds View’s Wynnsong 15, whose owner Carmike Cinemas features the technology in almost all its 65 auditoriums in the state.

Meanwhile, Spielberg’s longtime buddy Brian De Palma not only shot his Iraq War drama “Redacted” in hi-def, but has been delighted to screen it that way at film festivals.

“The movie looks magnificent in high-definition,” De Palma says by phone from New York, where “Redacted” recently had its U.S. premiere. “Once you transfer it to (35mm), it loses that feeling of immediacy.” “Redacted” opens today at Landmark’s Edina Cinema, whose manager Hugh Wronski says he doesn’t expect the film’s projection to be digital “for logistical reasons”— even though Landmark maintains a portable hi-def projector in Minnesota and has screened roughly 20 digital films in the last two years.)

How far will you go?
Local movie-lovers with discerning eyes (including this writer) have reported driving dozens of extra miles for the digital projection of a wide-release studio film, frustrated that many Twin Cities exhibitors — perhaps anticipating that digital is the way of the future, or feeling the financial strain of the DVD boom — have become lax in the maintenance of 35mm equipment. To these moviegoers, celluloid scratches and splices, along with pictures that jump and slide out of focus, sometimes wildly, have become intolerable — particularly when hi-def, whether at home or in theaters, carries no such side effects. But cineastes of any tribe, by their own admission, are notoriously picky. What about ordinary folks out for mere popcorn entertainment and a new millennial adventure in simulated butter? Can they tell the difference?

“We formed some focus groups some years back to compare the experiences of audiences in [differently equipped] auditoriums, and the results skewed overwhelmingly in favor of digital,” says Brian Claypool, senior product manager at Christie Digital, a leading manufacturer of digital projectors that installs as many as 400 per month.

While many film purists say the flicker of celluloid gives 35mm images their living, breathing feel, Christie’s sample audiences reportedly prefer digital projectors precisely for their lack of shutters. “There’s no interval between the (digital) images,” Claypool says, “so the presentation is more stable.” So, too — or at least under the proper circumstances — a digital projection can appear sharper and more vibrant.

‘New reality’ goes back to ‘Bible’
Christie’s promotional logo, splashed at lightning speed on screens lit by the company’s projectors, reads, “Welcome to the New Reality” — a way of training the audience to recognize and appreciate a 21st century medium. Since 2005, Christie has partnered with AccessIT, which provides the likes of Carmike Cinemas with films in digital form — whether as lightweight and shippable hard drives or as piracy-protected satellite transmissions. The appeal of digital to the major studios is unmistakable, as it’s far cheaper to create and ship (or beam) a digital print to theaters than a celluloid one.

“We’re unique in the industry for delivering (movie) content via satellite right into what we call the ‘library management server’ of the theater,” says AccessIT spokeswoman Suzanne Tregenza Moore. “And because we offer networking capability to multiplexes, that enables the content to be screened in any auditorium in the building.” (Carmike’s six multiplexes in Minnesota have begun receiving films by satellite.)

Independent companies and filmmakers can benefit from digital, too, as in the case of “For the Bible Tells Me So,” a low-budget documentary whose cost-conscious distributor, First Run Features, has run digital prints in a dozen cities simultaneously, capitalizing on national reviews and Internet buzz instead of waiting to ship a few pricey celluloid prints around the country. 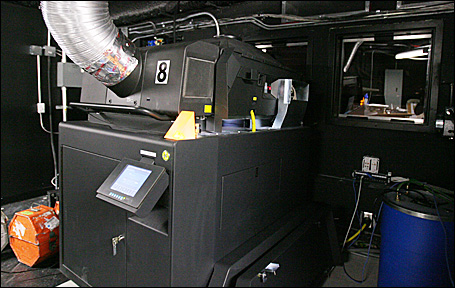 Photo Courtesy of Landmark Theatres
The cost of digital projectors, such as this SXRD from Sony, has deterred many theaters from converting to digital technology.

“For a company our size,” says First Run’s director of theatrical sales Paul Marchant, “it was important to make all the (opening) dates as close (together) as possible. When you have only a limited number of (35mm) prints, it’s definitely more advantageous to go with a digital platform. And with documentaries, many of which are shot on video, even exhibitors who are inclined to run 35mm accept that video is the native format and probably the best choice for projection.”

For exhibitors, “alternative content” on digital includes not just documentaries and indie features, but concert presentations — everything from “U23D,” which screened to rave reviews at the Cannes Film Festival and will be released next year, to Metropolitan Opera performances beamed live to theaters such as Regal Cinemas’ Brooklyn Center 20.

In Minnesota, AMC Theatres, whose Eden Prairie multiplex used to reserve one auditorium for digital projection on a regular basis, currently uses digital only for special presentations, such as the recent 3-D release of Tim Burton’s “The Nightmare Before Christmas,” which opened in mid-October and boasted the weekend’s highest per-screen average. AMC spokeswoman Sun Dee Larson says digital “promises a new world of programming flexibility and viewing experiences,” and that the company is in the process of testing the latest, state-of-the-art digital equipment for its theaters, including those in Minnesota.

New today, old tomorrow?
As digital technology advances by the month, exhibitors of modest means feel some of the same trepidation as consumers of living-room HDTVs. Why invest upwards of $150,000 today in a single digital setup that could be outdated by the time it’s installed?

Landmark Theatres’ director of theater technologies Bryan Linington is in charge of installing Sony‘s brand new 4K projectors — which pack twice as many pixels onto screens as the more common 2K kits — in big cities like Los Angeles and smaller ones such as Baltimore. “When has Hollywood not been about bigger, better, more bold, more brilliant and wow?” says Linington, whose description of the 4k “Blade Runner” restoration as “phenomenal” sounds genuinely convincing.

In south Minneapolis, the newly reopened Parkway Theater has been running a mix of celluloid and digital, though its programmers strongly prefer the former. Barry Kryshka of Take-Up Productions stuck to 35mm for the weekly series of classic film noir that he recently curated at the Parkway. “We don’t want to give our audiences the impression that they could be watching these screenings at home,” Kryshka says.

Tom Letness, who owns and operates the single-screen Historic Heights Theatre in Columbia Heights, says he’s not entirely resistant to digital, but expects to continue with 35mm into the future. “I can’t afford a state-of-the-art digital setup, but, from an exhibition standpoint, I think the future really is digital,” says Letness, whose devotion to vintage-style exhibition includes screening silent films in 35mm to live musical accompaniment on a lovingly restored Wurlitzer.

“I don’t have a problem with nursing 35mm — I’ve been a sprocket-head since I was a teenager,” he says. “But you really have to invest time and energy into film projection. And if you don’t, it’s just not going to come off well. There are so many things that can go wrong with film (projection), and for some people, (35mm) is a big pain in the ass. With digital, if the setup is right, you really can leave it to a candy-counter clerk to just push a button and you’ll have a flawless presentation.”

Unsolved mysteries
Even so, what Christie’s Claypool calls the “miracle” of digital — that “what you see the first time a hi-def picture is projected is the same thing you see the hundredth time or the thousandth time” — seems more true in theory than in practice.

A screening of the second “Pirates of the Caribbean” movie at Wynnsong a year ago skipped like a smudged DVD. More recently, “Michael Clayton” looked handsome to a fault — enough to recall some of star George Clooney’s sillier “ER” episodes — and the audio featured an unfortunately literal demonstration of bad buzz. “Gone Baby Gone” went poof but quick at the Apple Valley’s Carmike 15 one recent Saturday night when smoke alarms sent hundreds of evacuated moviegoers into the parking lot. (Digital projection is indeed hot here, but only figuratively speaking: The theater’s employees say the smoke originated outside the building, came in through the ventilation system, and triggered the alarm.)

Ultimately, most moviegoers will continue to choose the film they want to see regardless of its projection, while a select few will choose digital or celluloid based on the movie. “I wouldn’t want to see ‘The Assassination of Jesse James by the Coward Robert Ford’ in digital,” Wronski says.

His view is perfectly understandable as well as illustratively ironic because, in any style of projection, that old-fashioned Western features shots that are deliberately out of focus to evoke the flawed photography of a hundred years ago. Even if celluloid ends up going the way of the Old West, cinematic imperfection will remain — perhaps the perfect way to ensure the mysterious adventures of moviegoing.

Rob Nelson is a member of the National Society of Film Critics, an adjunct instructor at Minneapolis College of Art and Design and the former film editor at City Pages. He can be reached at rnelson [at] minnpost [dot] com.