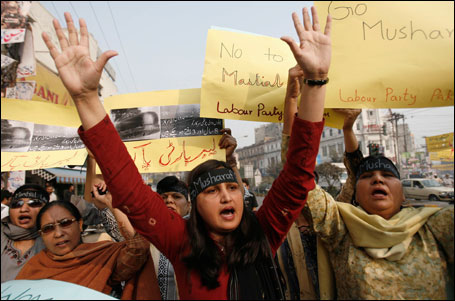 REUTERS/Mohsin Raza
Supporters of the Labour Party Pakistan protest against emergency rule at a rally in Lahore today. A Princeton economist says political repression is a better predictor of terrorism than unemployment rates, education and wages.

“Diamonds or pearls?” may have been the silliest question at last week’s Democratic presidential debate, but another dichotomy — “national security or human rights?” — may be a truly dangerous false choice, according to a new article by Princeton economist Alan Krueger.

You read that right: Krueger is an economist. For at least a decade, he’s looked at terrorism through economic variables, and essentially concluded that unemployment rates, education and wages are not predictors of terrorism; political repression is. I don’t know if Krueger favors sending $100 million to Pakistan to secure its nukes, but I’m pretty sure he’d say securing Pakistani political rights is as vital a national security expense.

Krueger isn’t the first analyst to say poverty doesn’t equal terrorism; as the blog Hot Air notes, Harvard has long churned out studies linking terrorism to political repression. However, Krueger blends his own research and that of others to frame his argument in stark economic terms: “I think of terrorism as a market, with a supply side and a demand side.”

The supply side, he writes, are people “with low opportunity costs,” who “sacrifice less because their prospects of living a rich life are less.” On the demand side, terrorist groups want capable people who can succeed. The supply side group could include anyone in a failing society — the frustrated graduate or the hopelessly poor — but the demand side demands someone with skills; the educated and the achievers.

The demand side explains why terrorists are more often educated. This mirrors Krueger’s own research showing Hezbollah’s self-described martyrs as having higher incomes and education than the Lebanese population they came from. Palestinian suicide bombers also are better educated; 60 percent had more than a high school education, compared with less than 15 percent of the general population. Similar work indicates a higher share of al-Qaeda members as college educated and drawn from skilled professions.

Krueger winds up creating an economic model of terrorism. He plugs in country-of-origin data for “hundreds of significant international terrorist attacks from 1997 to 2003” and discovers “many socioeconomic indicators — including illiteracy, infant mortality and per-capita GDP” — do not correlate with terrorism. “If anything,” he adds, “international terrorists are more likely to come from moderate-income countries than poor ones.”

The true dependent variable? “Countries with low levels of civil liberties are more likely to be countries of origin of the perpetrators of terrorist attacks,” Krueger writes. After studying the nationality of 311 Iraq insurgents, he says, both conclusions hold.

Krueger believes combating supply-side factors that increase terrorism’s lure — “nationalism … religious fanaticism … historical grievances” — are unlikely to succeed. “That suggests to me that it makes sense to focus on the demand side,” he writes, “such as by degrading terrorist organizations’ financial and technical capabilities, and by vigorously protected and promoting peaceful means of protest, so there is less demand for pursuing grievances through violent means.”

Kreuger’s thesis has been surprisingly uncontroversial on the Web. Some see it as support of the Bush Doctrine but others say Krueger isn’t advocating democracy specifically but rather general political freedoms tailored to national conditions. Krueger’s new book, “What Makes a Terrorist” expands the thesis that hopefully breaks through a false dichotomy perpetuated by the media and larger forces.