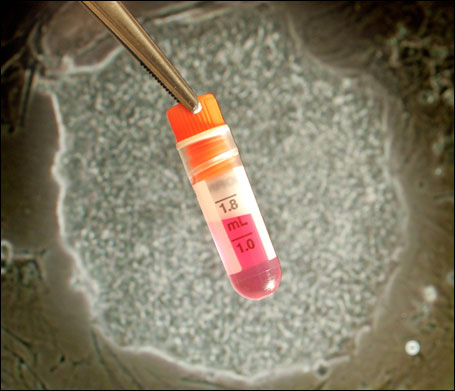 REUTERS/Peter MacDiarmid
An ampoule containing medium for stem-cell storage displayed in front of a photograph of a human embryonic stem cell. Is the stem-cell debate really over?

Good news that breaks during a holiday week faces two likely fates: Either it isn’t much noticed in the hubbub of family gatherings or it’s forgotten by the time normal life resumes. In the case of two major stem-cell breakthroughs announced just before Thanksgiving, the news was plenty big enough to be noticed and remembered by those closest to it — scientists and public-policy watchers are still very much abuzz. But a second wave of discussion is getting much less attention than did initial headlines declaring the end of the stem-cell wars — and its content suggests the wars’ end was declared too soon.

It’s not that scientists are minimizing Japanese and American scientists’ successful coaxing of human skin cells into cells that mimic embryonic stem cells. “It’s exciting, it’s seminal, it’s major — quite frankly I think it’s potentially Nobel-level,” said Dr. Kenneth R. Chien, director of the cardiovascular disease program at the Harvard Stem Cell Institute, in the New York Times. And scientists would certainly like to skirt the ethical issues that have curtailed federal funding of research using new embryonic cell lines. It’s just that myriad challenges lie ahead, and the continuation of embryonic research — the cause of the so-called stem-cell wars because embryos are destroyed in the process — is still seen by many scientists as critically important. To this point, the Christian Science Monitor quotes James Thomson of the University of Wisconsin, one of the breakthrough researchers. Thomson said his new work with skin cells “changes everything and changes nothing. … This changes everything because these are not from embryos.”

But, the Monitor continues, “he adds, it changes nothing because scientists still don’t know how embryonic stem cells morph into the wide variety of cell types in the body. The caution comes because without that information, it’s unclear if the new cells can live up to their promise. Thus, research on human embryonic stem cells is still vital, he emphasizes.”

Another reason for caution is that the “genetic trick” of reprogramming skin cells was done with viruses, and with genes that can cause cancers. Kenneth Miller of Brown University explained some of the issues concisely on “The NewsHour With Jim Lehrer.” Describing the skin-cell breakthroughs, he concluded: “So this is a powerful technology, but all powerful technologies are dangerous. And both groups of researchers have expressed an eagerness in their respective publications to find a way to do the same genetic trick without involving viruses and without involving genes that have the potential to do harm.”

Exciting, powerful — but dangerous and not exclusively useful. That is the gist of the evolving discussion, which always seems to circle back to the demonstrably useful embryonic research. William Brinkley of the Baylor College of Medicine argues for its continuance in a piece in the Houston Chronicle. “The new discoveries generate optimism about future development of techniques that may circumvent the use of human embryonic stem cells,” he wrote. “However, I, along with others in the field, believe that to disregard any procedure that currently holds promise is shortsighted and scientifically risky. Stem cell nuclear transfer already holds distinct promise…. Choosing to focus on only one avenue of research, or type of cell source, would — at this stage of regenerative medical research — be irresponsible, unreasonable and premature. Promising and successful research exploring human stem cells should be supplemented with — not supplanted by — new and potentially exciting approaches, with all forms of research moving forward along multiple independent paths.”

Those wishing to follow the evolving discussion among scientists might check out Stanford University’s lively “Stem Cell Blog.” One of its posters framed the issue this way: “The fact that we’ve got a new kind of cell to work with only underscores why we must push forward with embryonic stem cells and do the experimental comparisons. Embryonic stem cells are the gold standard. Good science dictates that we use that — and no other — before we declare a new standard.”

It appears that we’re seeing a potential end to the stem-cell wars, not a completed one.