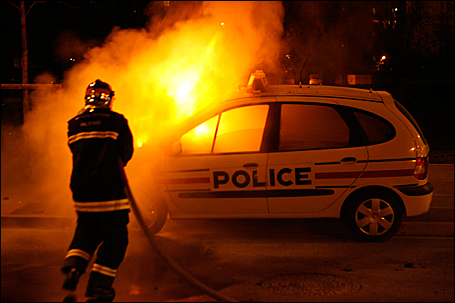 REUTERS/Pascal Rossignol
A firefighter extinguishes a burning police car during clashes after two youths died in a motorbike accident with a police cruiser in Villiers-le-Bel near Paris.

Americans tend to draw two assumptions from the violence that erupted again this week in the shabby streets of Paris’ immigrant suburbs: One, that these riots are part of a jihad perpetrated by Muslim radicals against Western culture, and, two, that they expose an ample dose of hypocrisy in a country that pretends to have erased ethnic distinctions.

The first assumption is almost certainly false. There’s little evidence of Messianic fervor in the violence that began Sunday night in Villiers-le-Bel. Indeed, the tone of alienation among underclass youths, nearly all of them offspring of Arab and African immigrants, seems a close cousin to the generational hopelessness that grips many U.S. inner city neighborhoods, especially black neighborhoods. Even the props are the same: hip-hop music, hooded sweatshirts, expensive cell phones, macho posturing, gamesmanship with the police, single mothers, absent fathers, gangs, fighting, failure in school, high unemployment.

It’s not that the young French rioters want, in any religious way, to “purify” the world; they do, however, want the world to see that France fails to live up to its lofty rhetoric about all citizens being fully French, no matter their ethnicity. The second American assumption, then, the one about French hypocrisy, is almost certainly true.

These ideas are drawn from explanatory essays written since the major outbreak of suburban violence in November 2005, when the world first took notice of long-brewing trouble in the banlieues, the poor and working class suburbs that ring France’s mostly affluent central cities. France is home to one-third of Europe’s Muslims. And it embraces an ideal about full citizenship that most other European countries do not. In Germany, for example, no claim is made that Turkish or Chadian immigrants, even if they are citizens, can be German in the same way as ethnic Germans. But France’s assertion of a higher ideal isn’t working out for complex social and economic reasons, among them the geographic and social isolation of the banlieues.

Artifacts of community disappear
David Rieff explored the situation last spring in The New York Times Magazine: “These cités, as the housing projects are known, suffer from much more than being simply ugly or neglected. Nor is their poverty what sets them apart; there is poverty in Paris itself, after all, and in the French countryside as well. Still less is it their immigrant character: the great French cities, like all major European cities these days, are filled with new immigrants, the majority of them Muslims. And yet there is something particularly soulless and depressing about these suburbs. An increasing number of those who live in the cités have the sense that they are unwelcome in a France whose treatment of them, whether hostile or indifferent, utterly contradicts the claim the country makes for itself: that in France everyone is treated equally and that the Republic neither makes nor will accept any distinction between citizens on the basis of race, class or ethnic background.”

The reputation of France’s metropolitan outskirts as dangerous and culturally apart has developed gradually in recent decades. Public housing projects, once seen as stepping stones to a middle-class life, are now seen as dead ends. People living in them once had industrial jobs. Now those have been replaced by low-paying service jobs, but even those are largely absent in the cités, where shopping malls and other important artifacts of community have disappeared.

It all sounds eerily similar to the Rust Belt decline in the United States beginning in the 1970s. When industrial jobs left, so did everyone with the wherewithal to escape. Those left behind in the worst parts of Detroit, Cleveland, Gary and south Chicago, were poor in ways that were not only economic. Young men, in particular, fell into an alienated lifestyle in which failure became self-fulfilling.

The unemployment rate for young men in many banlieues exceeds 60 percent. Olivier Roy, research director at the French National Center for Scientific Research, wrote: “They complain about racism on the job market, which is true. But beyond skin color, there are also the stigmas of the ‘suburbs’: a specific slang and accent, a way to behave and to dress identify immediately a ghetto inhabitant, while somebody with the same dark skin but mastering the dominant social codes would achieve better. In fact the successful people tend to leave the neighborhood (a move that the riots will accelerate), hardening the ghetto effect.”

Roy’s was one in a series of essays written since the 2005 riots and published by the Social Science Research Council. Another, offered by Columbia University economist Bernard Salanié, says the generous French welfare system may play a small role in blunting work incentives for young men in the banlieues, but that “the (too-high) minimum wage, combined with a rigid education system that has not found a good way to accommodate the needs of the children of immigrants, is the main culprit.”

Sarkozy’s ‘Marshall Plan’
This week’s violence, which subsided Tuesday night after 1,000 riot police were dispatched, poses a particular challenge to President Nicolas Sarkozy. He was interior minister during the 2005 riots. His tough stance (calling rioters “scum” and vowing to clean them out with a “Kärcher,” a brand of high-powered hose used to wash off graffiti) earned him enemies and friends. During last spring’s election campaign, he avoided the suburbs. But Wednesday he visited a wounded police captain in the north Paris suburb of Eaubonne before meeting at the Elysée Palace with the families of two teenaged boys whose deaths triggered the latest trouble. (Their motorbike collided with a police cruiser.)

The violence this time was brief, but more intense. Rioters fired shotguns at police. Sarkozy has promised a “Marshall Plan” for the suburbs, to be announced in January. The plan, according to The Economist, must deal with two major issues: “the failure of the French economy to create enough jobs, and the tense relationship between the police and local youths. The unemployment rate in the banlieues remains more than twice as high as the national average [and] as for policing, France is hamstrung by a sterile debate that pits the left against the right over police methods. The left Ã¢â‚¬Â¦ accuses the right of inflaming tension with heavy-handed techniques. In reply, Sarkozy insists that those methods were too lax, treated policemen like social workers not law-enforcement officers, and prefers a strong hand to clamp down on criminality.”

The president said Wednesday that “what happened is absolutely unacceptable; it is not something we can tolerate, no matter how dramatic the deaths of these two youngsters on a motorbike may be.”