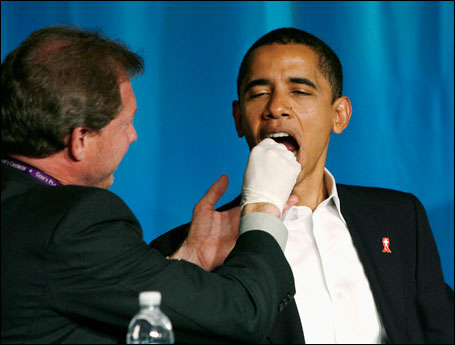 REUTERS/Mark Avery
Barack Obama gets an oral AIDS test at an AIDS summit in California last year. Obama and Hillary Rodham Clinton are in an increasingly heated debate over health care.

HillaryCare or ObamaMD? Health care was the spat du weekend in the increasingly heated Democratic presidential fight — and about time, since the conflict showcases one of the Big Two issues for likely primary voters, and the biggest domestic issue this side of Iraq.

Campaigning in Iowa, Hillary Rodham Clinton lambasted Barack Obama’s plan as “crafted for politics” — a double hit targeting substance (he allegedly leaves 15 million people uninsured; she covers everyone) but also image (he’s the duplicitous pol; actually Clinton’s Achilles Heel). For his part, Obama said Clinton’s plan wouldn’t save patients as much and her method of universal coverage (financial penalties if you don’t buy in) was so vague as to render her universality advantage meaningless (I’m rubber, you’re duplicitous glue!).

So who’s right? Slate’s Timothy Noah has made candidate health care plans something of an obsession; in a pithy series this summer, he noted some of the key differences between Clinton’s plan and Obama’s:

· That’s because, as noted by Clinton on the stump, her plan is more universal: she mandates everyone get coverage, Obama’s extends only to children. Like Obama, Noah says Clinton’s enforcement mechanism — a financial penalty? Then jail time? — is vague, probably unenforceable, and may even be unconstitutional. (He notes the jury is still out on Massachusetts’ similar scheme.) Noah states flatly, “the ‘my plan is more universal than your plan’ taunt that [John] Edwards and Clinton direct toward Obama is meaningless” — and he wrote this well before the past weekend’s dust-up. However, Obama is no prince; he hasn’t specified how he will meet his less-sweeping plan to cover 9 million uninsured kids.

· Sticks aside, here are the carrots: Clinton would open up the private plans that cover Congress and federal workers (which include dental and mental-health coverage) to anyone who can pay the premium. For those who can’t afford it, or have pre-existing conditions, there’s a Medicare-like public option. (If you currently have private insurance, you can keep it, which is sort of Harry-and-Louise insurance for Clinton.) Obama has his own public-health insurance program, featuring subsidies for lower-income patients. However, it’s limited to the self-employed, small-business employees, and those whose companies offer no health insurance.

· Risk: there’s a chance Clinton’s doppelganger plan could be more limited and more expensive than Congress’s current plan. Insurers could also bail on the feds rather than include the general public, who are said to be sicker than current federal workers. As for the “Medicare plus” offering, it’s susceptible to the same cost explosion that dogs good ‘ol Medicare. Noah notes Obama’s plan would cause larger businesses to abandon their current plans “in droves” (as opposed to the headlong abandonment going on now), which is probably also true of Clinton’s plan.

· Both candidates also subsidize their proposals by allowing the Bush tax cuts for people making over $250,000 to expire in 2010.

A couple of caveats: health care is nothing if not complex, and there are many details and pitfalls unmentioned above. (One that I’d like to see more analysis of: Clinton proposes an income-based capping of insurance premiums, sort of like the property-tax circuit breaker Minnesota once relied heavily upon to lessen the property-tax burden for seniors and lower-income homeowners.) To keep today’s analysis focused, we had to exclude the rest of the Democratic field. The third wheel in the Democratic race, John Edwards, was actually the first with many of these ideas, and some consider his plan the best. If you resent the complexity of the Big Three plans, Dennis Kucinich is your single-payer, universal-health-care guy.

Finally, a debate over health care