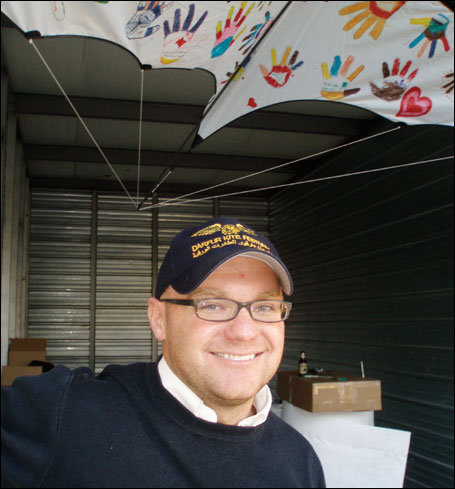 Photo by Jay Weiner
Patrick McGrann, co-founder of Kitegang, who is now in Darfur.

The gunshots on the phone line worried Bill McGrann. After all, his son, Patrick, was on the other end of the conversation, on the other side of the globe.

“I could hear shell fire in the background,” Bill McGrann said of his satellite-phone chat earlier this year. “I couldn’t tell if it was artillery, but I knew it was more than small-arms fire.”

He knows that Patrick has a keen knack for picking real garden spots for his work … you know, like Darfur.

War. Sand. Hunger. Wind. Orphans. That’s where Patrick McGrann, 32, is right now, at a refugee camp tucked on the Chad-Darfur border. That’s where the gunfire was last spring, when he was in the region for the first time.

“He follows his own drummer,” said his mother, Judith McGrann, who owns a popular and eponymous global crafts and clothing store in St. Louis Park. “Patrick’s a Pied Piper. He has the ability to relate to kids in such a positive way. There’s all sorts of people trying to bring food and medical aid. He’s there to feed their spirit. That’s Patrick.”

Diplomacy in the skies
Over the weekend, he arrived at the United Nations-backed camp to teach children how to construct and fly kites. He’s a founder of Kitegang, a tiny Minnesota nonprofit with a big vision.

The Vikings’ Adrian Peterson, on a good knee, can rush for 296 yards, but can he get 3,500 children in a squalid refugee camp to fly kites in unison in an attempt to break the world kiting record? That’s Pat McGrann’s goal. He’s my Sportsman of the Year, hands down.

I recently wrote a long story about McGrann for The Christian Science Monitor.

I’m going to direct you there for details of Pat and Kitegang. (The Monitor’s lawyers say I have to … for 90 days.)

But I can repeat that his goal is to break the planet’s kite mark — now at 1,100 kites at once in the sky — with kids from Darfur in that camp. The target date was originally set for Nov. 20, which is Universal Children’s Day, but …

En route to Africa, Air France lost some kites McGrann and friends had packed in boxes in a mini-storage garage in St. Louis Park. And, as he wrote me in an email last Monday from his hotel in N’Djamena, Chad’s capital, “DHL is showing a remarkable inability to deliver materials from Sweden to Chad.” The record may have to wait a week or so.

Wednesday, in another email, he reported he bought 2,000 sticks of bamboo for the kites from a taxi driver. The stash cost him $15 or 6,750 cfa, the Chad currency. “I gave him 7,000 and told him to keep the change,” McGrann wrote.

Sports and peace
For more than two decades, I’ve covered Winter and Summer Olympics. Those festivals have always been dipped in political meaning.

In the good old days of the Cold War, international competitions were often labeled “war without weapons.” Surely, the staging of Olympics create nationalistic and/or development narratives; if South Korea can stage a Summer Games in 1988, it must have emerged as an economic power; if South Africa can play host to the 2010 soccer World Cup — as it is slated to do — it must be a nation of substance. We know how China plans to use the 2008 Olympics as its punctuation mark on its arrival as a super power.

Cynics scoff at the notion that sports can be a force for diplomacy. To them, it’s all about betting, testosterone and batting averages. But sports and what many in the world call “physical culture” can be a vehicle for nonviolent communications, too. The professional leagues — particularly the NBA with its contingent of international players — have reached out to children worldwide. Even at their Friday game against Washington, the Timberwolves raised funds for Nothing But Nets to help prevent deaths from malaria in Africa. The Olympic community has been active in Kosovo and in several African nations.

Patrick McGrann, born, raised and living in Minneapolis, is a one-man diplomatic band. I’ll follow his exploits at MinnPost.com. And I’ll keep track of his phone calls back home. With shooting in the background, Mom and Dad need some support, too, you know.