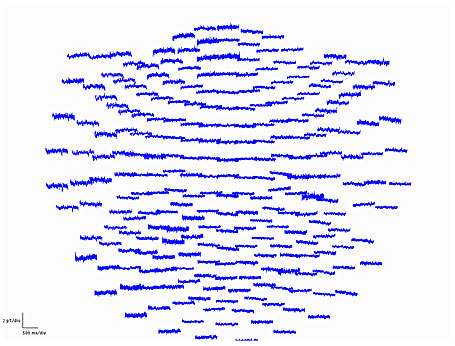 A scientist at the University of Minnesota claimed recently that a brain scan machine he uses for research is so safe that one day people will be able to use it at the state fair, the mall or the science museum to find out just what’s going on inside their heads.

That got me to thinking. What’s it like getting a scan on a machine like this? Do you stick your head in a bucket? The only way to find out was to visit the Brain Science Center at the Veterans Affairs Hospital, where the university is conducting the research, and try it myself. Turns out, the bucket thing wasn’t that far off.

Dr. Scott Lewis, a big guy with a pink face and hair as white as his lab coat, led me to the chamber where all this happens. (Lewis is one of the researchers, but not the principal investigator who made the claim. That’s Apostolos P. Georgopoulos, MD., Ph.D.)

It’s called a magnetoencephalography, or MEG. The machine is enclosed in a vault, about 15 feet long, 10 feet wide and 8 feet high, maybe 5 inches thick. The dense casing is designed to block outside interference. The machine is so sensitive that measurements can be thrown off by something as simple as a wrist watch on the arm of somebody standing on the other side of the door, Lewis said.

Locked in a crypt
Inside is a gurney in front of what looks like a giant hairdryer like you’d find in a salon. The hood is filled with helium to super cool 248 sensors that take 1,000 readings a second of the magnetic field that every brain creates. It compares the readings from each of the sensors to each other. That’s 30,628 computations, in case you were wondering.

I lay down on the gurney and looked up at the white squares of a false ceiling. Lewis slid the hood over my head, covering from about my eyebrows to the back on my neck. It would probably be uncomfortable for the mildly claustrophobic. It smelled like plastic.

When Lewis left the room the door shut with the thunk I associate with being locked in a crypt. Speaking over a microphone, he asked me to look at a solid dot of white light, about the size of a dime, reflected on a mirror in front of me. The idea is that concentrating on the light would keep my eyes straight and my mind unthinking, sort of brain in neutral.

“No one in the world analyzes data this way,” Lewis said.

Squiggly lines
MEG is used in some cases to spot the focal point of epileptic seizures. Years ago, Georgopoulos, the principal investigator on the research, noticed that mentally healthy people give off surprisingly similar squiggly lines. People with illnesses such as multiple sclerosis or schizophrenia give off another set of lines, each peculiar to their own illnesses. The pattern of chronic alcoholics becomes increasingly normal as they dry out, he said. Georgopoulos and his colleagues published a paper about the findings last summer in the Journal of Neural Engineering.

So far the Brain Science Center has run tests on about 300 people from 8 years old to their 90s. Georgopoulos would like to do a thousand so it can use the information to diagnose mental illness.

“In two years, maximum, it will be available to screen for multiple sclerosis and Alzheimer’s Disease,” Georgopoulos told me. “Every hospital will have a MEG in the next five years.”

So are we going to be checking our brains at the State Fair someday? Given that the thing costs $2 million, weighs seven tons and is super sensitive to extraneous magnetic fields, it’s hard to imagine it in on Machinery Hill, or anywhere close.

And what about MY brain? Because the research is not for clinical or diagnostic use there are no individual results, yet, I was told. Darn.

How I got my brain scanned