Planning is under way to build a massive plant in Duluth’s inner harbor to produce 500,000 tons of wood pellets every year to ship to Europe’s power plants — at a time Minnesota utilities are struggling to find enough wood to burn in their own boilers.

The facility would be Minnesota’s largest wood-processing plant, creating as many as 400 permanent jobs.

The plant would be an economic boost to the ports region, especially a logging industry reeling from a decline in home construction.

But the proposal — signaling rising interest in wood as a fuel source for utilities seeking to reduce reliance on coal and oil — is igniting a debate over the economic and environmental effects of using wood for fuel on a grand scale, especially to ship off to Europe.

“It is not appropriate to overharvest a small portion of the Upper Midwest forest for a feel-good fuel in Europe,” said Don Arnosti, forestry coordinator for the Minnesota-based Institute for Agriculture and Trade Policy. “Do we really want to become a resource colony of Europe?”

At full production the facility would convert each year 1.2 million tons of fresh-cut wood into 500,000 tons of dried pellets for shipment to power plants in Europe that, like those in Minnesota and around the country, are intensely searching for alternatives to burning carbon-spewing coal and oil whose gaseous emissions are linked to global warming.

Increased truck traffic
The Duluth plant would be built by the Kedco Group of Cork, Ireland, an international renewable-energy company with a specialty in large wood-pellet boilers in Europe and elsewhere.

Through a local agent, Kedco has notified the Minnesota Pollution Control Agency (PCA) that it will seek air-quality permits for emissions from wood-drying operations associated with the plant.

Kedco told the PCA that it plans to harvest timber from forests within 60 miles of Duluth and haul the wood by truck to the waterfront plant, where the timber would be dried, pelletized and dried again (water makes up half or more the weight of green wood). By one estimate, the proposal would add 50,000 to 60,000 truck trips to Duluth-area traffic each year. That’s about 1,000 additional truck trips each week.

Kedco spokesmen declined comment on plant specifics, including its estimated cost and construction schedule. But a company consultant acknowledged that “there have been several discussions” with the Department of Natural Resources (DNR) and PCA about the company’s plans and that Kedco “is diligently moving ahead with this project,” which would occupy 80 acres in the harbor area. The plant would be built in three phases over several years with limited production after each phase is completed.

Extrapolating from published numbers from wood pellet plants planned in Wisconsin and Michigan, the Duluth plant likely would cost between $85 million and $100 million to build. At full production it would directly employ at least 250 full-time plant workers and at least 150 loggers. 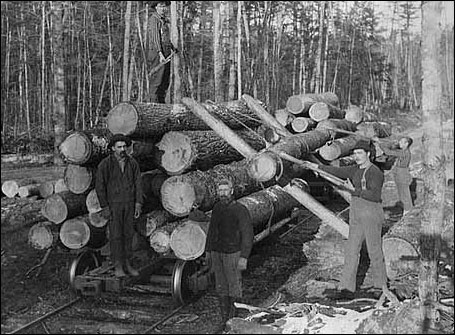 Photo courtesy of the Minnesota Historical Society
Workers load a logging train near Duluth around 1885. Logging has long been an important part of Duluth’s economy, and now a huge new wood-processing plant has been proposed for the area that would process 1.2 million tons of fresh-cut timber each year.

Lowest value for wood
A full-scale environmental impact statement (EIS) will likely be ordered. The last time a major wood processing plant was proposed — UPM/Blandin’s Thunderhawk paper machine in Grand Rapids — it took a year to complete an EIS. The Thunderhawk plant — not yet under construction — would consume an additional 300,000 cords of wood, far less than would be processed at the Kedco facility.

“We will be very interested in this plan,” said Matt Norton, an attorney for the Minnesota Center for Environmental Advocacy. The prominent St. Paul group monitors a broad range of environmental issues and recently went to court to challenge an EIS for the Minnesota Steel’s taconite plant near Nashwauk.

The DNR has publicly favored increasing commercial harvest of the state’s timber. An industry-dominated forestry task force co-chaired by DNR Commissioner Mark Holsten recommended to Gov. Tim Pawlenty in July that commercial production from forests in the state be increased 50 percent, from 3.7 million to 5.5 million cords annually within next five years.

But a “generic environmental impact statement” warns that increasing timber production to that level could significantly harm the state’s woodland environment.

“Burning wood for fuel is the lowest value you can assign for wood,” said the Sierra Club’s Clyde Hanson. “We denuded the forest once for home heating and railroad locomotives.”

Hanson, a forestry specialist with the influential environmental group, predicts the proposed plant will have to harvest beyond 60 miles from Duluth for its wood, in part because it will be competing for timber with paper-making plants in Duluth and nearby Cloquet.

“Harvesting that much wood in such a small area is simply not sustainable,” Arnosti said.

Seeking clean energy
DNR Commissioner Holsten could not be reached for comment, but the agency’s biofuels coordinator, Mark Lindquist, said, “We’re very interested in the renewed desire of the governor and the forest industry to increase timber production.”

Minnesota recently adopted the Next Generation Energy Act, an aggressive renewable fuels law that was eagerly signed by Pawlenty, who has made clean energy a signature issue in his role as chairman of the National Governor’s Association.

The “Next Gen” law mandates that utilities produce 25 percent of their power with fuel other than carbon-ladened coal and oil by 2025, and that over-all carbon emissions be cut by 80 percent by 2050. This has touched off a rush to search out alternate fuels, including wood, to stoke boilers.

“Biomass (wood) has a role to play in renewable energy,” Arnosti said. “The problem here is that a fundamentally good idea is being supersized to an inappropriate and unsustainable degree.”