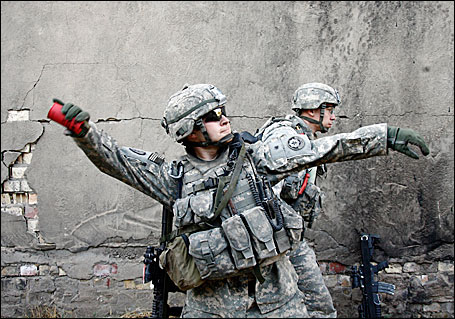 Stefano Rellandini / Reuters
Staff Sgt. Russell Massey, of Michigan, throws an incendiary grenade Tuesday during a patrol in the neighborhood of Muhalla 834 in Baghdad.

There are two ways to look at the congressional Democrats’ new report asserting that the actual cumulative cost of the wars in Iraq and Afghanistan now approaches $1.5 trillion, double the White House estimate.

One is to accept the report’s implication: That the wars’ enormous costs aren’t worth the sacrifice; that the money spent so far — roughly $21,000 for every American family of four — has been a shameful waste, even aside from all the lives lost and the suffering inflicted. U.S. Sen. Charles Schumer, D-N.Y., chairman of the Joint Economic Committee, said as much when he told the Washington Post: “What this report makes crystal clear is that the cost to our country in lives lost and dollars spent is tragically unacceptable.”

The other interpretation is that it is money well spent; that whatever the wars’ cost and whatever sacrifices have been incurred, they are a necessary price to pay given the monumental stakes involved; that the United States would be far worse off had it not invaded and occupied Iraq, and that, indeed, failing to act in the face of grave threats would have been unthinkable.

The 21-page draft report, obtained by the Post, estimates the wars’ external costs, then adds them to the $804 billion either spent or requested by the Bush administration through 2008. Among those “hidden” external costs are investments that might otherwise have been made by U.S. companies in the domestic economy, disruptions imposed by the deployment of reservists and National Guard troops, and some of the tripled cost of crude oil since March 2003, when the U.S.-led invasion of Iraq began. (The report says that $4 or $5 of the $90-per-barrel cost is because of the disruption of Iraqi supplies.)

The question of whether the war in Iraq is worth its cost, both in money and in human misery, came to a head Tuesday when President Bush vetoed the Democrats’ top-priority spending bill to fund health, education and labor programs. Sen. Harry Reid, the Democratic leader from Nevada, responded by threatening once again to cut off funding for the war, setting up an election-year confrontation: Democrats arguing that the war is a terrible waste of money and humanity, and Republicans accusing Democrats of being unpatriotic and too eager to spend unneeded money on domestic problems.

Evaluating the cost and worth of the Iraq war stands at the center of the debate. Sure to return are arguments about the wars’ original reasons — not in Afghanistan, perhaps, where pursuing Osama Bin Laden and his Taliban protectors was supported by a broad national consensus — but certainly in Iraq where the initial justifications seemed to evaporate one by one.

Personal context
The wider social and historical context of war provides another avenue of evaluation. Sometimes that context gets intensely personal, as with the essayist Christopher Hutchins. Hutchins discovered that his enthusiastic writings in favor of the Iraq war influenced a young UCLA graduate to enlist in the Army. The young man, Lt. Mark Daily, 23, was killed by a roadside bomb near Mosul last Jan. 15. Hutchins explored his feelings about that in an extraordinary article in this month’s Vanity Fair. In one of his letters, Daily had linked “a passage from one of my articles, in which I poured scorn on those who were neutral about the battle for Iraq,” Hutchins wrote. “I don’t remember ever feeling, in every allowable sense of the word, quite so hollow.”

He continued: “So, was Mark Daily killed by the Ba’thist and bin Ladenist riffraff who place bombs where they will do the most harm? Or by the Rumsfeld doctrine, which sent American soldiers to Iraq in insufficient numbers and with inadequate equipment? Or by the Bush administration, which thought Iraq would be easily pacified. Or by the previous Bush administration, which left Saddam Hussein in power in 1991 and fatally postponed the time of reckoning?”

Historical context
Seeking blame, in the midst of war, for the death of a single soldier seems oddly indulgent in the cruel context of history, according to Adam Kirsch, in a New York Sun review of “No Simple Victory,” by the British historian Norman Davies. The book offers a stark departure from the Anglo-American take on World War II in Europe, viewing it not as a noble struggle but a brutal bloodbath waged primarily by two villainous sides, Germany and the Soviet Union. Stalin’s tactic of placing “blocking regiments” to shoot deserters created a “front-line zone of maximum physical danger” for Red Army troops, Davies wrote, who then fought with a feeling of “psychological liberation, even of gay abandon, [rushing to their deaths] “with hurrah on their lips.”

The Western counties can no longer accept that kind of carnage, no matter the stakes, wrote James Kurth in the American Conservative magazine. The reason is low birth rates. “Today it is very rare for a child in postmodern society to die from disease while his parents are alive,” Kurth wrote. “And if he should die in military combat, this is seen as a shocking surprise. Indeed, for one of these rare children to die in such a rare way will increasingly seem a unique catastrophe and an unacceptable scandal. This is particularly true for the children of the professional class — the liberal professionals and the professional liberals. This class, of course, is especially large and dominant in the information economy and postmodern culture.” Kurth said that that places the U.S. and its allies at a disadvantage against adversaries more willing to shed blood.

Bruce Bawer writing about the “Peace Racket” in City Journal, also worried about the West’s resolve. “It’s better to be strong than to be weak,” he said. “You’re safer if others know that you’re willing to stand up for yourself than if you’re proudly outspoken about your defenselessness or your unwillingness to fight.”

The liberal social critic Todd Gitlin explores the depths of the Left’s reluctance to “be patriotic” in the terms that the Right wants to dictate, according to Wilfred McClay’s review of Gitlin’s new book, “The Intellectuals and the Flag.”

In it, Gitlin launches an attack on the intellectual Left’s “narcissistic retreat into self-proclaimed ‘marginality,’ an obsession with ever more minute forms of identity politics and the infinite ‘problematizing’ of ‘truth,’ a reflexive opposition to America and the West, and an immurement in ‘theories’ whose radicalism is so pure that they never quite touch down to earth — follies all underwritten and protected by the perquisites and comforts of academia.” The results have harmed liberalism as a political force, Gitlin argues, best symbolized, perhaps, by its “rejection of patriotic belief.” The author traces this to the Vietnam era, during which patriotism became viewed as “an abandonment of thought” and a “calculation of political advantage” by the Right, rather than a sentiment of “genuine warmth and intelligent affection.”

Gitlin would probably argue that playing the patriotism card is still a potent political tactic to be employed again in 2008, when the central question will be: “Is the war worth it?”