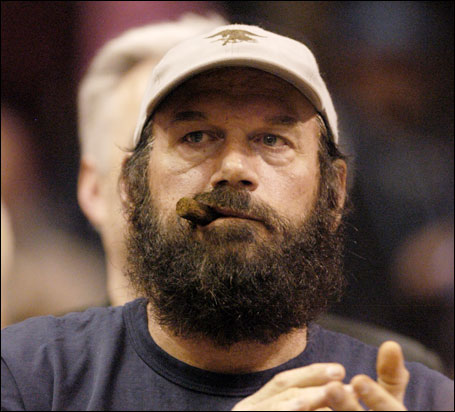 Maybe former Gov. Jesse Ventura doesn’t have time to bleed, but he’s got time to write.

MinnPost.com has learned that the wrestler-turned-politician will have a new book on the shelves in April: It’s called “Don’t Start the Revolution Without Me!” and is co-written with author Dick Russell.

Ventura, who is traveling this week via RV to his winter home in Cabo San Lucas in Mexico, hasn’t said anything publicly about the new book, which is being published by a small New York City publishing house, Skyhorse Publishing.

The governor was unavailable Wednesday while traveling; he reportedly does not have a cell phone.

But he did talk about the book to friends at a party recently. “I’m surprised word isn’t out yet. It seems like he tells everyone. Of course, after he told me about it, he said: ‘Don’t tell anyone about it.,’ ” said John Wodele, Ventura’s former press secretary.

“I know he’s been working on it a couple years,” Wodele said. Ventura lives in the St. Paul suburb of Dellwood during the summer months, but left this week for the winter place, he said.

Here’s how his agent, Steve Schwartz, describes the book in a recent notice to folks in the publishing world:

“[Ventura is revealing] why he left politics and discussing the disastrous war in Iraq, why he sees our two-party system as corrupt, and what Fidel Castro told him about who was really behind the assassination of President Kennedy.”

Ventura was on some bestseller lists with his 1999 book: “I Ain’t Got Time to Bleed: Reworking the Body Politic from the Bottom Up.”

Bill Wolfsthal, associate publisher of Skyhorse Publishing, said he’s read parts of a draft of the new manuscript, which hasn’t been edited yet.

“He’s critical of Democrats and Republicans and of politics in America,” Wolfsthal said. “In the book, and when he goes out to publicize the book, he’ll have a lot to say about the presidential elections.” He says one “problem with our two-party system is that it’s only one party more than the Communist system.”

Neither Schwartz nor Wolfsthal would reveal the amount Ventura received for an advance.

“Some of the information we might ordinarily reveal, we’re keeping close to the vest because of the kind of public official he was,” Schwartz said.

Wolfsthal, when asked about the advance, said; “We’re a small independent publisher, as opposed to a big corporate publisher, so you can assume what you want from that.”

The hardcover book will sell for $24.95 in stores, Wolfsthal said.