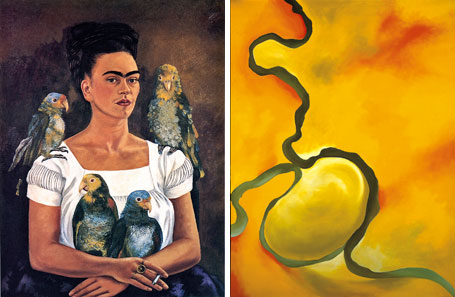 It’s pure coincidence that two major shows on two top 20th century artists are running concurrently in Minneapolis, but art lovers of all stripes will find it a happy accident.

These artists in particular have achieved a measure of popularity – in one case, cult-figure status — well beyond the often clubby confines of the art world. Georgia O’Keeffe (1887-1986) is the cool, subliminally sensual, semi-abstractionist whose work is presented at the Minneapolis Institute of Arts; Frida Kahlo (1907-1954), the passionate, furiously self-reflective semi-surrealist, is the focus of an exhibition originating at the Walker Art Center.

Clearly, little links their work on an aesthetic level, though both began working in the first quarter of the 20th century and had at least a passing acquaintance. And, of course, both were painting at a time women had to fight to be taken seriously.

That both were married to famous artists – O’Keeffe to pioneering modernist photographer Alfred Stieglitz, Kahlo to Mexican muralist Diego Rivera – was a double-edged sword; it gave them entree into the era’s art world, but meant they often stood in their spouses’ shadows.

Their work has since received its due, of course, and more. O’Keeffe’s art had always drawn respect, and by the late 1920s she was selling pieces for more than $20,000 each. Renewed interest in her art built in the early 1960s and by the 1970s she had gained widespread recognition, in and out of the art world. For Kahlo, the 1983 publication of Hayden Herrera’s celebrated biography, “Frida,” launched the artist into the pop-culture stratosphere she now inhabits.

Open to interpretation
Despite their disparate artistic concerns, both artists created almost stubbornly personal work, yet it is art that speaks to a huge audience. Perhaps adverse circumstances forced them to stick to their unique visions – to be dismissed as mere followers would have been unbearable, and how else could they have kept making art without such single-minded purpose?

As for what makes them so compelling to such a wide public today, maybe it’s because their art can be read on so many different levels.

Was O’Keeffe painting pretty flowers, or lyrical vaginas, or both? (Sometimes an avocado is just an avocado.) Is Kahlo’s work quasi-religious, filtered through densely layered art-historical references? Or, with her numerous self-portraits, is she the quintessential feminist fetish image, proudly embracing her uni-brow and that little veil of a mustache on her upper lip? (That both were accomplished in their medium is now seldom a point of debate.)

At any rate, it all means, for better and worse, that both have achieved a certain iconic status — in Kahlo’s case, almost literally. Because she painted so many self-portraits, her face is plastered all over through the usual means of mass production. (Read the book! See the movie! Buy the postcards!)  O’Keeffe’s work enjoys the same kind of ubiquity.

If the work is really strong and true, some essence will emerge from the tiniest, schlockiest mass rendering. Herrera, who also co-curated the Walker show, supports mass distribution of Kahlo’s art. “Someone gave me ‘The Little Deer’ as a refrigerator magnet. I was amused by all this, and I think Frida would have loved it,” she said. “For me, it makes the real work flash through my mind; it’s just a little reminder of some connection that does matter.”

Another contextual link the artists share: Though loved and admired by many, how many of those fans have actually seen the real thing?  In Kahlo’s case in particular, not many (including this writer, until recently). It’s not a false distinction. Reproductions are fine as far as they go – and better than nothing – but they can never communicate important physical elements like scale, surface or that elusive, almost mystical “presence.” These two shows offer aficionados – or curious newcomers – a chance to see the real thing.

Brainstorming Frida coast to coast
Showing little-seen work by greatly admired artists was the idea that spawned the Walker’s show. According to Walker associate curator Elizabeth Carpenter, who co-curated the Kahlo show, then-director Kathy Halbreich was brainstorming with Neal Benezra, director of the San Francisco Museum of Modern Art, about that very notion. In another stroke of synchronicity, new Walker director Olga Viso, then at the Hirshhorn in Washington, D.C., was also working with them on the show.

Kahlo’s name popped up immediately. The centennial of Kahlo’s birth was another happy coincidence that gave the Walker a peg for the show. (The show will travel to Philadelphia, then San Francisco after its premiere at the Walker. It’s also the last show at the Walker under Halbreich’s tenure.) 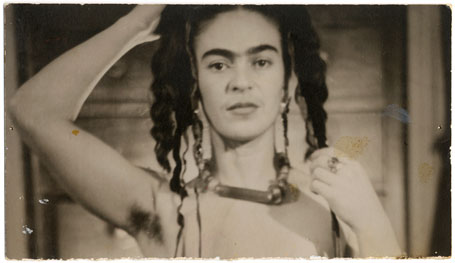 Early on they put together a “wish list” for the show. “We had no overall goal of being comprehensive, we just wanted to get the very finest work we could,” said Carpenter.  In the end luck was with them: “We were able to borrow 46 paintings – exactly the number of paintings we wanted to fill the gallery,” and a substantial portion of Kahlo’s total oeuvre.

Candid photos a coup for Walker
The curator gods smiled on Carpenter again as she sought permission to use the photographs that accompany the show, which include candid snaps of Kahlo, her husband, and their famous circle of friends (among them exiled Russian revolutionary Leon Trotsky).

Through a network of art-world contacts, Carpenter learned of Vicente Wolf, who had just acquired a collection of 400 photos. “And he hadn’t shown most of them. I was practically hyperventilating on the phone when I heard about him,” said Carpenter, laughing. As it turned out, he was very open and excited about the possibility of lending his photographs, which add another dimension to the overall show and, as Carpenter says, a “counter experience” to the paintings.

For Carpenter, however, the art remains the main event. Even she, a well-traveled scholar, was stunned when she saw a recent Kahlo exhibition in Mexico City. “The vivid colors and minute detail” knocked her out, she said. “And the work isn’t even that big; some of it you could hold in your hands, like a book.” This may come as a surprise to many Kahlo-philes (again including this writer, who somehow imagined – from the books, postcards and refrigerator magnets – the actual work to be as physically big as the punch it delivers). But the jewel-like paintings nonetheless retain their clout.

Herrera, reports a similar reaction; hers just came years earlier. The first time she saw a Kahlo show, in Mexico City in the mid-1970s, “I went not expecting much, thinking I can’t imagine anything wonderful would turn up. I was just overwhelmed by the work – the emotional power; it wasn’t just about form and line, it was about her ability to confront us with her situation, which was generally painful.

“In ‘My Birth,’ you see something so utterly frank and direct and yet, the fantasy is quite individual and strange. It hits in you in the solar plexus. She goes so deeply into the personal and comes out the other side.”

Not your standard O’Keeffe show
Like Kahlo, O’Keeffe’s work is all over the place. That popularity is a mixed blessing, says Sue Canterbury at the Minneapolis Institute of Arts. It means O’Keeffe’s work is a popular draw – one reason the institute was interested in the show, which originated at the Norton Museum in Florida – but it also means it can be “overused,” she said.

So what’s the harm in seeing more of O’Keeffe’s work? Isn’t more art-gazing better? Yes, says Canterbury, associate curator of paintings and modern sculpture, but not if it becomes a kind of visual wallpaper. “It immunizes us from taking each image on its own. It creates a certain sort of seen-it-all familiarity, and people don’t look any further than that surface.”
That’s also why the Institute sought to bring the show to Minneapolis, says Canterbury. “It’s a new take on her work,” she said, “pulling back the scrim” of perhaps overly familiar images so viewers can look with fresh eyes.

“Circling Around Abstraction,” as the title implies, examines O’Keeffe’s use of the circle, which has been a persistent, recurrent motif throughout her career, says Canterbury. Like most young artists, O’Keeffe was seeking to integrate all the influences she had absorbed, and early on the circle became a way for her to simplify and organize her work. “She takes off with swirls and the circular motif; she starts with shapes and forms, and by the end of her career, it’s still there, but reversed, particularly with the void”:  the circle becomes a negative space (think of the holes formed by the abstracted bones she paints). “She switches the lens through which she’s looking, and having us look.” 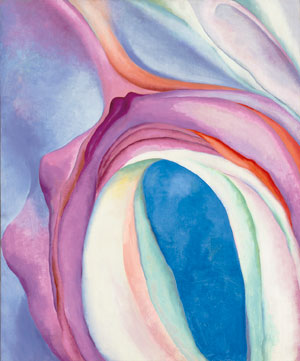 Canterbury thinks the show will also help shed light on O’Keeffe’s durable appeal. Conventional wisdom sees sexual motifs in her work, and it’s not a far-fetched interpretation – advanced among others by Stieglitz, her husband. O’Keeffe, however, resolutely resisted pigeonholing, insisting on her artistic autonomy. “Almost abruptly [after some began interpreting her work in a very Freudian way] O’Keeffe started doing apples,” an image few would be likely to see as anything other than, well, an apple, Canterbury says. O’Keeffe left little room for speculation by choosing plainspoken titles like “Dark Red Apples on a White Plate” instead of earlier titles like “Special.”

The show also offers some of her work in lesser-seen media, including nine watercolors or charcoal drawings. While not a departure for the artist – they were done early in her career – they’re certainly not the standard huge oils people think of as “an O’Keeffe.”

One show at a time
The Kahlo and O’Keeffe shows are small enough to see in the same day without risking sore feet or undue “museum fatigue.” But separate trips are advisable. Moving from O’Keeffe’s austere, deceptively simple abstractions to Kahlo’s mesmerizing depictions of open wounds (physical and psychic, take your pick) demands a lot of aesthetic gear-switching, even for the most rugged art adventurers; reversing the trajectory would be just as challenging.

Judy Arginteanu, a former editor and writer for the Star Tribune and Pioneer Press, writes about visual arts and design for MinnPost.

Listen to the Walker’s opening day lecture by Hayden Herrera on Frida Kahlo. (Note that this is a large file.)