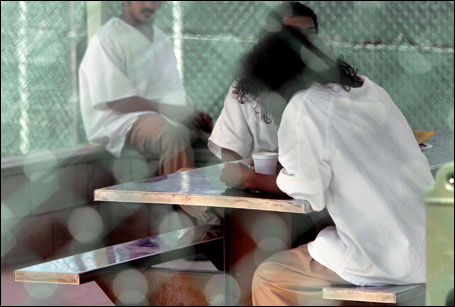 REUTERS/Brennan Linsley
In this photo reviewed by U.S. military officials, detainees, whose names, nationalities, and facial identifications are not permitted, sit within the grounds of Camp Delta 4 military-run prison, at the Guantanamo Bay U.S. Naval Base, Cuba June 27, 2006.

The hundreds of foreign men who have been locked up for more than five years at Guantanamo Bay are shadow figures to most Americans, human abstractions for the conflicts that grip the world in the age of terrorism.

But Minneapolis attorneys have fleshed out a fair amount of personal information about their client, Ahcene Zemiri, who also is identified in government records as Hassan Zumiri.

Zemiri is a 40-year-old Algerian man. He grew up in Algiers, the youngest of many children, graduated from ninth grade and completed compulsory military service before moving to France in the 1980s to join his brother’s export business while also trading drugs, said James Dorsey, one of the Minneapolis attorneys representing Zemiri.

In 1994, he moved to Montreal, allegedly on a forged passport, where he met and married Karina Dereshteanu, who is Romanian. After Canadian authorities started cracking down on suspected illegal immigrants, they moved to Afghanistan in June 2001. They were living in Jalalabad on Sept. 11, 2001, when terrorists attacked the United States. The swift response from the U.S. and its allies was a mighty air and ground campaign in Afghanistan where Al Qaeda and its sympathizers operated.

Getting Karina out of Afghanistan was relatively simple. But an Arab man on the run was a certain target. So they split up. She returned to Canada where she gave birth to their son, Karim Zemiri, in June 2002.

Hiding in caves
Meanwhile, Zemiri joined some 200 other Arab men who were trying to sneak out of Afghanistan. They hid in caves near the country’s northern border in the rugged mountain region called Tora Bora. One night in November 2001, Zemiri and 60 others tried to slip into Pakistan.

U.S. war planes spotted them and attacked. Within minutes all of the men were dead or wounded, Dorsey said.

Zemiri survived, but his arm was broken and he had shrapnel wounds.

“He found his way to a village the next morning and they told him: ‘It’s OK. We will take care of you. We are Taliban,’ ” Dorsey said.

But Zemiri’s hosts turned him in, and by spring 2002, he was in Guantanamo.

“The question from the United States standpoint is what was he doing in Afghanistan to begin with,” Dorsey said.

A Defense Department summary of proceedings at Guantanamo indicates that Zemiri said he went there because he wanted to live in a Muslim country and “be left alone.”

Friends with Millennium bomber
At Guantanamo, Zemiri has been subjected to sleep deprivation, extreme heat and cold. He has been blasted with loud music and strobe lights and shackled on a short chain for long stretches of time, his lawyers said. At one point he was slimed with what he was told was menstrual blood and then returned to his cell where the water had been turned off so he couldn’t wash.

Dorsey invites no sympathy for Zemiri on the basis of character: “Look, our guy is a petty thief and a drug dealer. He’s got a vicious temper, which we have seen. His view toward his wife is not particularly enlightened all of the time.”

Zemiri has refused to speak at annual hearings conducted for each detainee. But he has talked to interrogators, and his story hasn’t changed, Dorsey said.

Initially, U.S. officials alleged that Zemiri had provided financing and equipment to a friend — Ahmed Ressam, who came to be known as the Millennium bomber. Ressam was convicted of plotting to blow up the Los Angeles airport in 1999. After cooperating with authorities in cases against other suspects, Ressam is serving a reduced sentence of 22 years in a federal prison.

It is true that Zemiri and Ressam were friends in Canada, Dorsey said.

“They played soccer together,” Dorsey said. “Ressam was Algerian, too. He was living in Montreal. Ressam went to the wedding of Karina and Ahcene.”

After Ressam’s arrest, authorities investigated and wiretapped his associates in Canada. Some were arrested. Some fled. But Zemiri apparently passed the scrutiny at the time.

In 2006, Ressam sent a letter from prison to the federal judge in his case saying that Zemiri knew nothing about the bombing plot.

“It is true that I have borrowed some money and a camera from him, but this was only a personal loan between him and me,” Ressam wrote. “It has nothing to do with my case.”

Sketchy records the government has released show that other evidence against Zemiri includes about 40 allegations. Some are vague: that he lived close to the leader of a militant Islamic group in Algiers, for example. Some are specific: that he left France with a forged passport to enter Canada in 1994.

Dorsey said he has seen no evidence that Zemiri engaged in political activities or attended the training camps where many militant Islamists learned terrorist tactics.

Zemiri insisted in an affidavit in 2005 that he poses no threat to anyone: “I like the United States. I think Americans are good people. I want to spend the rest of my life in peace with my family.”

Related: Is this man a terrorist? His Minneapolis lawyers focus on another question

Lawyers learning more and more about their client