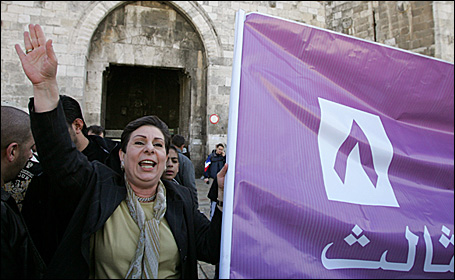 REUTERS/Oleg Popov
Palestinian leader and peace negotiator Hanan Ashrawi campaigning in front of the Damascus gate in Jerusalem’s Old City last year. Looking back, Ashrawi says, “I started in peacemaking as an activist in hot pants and now I’m a grandmother in suits.”

The conundrum of Tuesday’s Israeli-Palestinian Peace Conference in Annapolis, Md., is that the risks of failure are immense and the chances for success are small. Yet the key players are moving ahead briskly.

Joharah Baker, writing for Miftah, the Palestinian Initiative for the Promotion of Global Dialogue and Democracy, says: “Everyone…agrees that the autumn summit under American auspices, is a risk, a political wager, that could result either in a breakthrough of sorts or disastrous repercussions for the Palestinians in particular.”

Andn Akiva Eldar writing in the Israeli paper Haaretz warns: “Initiating diplomatic negotiations, like going to war, is not child’s play. With a nod to Carl von Clausewitz’s observation that war is a continuation of diplomacy by other means, one could say that the failure of diplomacy is liable to lead to other forms of war.”

Hands-off approach
Still, President Bush will host the conference and will be joined by Israeli Prime Minister Ehud Olmert and Palestinian president Mahmoud Abbas at the gathering, which, according to the State Department, will involve more than 40 countries.

This comes after nearly seven years of a hands-off approach by the Bush administration to peacemaking between the Israelis and Palestinians. Now Secretary of State Condoleezza Rice and the leaders of the two sides, in speeches, news conferences and meetings, are trying to say all the right things.

Olmert says Israel is willing to discuss all the basic questions about Palestinian statehood at Annapolis and hopes that a Palestinian state alongside Israel could be established before Bush leaves office in early 2009.

For his part, Abbas says he, too, wants to have a peace deal and the creation of a Palestinian state before Bush leaves office. In fact, some Palestinian officials have said that Abbas wants to have a final deal within six months after the Annapolis conference, a timetable that makes Israeli officials nervous.

And like all the previous efforts at peace during the 60-year conflict between these two peoples, knowing what the final resolution might look like does not mean it is easy to achieve. Majorities on both sides say they want peace and agree on general principles. The thorny details include the so-called final status issues: the borders of a Palestinian state, the status of Jerusalem and its holy sites, the status of Israeli West Bank settlements and the fate of Palestinian refugees.

Politically weak leaders
For the people of the region who have lived through generations of conflict and violence, the conference is more personal.

“I started in peacemaking as an activist in hot pants and now I’m a grandmother in suits,” Palestinian leader and peace negotiator Hanan Ashrawi said at a recent conference at Macalester College in St. Paul. “Palestinians don’t have a choice but to take risks in peacemaking…We believe in humanity and we believe both peoples have a right to live in peace.”

Israeli Yossi Beilin, a longtime Israeli peace negotiator and legislator who worked on the Oslo accords in 1992, told the same conference that the irony of the Annapolis conference is that it involves three leaders who are politically weak (Olmert, Abbas and Bush) “who have almost nothing to lose. They can only win if they make peace, but if they fail, they will be responsible for the eruption of a new tide of violence and we don’t know how to control violence.”