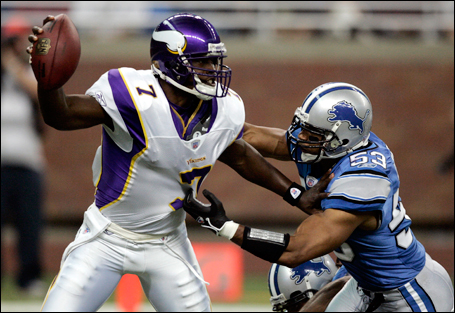 As if a last-second field goal eked over the crossbars, the Vikings sold the last of the remaining tickets for Sunday’s Detroit Lions game to corporate sponsors this morning to once more avoid their first local TV blackout in a decade.

If and when that blackout ultimately comes — and if the team loses Sunday, there surely will be one this season — it will be a troublesome moment for the team’s front office and its nascent stadium effort.

Without TV, the game becomes a private affair, not a community event. Without TV, the team belongs to those 63,000 in the Metrodome who can afford tickets, not to the million-plus Minnesotans who watch games on the tube as a weekly social function.

Declining season ticket sales and painful single game sales through this season implies dipping interest in the team. If that’s the case, seeking broad-based public money for a new stadium — as the team and Metropolitan Sports Facilities Commission will — becomes more difficult.

Vikings popularity as strong as ever
But, actually, it’s mind-blowing how popular the team is statewide, in absolute and relative terms. Sunday’s blackout is not about Vikings’ sagging popularity.

TV ratings and share have been up this season over last, Steve Lacroix, Vikings sales and marketing vice president, told me recently. Among the 32 NFL markets, the Vikings ranked eighth, with about 63 percent of all TVs being watched on a Sunday turned to Vikings’ games. By comparison, when the NHL Wild have a great night on TV, they get 8 percent of TV viewers.

For a typical Vikings game, more than 520,000 homes, or about 25 percent of all the households in the state, tune in.

What’s happened here, Lacroix told me, is that “the hand that feeds us” — the seemingly guaranteed TV show every Sunday and the approximate $100 million in network rights fees to the team — has created a culture of living-room convenience.

Here’s the option: Pay $50 for a ticket, sit in the Dome’s nosebleed seats, hold in any bathroom visits because the lines are too long, pay too much for a warm beer, get puked on by a rowdy fan next to you and plug your ears with a napkin to avoid the blaring hip-hop…

Or, click the zapper, open the chips, check your emails and intermittently watch the game… for, more or less, free.

“People aren’t tuning out at all,” Lacroix said. “But it’s the convenience of the TV viewer with high-definition TV at home versus sitting in the upper reaches of an outdated facility for the NFL experience.”

Oops. The need for a new stadium barged into the conversation. Let’s not go there right now. But let’s stipulate that eking out another corporate buyout this week is not an honest reflection of the affection for this franchise in this market. It’s more a product of, for some, ticket pricing, busy families, an underachieving team and this sense of TV entitlement.

In-stadium viewing like TV show, too
Fact is, teams in all sports have trained their in-stadium fans to watch the live game as if it were a TV show.

Which leads to Richard Ford’s brilliant essay in the New York Times recently.

Ford is the Pulitzer Prize-winning novelist of such gems as “The Sportswriter” and “Independence Day.”

Read it all, but let me return to what Lacroix told me about the “hand that feeds” the NFL machine. That hand is about screens, commercials and noise of all sorts. It has served to adversely affect all professional sports’ game-day experiences. Teams need to realize that.

“Do kids now think highlights are all the game’s about?” Ford asked in his Times’ essay. “Do they feel comforted — if they ever get taken to the [ball]park at all — that there are Lunesta commercials flashed up on the JumboTron between innings, and that for reasons of (I guess) cash flow and whopper players’ salaries, the people in charge of sports in America have decided that live games need to look as much like TV as possible? … The truth is I love N.B.A. basketball, but I hate going to an N.B.A. game — because of all the dancing girls and the acrobats and the P.A. guy’s tumescent, Michael Buffer-ish voice wounding my ears while some citizen in a pink mascot suit does flying dunks off a trampoline every time the timeout whistle blows. (Don’t we all hate mascots?)”

Yes, but larger than that issue, the Steve Lacroixes of the world have to figure out a way to balance the power of TV with the genuine value of being in the stadium, whatever that stadium may be.