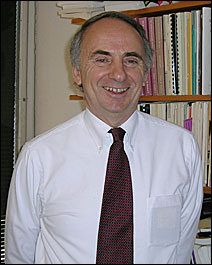 Tom Stinson is a man thorough in his research, nonpartisan in his behavior and cautious in his pronouncements, which is how he has been able to serve effectively as the Minnesota State Economist for the past 20 years under governors from three different political parties.

After a half-century of robust prosperity, Minnesota’s economy has not kept up with the growth rate of the U.S. economy as a whole in recent years. In a careful but candid conversation at his office in St. Paul last week, Stinson (who is also an associate professor in the Department of Applied Economics at the University of Minnesota) talked about the long-term challenges facing the state as we seek to maintain our reputation as a regional economic engine for the upper Midwest.

He capped this sobering portrait of choices we must make and the stakes involved in those decisions by allowing the “R word” to escape his lips when addressing the potential short-term impact of the recent housing crisis and credit crunch currently raising havoc on Wall Street.

MinnPost: Give us some context for the recent gloomy news about the Minnesota economy. Is it something we should be concerned about?

MP: There has been a lot of debate about whether this is because of a lack of investment in government or a refusal to pay taxes, or, on the other side, too much taxation hurting the business climate. How much of a factor are these things and how long does it take before these decisions are reflected in economic performance?

TS: There is not much you can do in the short run to stimulate a large economy like the State of Minnesota’s. Typically it takes awhile for a cumulative impact to be noticeable. But one of the large changes that may have occurred is that the production of defense material has become more important in the U.S. economy than it was five or 10 years ago. And that is not an important sector in Minnesota. So to the extent that the growth in the U.S. economy is coming from defense production, Minnesota is bound to grow more slowly.

Another place where we have to be concerned is our investment in new technology. We are not talking about just the state government’s investment, but the broad range of investments in research and development. The identification of new products and new processes and new ways of doing things has slumped significantly in Minnesota compared to what it was 20 or 30 years ago. It could be that part of our underperformance economically is that we just haven’t been investing enough in r&d compared to the rest of the country.

MP: You and State Demographer Tom Gillaspy have made presentations around the state recently to highlight some of the longer-term challenges facing Minnesota. What is the message you are trying to get out?

TS: Everybody knows the Minnesota workforce is getting older with the aging of the baby boomers. We are going to have an increasing number of people approaching retirement age very soon. The part of the demographic message that isn’t as well known is that the number of people coming into the workforce is actually declining over the next 10 or 15 years. That stress for the labor market is a national phenomenon, and means there will be more competition for new hires.

That creates a new “3 R’s” for business over the next decade or two. Recruitment, because they are going to have to be able to find new workers. Retention, not only to retain good workers, but keep people approaching retirement age for another year or two longer and have them help train in the people replacing them. And Retraining. Here there are a couple of issues. One of the state’s competitive advantages has been the quality of the workforce, so we have to be sure we are protecting our brand reputation by having a well-educated, highly productive workforce going out into the future. The second piece is that the technology is changing so quickly that if you aren’t careful people in the existing workforce are going to be out of date in terms of their skill sets. So we need to be sure that the people already working have those updated skills as well.

One of the challenges that Minnesota is going to face in the next decade or two is what appears to be right now a substantial achievement gap in high school graduation rates. In the 1960s, less than 50 percent of the people of working age had a high school degree. Now more than 91 percent do. Unfortunately, if you break that down and look at it by racial and ethnic composition, you see that the fastest growing part of our working-age population — young Hispanics and Afro-Americans, young American Indians and young Asians — don’t have graduation rates that are anywhere near that level. And in an increasingly competitive global economy, people that don’t have a high school degree are going to be forced to compete with people in other countries for employment.

MP: Does post-secondary education factor into this retraining as well?

TS: I think we have to seriously think about tuition policy at our four-year institutions, as well as graduate schools. When the pool gets smaller, it becomes more difficult for local firms to recruit high-quality engineers and accountants and staff people. It certainly is easier to recruit someone off the campus in Minnesota than off the beach in California. So to the extent that we need to be competitive, we need to think about how we keep Minnesota-raised students in Minnesota and how do we draw students from other states.

Another issue here [is] the graphic changes in the structure of employment. We are going to need to think about how we facilitate individuals who want to make career changes that require more than just a little updated training to make those transitions.

MP: Given our finite resources, how much do we have to prioritize what we do, in both the public and private sector?

TS: Minnesota’s economic record over the last half-century is one most states envy. The reason that occurred was because far-sighted public and private sector leaders figured out they were going to invest in the education of the baby boom generation. Now it seems like an obvious decision to have made, but if it was, other states would have done it too and we wouldn’t have done as well.

Now we are faced with another challenge — what do we do now that the baby boomers are retiring? And here, the answers aren’t even as clear even as they were back in the 1950s. You’ve got the problem of a changing labor force and also global competition. You’ve got rapidly improving technology.

Whether we make those decisions by making explicit changes in what we are doing or implicitly by leaving things as they are, those decisions are going to have a major impact on our future economic output. Everybody has their own opinion as to what is important and what the balance should be. But there needs to be a public discussion, not on the question of taxes versus government spending, but rather on how we distribute the resources we have in a way that best enhances the future as well as the present.

MP: There has been growing concern over the current turbulence in the economy. Is this just a wrinkle or do you think we might be at the precipice of something much more substantial and harrowing?

TS: Things are changing rapidly. By the time this story is printed, they may have changed to be different than they are now. Honestly, if I know the impact of these changes I would be rich and on the beach somewhere.

But whatever happens with the current economy, it really doesn’t make a difference about the longer-term decisions. The U.S. economy and the Minnesota economy are going to struggle during 2008 and the struggles may be more significant than anybody thinks right now. But one of the things we know about recessions is that they come to an end. And the problems and challenges we’ve been talking about are going to be there regardless of whether we have 2 percent growth, or 1 percent growth, or no growth in 2008.

It doesn’t change the demographics and the competitive nature of the global economy.

Britt Robson, formerly a staff writer and senior editor at City Pages, covers the state Capitol and politics. He can be reached at brobson [at] minnpost [dot] com.