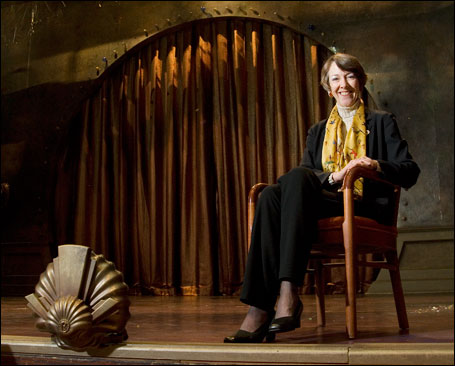 Photo by Bill Kelley
“It’s as though I’ve come to the banquet at dessert and didn’t have to peel potatoes,” says new CEO Patricia Mitchell about finalizing a power-sharing pact.

When Patricia Mitchell took over in August as chief executive officer of St. Paul’s Ordway Center for the Performing Arts, she inherited a mission that she could buy into — with one exception.

According to the mission statement, “Ordway Center is a catalyst for the artistic vitality of our community by hosting, presenting and creating performing arts and educational programs that engage artists and enrich diverse audiences.”

Mitchell would like to change one word: catalyst. She recalls enough chemistry to know that a catalyst helps to create the conditions for a chemical reaction but it is not the main cause and it is not an ingredient in the final mix. To Mitchell, it sounds too much like another chemistry term: inert.

It does not sound at all like “leadership,” one of the first words Mitchell utters when asked to list the challenges she faces at the Ordway. In previous leadership positions, Mitchell headed the San Francisco Opera, the Los Angeles Opera and, most recently, the Literacy Network of Greater Los Angeles. She was also chief operating officer of the Los Angeles Philharmonic. In the Twin Cities, Mitchell plans to demonstrate the Ordway’s leadership through the programming it puts on stage, while maintaining its role as a convener and a collaborator with other arts organizations.

So what’s new? The Ordway already does all of these things.

Mitchell’s leadership aim takes on more significance in the context of an agreement intended to break a logjam that’s almost as old as the Ordway itself. As part of the deal, announced last month, the Ordway has agreed to a power-sharing arrangement with its three main tenants, the St. Paul Chamber Orchestra, the Minnesota Opera and the Schubert Club. They formed a separately incorporated body called the Arts Partnership. Under the partnership, leaders of the Ordway and each Resident Arts Organization (RAO) have already begun figuring out how to share the facility, working on issues such as scheduling, rent, physical improvements and even joint fundraising.

The sharing challenge
Absent this partnership, managing the often-contentious relationship between the Ordway and its RAOs would have been Job One for Patricia Mitchell. All of the parties must take turns using the Ordway’s main stage.

“If this agreement is truly in place it’s a great achievement because the most difficult thing is balancing the needs of the St. Paul Chamber Orchestra, the Minnesota Opera and the Schubert Club against the needs of the Ordway itself,” says Roy Close, who covered the Ordway from its opening in 1985 to 1992 as a writer for the St. Paul Pioneer Press. He is now a director for the Minneapolis nonprofit Artspace, a real estate developer for the arts. Close worked for the Ordway as a grant writer in 1998-99.

“When I was there, sharing the facility was a sore spot all the time. All of the parties were vexed and all had good reasons for that, but all argued from self-interest,” says Close.

The arguments became especially heated in the late 1980s and early 1990s as the Ordway discovered touring Broadway productions could generate much-needed revenue. In 1990, the Ordway showed it was willing to take away dates from resident groups to make way for potentially lucrative musicals.

“These were events that really rocked the boat,” recalls Minnesota Opera President Kevin Smith. In addition to problems for his own company, he remembers the SPCO had to reschedule its 1995 season-opening concerts so the Ordway could bring in the musical “Show Boat.”

“The SPCO suffered an audience loss it never recovered from,” says Smith.

If the new Arts Partnership works, that kind of thing will not happen anymore. The Ordway and the RAOs have agreed on a framework for divvying up the available time and each party owns its dates.

The 2 1/2-year effort that led to the Arts Partnership is not the first attempt to solve the sharing problem. But this time is different, says SPCO President Bruce Coppock, because St. Paul business leaders got involved and were unwilling to accept failure.

Does that mean Coppock and his colleagues had their feet held to the fire?

“Let’s just say it was compelling community leadership,” answers Coppock. “We all realized there was so much to be gained by solving the problem and so much to be lost by not solving it. It was a powerful combination.”

“I’ve never seen it like this,” Smith says of the level of cooperation he has observed so far. “I’m confident because we’re already implementing what we agreed on.”

Coppock adds, “I’m thrilled about it.” The agreement gives the SPCO the access it needs (16 weeks a season), a predictable schedule and a reasonable rent structure, he says.

Had she not come on board late in the process, Mitchell admits she might have asked for a few changes but on the whole she finds the resolution “reasonable and reasoned.” She fully realizes she has been spared from a major chore: “It’s as though I’ve come to the banquet at dessert and didn’t have to peel potatoes,” she says.

“It’s really very clarifying for all concerned,” Coppock says. “For the Ordway, the partnership is at the heart of a “Who are we?’ question it’s faced for the past 20 years: Are the RAOs a burden or are they part of the foundation?”

While the agreement may lend clarity to that question, it seems to cloud another aspect of the Ordway’s identity problem. 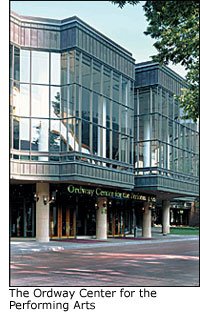 The identity challenge
When it opened on Jan. 1, 1985, the building bore the name Ordway Music Theatre. Many saw it primarily as the home of the SPCO. To recognize the Ordway’s expanding role as a presenter, the name changed in 2000 to Ordway Center for the Performing Arts.

“Some members of the classical community may have looked at the shift as a conflict with the Ordway’s original intent,” says Smith.

“When I was there,” says Close, “it had to try to be a lot of things to a lot of different constituencies. The challenge is to get it so it appears to be one thing to all of its constituencies.” Close does not think the Ordway needs to do only one thing, but it does need a better-defined mission.

Mitchell has heard these claims. “People say they’re not clear about what the Ordway is supposed to be. Well, it’s a performing arts center; that seems clear to me. But the perception may go back to our not making our message clear to the community,” she says. The Ordway is conducting research on its public identity, she adds, and expects preliminary results in January.

Mitchell acknowledges that because of the direction it has taken as a presenter, “the Ordway has become identified as a place where you come to see touring musicals.” That concerns her because it “confuses the philanthropic message.”

The money challenge
Smith knows why Mitchell expresses that concern. The Ordway’s endowment has never provided a comfortable financial cushion. “Without a large endowment, contributed support is key,” he says.

The Ordway reports that its endowment now stands at $13.9 million. Board policy allows the center each year to draw 5 percent of the endowment’s market value for operating cash, provided the value does not dip below $13.5 million. The last time that happened was 2002.

According to what Mitchell cites as conventional wisdom, the endowment should be three or four times larger than the operating budget, which she places at $17.3 million. The Ordway has also faced deficits throughout its history. Internal Revenue Service documents reveal that it finished in the red three out of the past five years. (The Ordway’s own accounting, which handles depreciation differently, shows a deficit only in 2002.) While direct public support in those five years has risen from $1.7 million to $5.3 million, program service revenue including ticket sales has dropped from $10.5 million to $8.2 million.

Assessing the Ordway’s financial health in a June 2005 editorial, the Pioneer Press described the institution as “the sick man of the St. Paul arts community.”

“Every arts organization has had peaks and valleys,” responds Mitchell. “Broadway hits come and go. Corporate support comes and goes. We need to strengthen our reliable contributed income base. To do that, we need to demonstrate that we merit support, that individuals perceive us to be hugely important to the city.”

On that point, Mitchell will get no argument from St. Paul Mayor Chris Coleman. At the announcement of the Arts Partnership, Coleman relayed a message he received from the business leaders in the Capital City Partnership. Mitchell quotes him as saying, “The way the Ordway goes, so goes downtown St. Paul.”

This is why Mitchell intends the Ordway to embrace a leadership role. To be a community cultural leader, Mitchell says, the Ordway needs to diversify its programming.

The artistic challenge
At three months into her tenure, it is too soon for Mitchell to specify what greater diversity will look like at the Ordway. Using current activity as a possible indicator of things to come, she refers to Planet Ordway, which features multi-disciplinary performances by international artists, and the center’s education program, which now includes special student performances, residencies and workshops.

Because the dates promised to the RAOs are now inviolable, the calendar is tight. “I can’t schedule a toothpick,” says Mitchell. So new Ordway programming will “spill out into the community” as it did in September with the “Concrete and Grass” Festival in Mears Park.

Broadway musicals do not seem to loom large in Mitchell’s vision of the future, but if her reasons are artistic she doesn’t say so. Musicals are not the “economic answer” that they were 15 years ago with “Les Miserables” and “Phantom of the Opera,” she observes. On her watch, the Ordway will stage what she describes as “the right balance of presented and produced work. It will depend on what’s available and what we’re confident in.”

“Change can be challenging,” Mitchell says, “but we are positioned to be at the leading edge, taking a positive direction.”

The outlook
In 2010, the Ordway will celebrate its 25th anniversary. If Mitchell has accomplished what she wants to do in her first 2 1/2 years, what kind of Ordway will we see?

“I get the impression she’s a good hire,” says Close. “She’s looking at the problems in the right way. The Ordway has not always had fully engaged leaders, leaders who’ve had the hearts and minds of their staff. She’s in a good position.

“The Ordway is one of my favorite places in the Twin Cities,” Close adds. “It’s a magnificent public space — welcoming, inviting and exciting. Every time I walk through the doors I feel happy to be there. If she can get it so it feels that way to everyone, she’ll be very successful.”

Don Lee, who spent 30 years in public radio, writes about classical music, opera and choral music. He can be reached at dlee[at]minnpost[dot]com.

Ordway’s CEO seeks right chemistry on and off stage