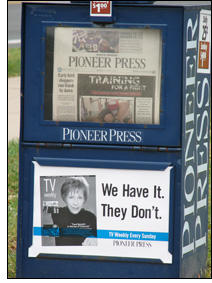 It’s a sad fact that the quality of journalism isn’t always the deciding factor in garnering new subscribers or, for that matter, page views. During 20 years as the Star Tribune’s St. Paul columnist, I ran into dozens, perhaps hundreds, of people who’d say that they loved what the Strib was doing in St. Paul, but they still needed the Pioneer Press.

Why? The obits. Or the movie ads. Or high school sports.

My grandma, bless her soul, needed to work the Word Find puzzle every day. It was in the Pioneer Press (which she called the Dispatch, even years after the afternoon paper folded). My gift subscriptions of Star Tribunes went unread, stacked inside her front door.

Peripherals are such an important part of the “news” experience for many people that it’s no surprise that the Pioneer Press had responded aggressively to the Star Tribune’s decision to end distribution of its Sunday TV Week tabloid.

On Nov. 4, the Star Tribune stopped distributing the magazine, which plotted out the week’s TV fare, with grids for broadcast and cable shows, brief movie descriptions and fluff features about upcoming shows.

It had to be done, newspaper leaders said in a staff memo.

TV viewers’ habits changing
“Readers helped guide this decision through their behavior changes. There has been a dramatic shift in how people watch television programming and where they get information about that programming. Many readers tell us they no longer use TV Week, the TV magazine with an entire week of listings, because TV listings are widely available on screen, online and in the daily newspaper. These daily listings are more current because they can reflect the latest schedule changes.

“And, as reader interest in TV Week has waned, so has advertiser support. For those Star Tribune readers who want to continue to receive a weekly TV magazine, a special offer for TV Guide is available. The offer combines a reduced rate from the publishers of the TV Guide with an additional eight weeks free from the Star Tribune. When combined, this offer is 80 percent off the newsstand price.”

The paper couldn’t justify the magazine’s cost — lower readership of the TV book and the corresponding drop in its ad revenue meant losses of more than $1 million a year — in a time of lower circulation and dropping advertising revenues for the overall paper. Cutting TV Week was reportedly one of the cost-saving moves suggested by management when the paper was sold late last year by McClatchy to Avista.

Pioneer Press marketers go to work
But when it finally happened this month, the Pioneer Press almost immediately popped a new marketing campaign: “We Have It. They Don’t.”

“We want to remind readers that we have some content that the Star Tribune doesn’t,” said Pioneer Press Editor Thom Fladung.

“In this business, we all love doing the big, sexy stories, sending correspondents to Iraq and all those great journalistic efforts, but the fact is that there are basic levels of information that readers embrace,” he said. “We do know that fewer and fewer people are using the TV book, but there still are some who do.”

Fladung said there are “no plans that I know of” for the Pioneer to discontinue its TV Weekly.

The Star Tribune’s decision came at some cost. The paper fielded hundreds of calls from angry readers and more than 2,000 subscribers canceled, according to a report from the newspaper. That’s only about one-half of 1 percent of Sunday subscribers. About 250 of those have since returned to the fold, though. And the paper said thousands more took advantage of the discount offer with the national TV Guide magazine.