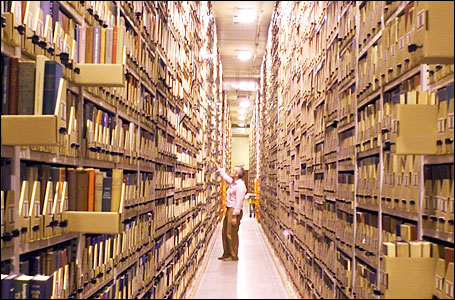 Poetry is not generally regarded as a viable career, but if you stick with it — and save every scrap, scribble and rejection letter — someday, the academic world might grant you a measure of the riches the book-buying public has given to novelists Dan Brown (“The DaVinci Code” author earned $88 million in 2006 alone) or Danielle Steele (her net worth is estimated at between $1.2 billion and $1.6 billion).

It worked for Robert Bly. Last year the 80-year-old local poet sold the bulk of his literary archives, including correspondence, original drafts and manuscripts, and journals, to the University of Minnesota for $775,000. Not a bad reward for being a pack rat.

The business of buying writers’ archives, which can include everything from first drafts of novels and correspondence to check stubs and desk trinkets, has become increasingly competitive, and Minnesota institutions are in the game.

Occasionally such papers, if they weren’t incinerated during a bout of writer’s block or embarrassment, are “gifted” to alma maters. Until the early 1970s, writers could even get a tax write-off for doing so. Increasingly, however, institutions compete at auction or negotiate through brokers to win the right to store the recyclable byproduct of the writing life, whether it’s a few notebooks or a burgeoning fire hazard (Bly’s archive consists of 80,000 pieces of paper.). Literary archives are so potentially lucrative for noteworthy writers that even younger writers are saving papers — or printing them out — in hopes of an end-of-career bonus check.

In the past five years, the Harry Ransom Center at the University of Texas in Austin paid $2.5 million for Norman Mailer’s archives, and $5 million for the Watergate papers of Washington Post reporters Bob Woodward and Carl Bernstein. Meanwhile, the National Library of Ireland paid $11.7 million for several previously unknown James Joyce manuscripts — desperate to keep them from going to America, as so many British archives have done. For instance, guess where the world’s largest collection of Sherlock Holmes-related material resides? It’s at the University of Minnesota.

‘Numbers fall out of the sky’
Libraries, museums and even private collectors vie to become the climate-controlled keepers of all manner of literary souvenirs. On eBay recently, a letter written by Gertrude Stein was offered at the Buy It Now price of $900, and an original manuscript of Samuel Taylor Coleridge’s poetry was offered for $25,000.

But typically, librarians aren’t trolling the Internet for collectibles. Instead, they court writers directly, query descendents of dead writers and field invitations from antiquarian booksellers who have purchased original materials as part of a larger estate. The various players engage in a complex and sometimes very secretive dance in which seller and librarian contemplate the desirability of paper ephemera, complete with silverfish.

Robert Rulon-Miller, an antiquarian bookseller working from a book-lined mansion on Summit Avenue in St. Paul, has appraised the archives of local writers Carol Bly and Michael Dennis Browne, and the publisher Milkweed Editions. He says placing a value on these papers is an inexact science.

“I can’t tell you how I come up with a price, and it’s not because there’s some secret method. It’s because I just don’t know. Numbers fall out of the sky. That’s all I can tell you,” he said. “You look at the stuff, get a feel for what’s there, put it into the pot and it’s almost like magic.”

Appraisers like Rulon-Miller and James Laurie, whose downtown Minneapolis store is filled with rare maps, engravings and first editions, conduct their business with a tremendous sense of privacy. After all, they get invited into writers’ homes to peruse papers that include old love letters, private journals, and, perhaps most embarrassing of all, rejected manuscripts. 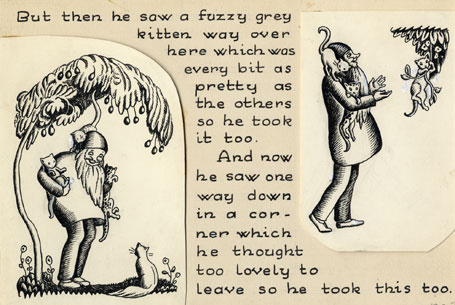 Courtesy of University of Minnesota Libraries
An original illustration study by Wanda Gag from her children’s book, “Millions of Cats.” The study is part of the Kerlan Collection.

Laurie says he has a “very significant” manuscript in his possession, and he’d like it to end up in an institution, if he can find one willing to buy it. He says it’s important that such items bear a price tag, rather than become donations.

“[Eighteenth-century English writer] Samuel Johnson said not to give people books; have them buy them, because they’ll appreciate them more. Any institution or individual will accept a gift for free. But when they buy papers or books, they value it more — or at least they know what it’s worth to them,” said Laurie.

Laurie confesses some skepticism about some of the literary archives that have recently fetched dazzling dollar amounts for living writers.

He has heard rumors about writers manufacturing “archival material” expressly to sell to universities, hand-writing materials and even reprinting items to beef up a collection. He also questions the merit of some of the writers the U of M has bought archives from, thinking a couple “weren’t very good.” On the other hand, like all devoted booksellers, Laurie would like to see writers rewarded. “Is this how we’re supposed to honor and take care of writers at the end of their lives? Maybe it is.”

At home in Minnesota
Of course, the true value of literary archives is in the eyes of the scholar who visits them, and locally, researchers have a wonderland of papers to get lost in — by special permission of course. The University of Minnesota’s Elmer L. Anderson library, which was completed in 2000 and built expressly for the purpose of archiving literary collections, houses the papers of John Berryman and James Wright; correspondence by poet Countee Cullen; the original manuscript and production papers of Madeleine L’Engle’s “The Other Side of the Sun”; 11 boxes of Henry Miller’s legal and business papers, and 89 boxes of Carol Bly’s writings.

The Kerlan Collection, the U’s internationally significant vault of children’s literature, contains original manuscripts and illustrations of Arnold Lobel’s “Frog and Toad are Friends,” Margaret Wise Brown’s “Goodnight Moon,” and Wanda Gag’s “Millions of Cats,” among many others. The illustrations can be particularly desirable; New Ulm artist Gag’s work now sells for thousands of dollars.

And perhaps Samuel Johnson was wrong: Curator Karen Hoyle says most pieces in the Kerlan collection were gifts. “[We] invite authors and artists whose work is highly regarded in the field, and apt to be studied or exhibited, to donate,” she says. And they do.

Similarly, smaller colleges don’t have the budget to buy literary archives, but they do turn out successful — and hopefully generous — alumni.

Macalester College’s alumni have donated Christmas cards from Robert Frost and letters from Sinclair Lewis and Willa Cather to the college’s DeWitt Wallace Library, and the school hopes for something more substantial down the road, such as papers from alumni Tim O’Brien (“Going After Cacciato”) or Charles Baxter (“The Feast of Love”). “This really is just a wish list,” admits Macalester archivist and reference librarian Ellen Holt-Werle. “It may be a little more realistic to think about getting faculty papers [such as those of Native American poet and novelist Diane Glancy or Chinese poet Wang Ping], as we don’t have the resources to acquire large literary archives.” 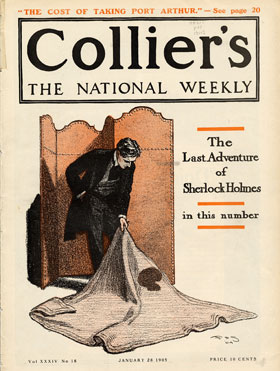 Courtesy of University of Minnesota Libraries
This cover illustration from a 1905 issue of “Collier’s” magazine was done by Frederic Dorr Steele, the American illustrator of the Sherlock Holmes adventures.

The Minnesota Historical Society also collects literary archives and artifacts, when there is local significance. “Last year, a 16-page booklet of Bob Dylan’s poems came on the market. Oh, it just breaks my heart,” said MHS acquisition librarian Patrick Coleman, who unsuccessfully bid on the item at a Christie’s auction in New York. “All the poems were Dylan at the U of M. He was writing about Washington Avenue, girlfriends, places around the U, and it was such a Minnesota piece, and it really belonged here in the state. It ended up going to a private collector in Germany.” It sold for $78,000, a small fortune for the MHS.

Both the U and the MHS solicit donations from “angels” when trying to compete for valuable archives. “We were able to raise about 75 percent of the funds needed to purchase the Bly archive (the rest came from University president Robert Bruininks and an endowment). It took several months and a lot of hard work,” said Kris Kiesling, director of Archives and Special Collections.

Kiesling came to the U after 16 years at the Harry Ransom Center in Texas, which has famously raised the level of competition with its extraordinary winning bids, and her hire in 2006 may mean the U is getting ready to fill its new archives building with increasingly high-profile collections.

Anyone may view the materials in the archives and special collections, after stating their purpose and presenting an ID to a librarian. And of course, nothing can be checked out. But in a quiet reading room, for a little while, admirers can touch the very paper that was scribbled, typed, cried or spilled coffee upon by the writer.

Kiesling says federal tax law prohibits an author from getting a tax benefit from donating self-created materials to an institution, so there is very little incentive for acts of generosity. So for living writers, the bidding wars will continue, and “for an author who fits our collecting scope very well, yes, we would be competitive,” she says. Few writers of note are leaving the fate of their life’s work up to chance, particularly as they have a chance to enjoy the proceeds.

A poet’s payday
University of Minnesota professor and poet Michael Dennis Browne didn’t rival Bly when he sold his archives to the U three years ago, for a reported $30,000. But he was gratified to place his papers.

“I had kids in college; I needed money. And I’m reaching the end of my teaching career. I’ve been here for 36 years, and I wanted the papers to have a home. And if you saw my garage or my study, you’d see I simply have too much stuff,” he said. Every few months a van pulls up at his home and hauls away a few boxes. The checks were a gratifying bonus as Browne faces retirement, but he takes satisfaction in something else, as well.

“I have spent some time with James Wright’s archives, and what a joy it was to open these tiny spiral notebooks that he bought at Gray’s Drug in Dinkytown,” he said. “There were drafts of his poems that I so fell in love with when I first read them in the 1960s, and I know what it means when you revere a writer to hold in your hands the actual source. I am amazed that I was able to teach in the same place where he taught — so unhappily — for a while, and to have my papers in the same vicinity of his, well. I don’t claim any virtue by association, but it feels right.”

Amy Goetzman writes about books, libraries and the literary scene for MinnPost. She can be reached at agoetzman [at] minnpost [dot] com.