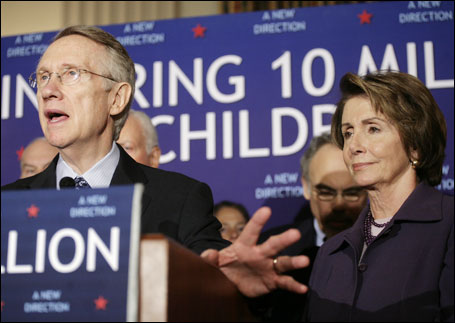 Yuri Gripas/Reuters
If Senate Majority Leader Harry Reid and House Speaker Nancy Pelosi want to improve Congress’ approval rating, they need to do more to challenge the Bush administration on Iraq, according to a fresh poll by Pew Research Center.

Congress’s approval rating is in the toilet. The national media have continually touted the fact — and it is a fact, according to repeated surveys.

But did you know “most Americans say that they are happy that the Democrats won control of Congress in last year’s elections” — 54 percent of them, in fact? That’s according to a Pew Research Center survey released late last week and reported by almost no one, save the Agence France-Presse news service.

Pew confirmed the news you may already know: as of this October, a dismal 31 percent of Americans approved of Congress, just one point more than like George Bush. The negative headlines for Dems have been deserved, since Americans, according to Pew, approved of Congress 41-to-36-percent in February and disapprove 31-54 now. For good measure, disapproval of Democratic congressional leaders has risen among Republicans, independents and Democrats.

However, the picture is not complete because the fundamental question really is: “Who do you want to run the government?” And here’s where the underreported news for Dems gets good.

According to Pew, happiness with 2006’s Democratic putsch is at an all-time 2007 high — only six points off the 60 percent happiness registered in the wake of last November’s takeover. But the real man-bites-dog is that unhappiness is at an all-time low. While 32 percent were bumming about the switch in March, the number slipped to 29 percent this month.

Bottom line from the public: the Democratic Congress isn’t wowing us, but please don’t bring back the Republicans.

On a host of issues, however badly the donkeys fare, the elephants get it worse. Compared to a year ago, the Dems have marginally expanded their edge as the party “concerned about people like me” (28-point difference last October, plus-29 this October), “can bring needed change” (20 to 22) and better manage government (10 to 12). The party’s advantage on ethics remains flat at plus-14.

The easiest way for Democrats to get overall approval into the plus column can be summed up in one word: Iraq. Forty-seven percent of Pew respondents think House Speaker Nancy Pelosi, Senate Majority Leader Harry Reid and company aren’t going far enough in challenging President Bush on Iraq; the number is higher among Democrats, at 65 percent.

Admittedly, Blue Dog Democrats and a veto-proof Republican minority hamper Pelosi and Reid in making real change; still, according to the poll, frustration has built throughout the year. The key swing voters are independents, and 48 percent of them think Democrats need to discover a spine. (Note: the poll has a margin of sampling error of between 3.5 and 4.5 percentage points; the higher figure is for partisan subgroups.) If anything, congressional Republicans have coalesced around the president in recent months, making it less likely they can win independents over.

Hollow support means the Democrats’ advantage can easily erode, when and if Republicans find a winning message or dovish candidates in swing districts. But the poll suggests the GOP’s current tactic — bottle up Congress and hang the hearty perennial “do-nothing Congress” on Dems — is of only limited utility. According to Pew, 26 percent of the public blames Democratic leaders alone for not getting enough done — but 30 percent finger the GOP minority. Thirty-four percent put a pox on both houses, but there are unlikely to be serious alternatives next November.

David Brauer writes about media, Minneapolis City Hall and Hennepin County politics. He can be reached at dbrauer [at] minnpost [dot] com.

Public disdain of Congress: less than meets the eye