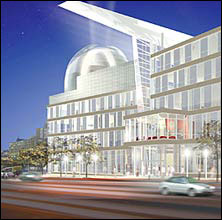 The vision for the Minnesota Planetarium and Space Discovery Center is as bright as ever.

But the down-to-earth reality is that the Planetarium’s backers are struggling to clear yet another hurdle in their rugged path to replacing the old planetarium, which closed in 2002.

For the vision piece, I asked Lawrence Rudnick, the distinguished University of Minnesota astronomy professor who has pushed for nearly a decade to create a first-class venue for Minnesotans to study and enjoy astronomy and space. If his enthusiasm could be harnessed, it alone might power virtual trips into space, launched from the computerized interactive Sky Theater that is planned for the Planetarium.

We will take people on journeys, to places where stars are born, stars are dying,” said Rudnick, who is a founding board member of the Minnesota Planetarium Society. “We could turn back to look at the Earth with all of the tools of our modern technology. . . . to help us see surface conditions — for example, to track El Nino currents as they move through the ocean, to look at rainfall patterns. The possibilities for what you can do in that theater are just endless.”

But a new roadblock came with the decision to merge the Minneapolis and Hennepin County library systems. The Planetarium was to be built on two floors topping the new central library in downtown Minneapolis. The city would have owned it under a deal the Legislature approved when it granted $22 million in bonding authority for the project three years ago.

Courting a new partner is daunting under any circumstances. In this case the challenge is complicated by the fact that the Planetarium will need some subsidy, as do most similar museums. A business plan completed this year by Lord Cultural Resources of Toronto predicts the revenues from admissions, memberships and other sources will fall nearly $1 million short of what the Planetarium will need to operate.

County officials haven’t been hostile to that prospect. The project just hasn’t been on their radar screens. (Would telescope views be a more apt metaphor in this case?) The Planetarium had been a top priority for the city; the county has a long line of other projects seeking support.

“The county has been tied up with many other issues before they get to us: the library merger, the ball park, bridges, and so on,” Parisi said. “So we are waiting our turn.”

County commissioners have been briefed on the project, but are not ready to decide the matter, said Amy Ryan, the Hennepin County Library Director.

Meanwhile, the Planetarium is in a near holding pattern for its drive to raise some $20 million from private sources.

It isn’t that Minnesota lacks interest in astronomy and space discovery. Thousands of school kids and teachers joined the lobbying campaign to convince state officials to grant the bonding authority.  The old planetarium drew 70,000 visitors a year, and the new facility would offer more and better experiences.

Indeed, corporate donors are enthusiastically supporting a travelling portable dome the Planetarium Society operates, enabling students to engage in virtual space experiences that are based on the state science standards, Parisi said.

Taking the dome’s success as a beacon, the planners are pushing ahead even while they worry.

“I will be nervous until the day we cut the ribbon,” Rudnick said. “But that’s just part of a big project like this. Anything ambitious and anything worth doing comes with risks.”