The elegant little video was intended to help tell the story of a mysterious blank spot in a masterpiece by the mathematical artist M.C. Escher.

Now, the video itself is a hit, winning a prestigious science award and drawing more than 800,000 viewers on YouTube.

And the two University of Minnesota mathematicians — who worked in their spare time to create the video, Moebius Transformations Revealed — are elated. But Douglas Arnold and Jonathan Rogness also are yearning to parlay their pop-culture success into serious appreciation for mathematics.

Last week, Arnold sat at the computer screen in his fourth floor Lind Hall office on the Minneapolis campus, watching the video’s tally of YouTube viewers pass 200,000 and continue climbing.

“I’ve been teaching mathematics since 1979, and I’ve reached a lot of students, but I’ve never reached 200,000 at one time,” said Arnold, who directs the university’s Institute for Mathematics and its Applications.

Even so, Arnold and Rogness were stunned.

“That is several orders of magnitude beyond the number of people I thought would watch it,” said Rogness, who is associate director of the university’s Center for Educational Programs.

The video already had earned official respect in top-level science circles. In September, it won an honorable mention in the National Science Foundation’s 2007 Science and Engineering Visualization Challenge, tying with a 15-member team from NASA which included video experts and a professional producer. (Click here [PDF] for the full story.) 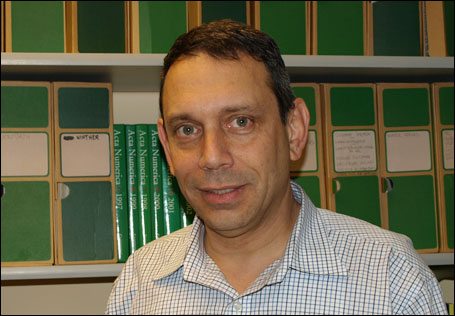 Photo by Sharon Schmickle
Douglas Arnold has been teaching students mathematics since 1979, but “I’ve never reached 200,000 at one time.”

Still, the YouTube success is especially sweet because pushing mathematics is a passion as well as a vocation for both men.

The center Arnold directs links mathematicians with experts from other disciplines to solve practical problems and probe topics in modern-day science. Its community outreach includes an annual public lecture series called Math Matters. And Arnold delights in drawing the crowds into mathematical topics — from math applications in magic tricks to computational tools for genome research.

Beyond teaching college-level math, Rogness spends a good share of his time working on programs to attract younger students to math studies. He promotes mathematics with the zeal of a politician on the stump.

“Not knowing math is almost a badge of honor in our society,” Rogness said. “Nobody says, ‘I can’t read.’ But a lot of people have no qualms about saying ‘I can’t do math.'”

Escher’s puzzling hole
The inspiration for the video began last January when Arnold got an email from a Canadian film maker, Jean Bergeron, who was directing a documentary about the puzzling hole in Escher’s lithograph “Print Gallery.”

The lithograph depicts a man standing in a gallery gazing at a picture of a strangely curving city that contains the gallery itself. At the center is a spot containing nothing but Escher’s signature. For years, mathematicians had debated the purpose and meaning of the blank spot. Some had concluded it never could be filled in any mathematically rigorous fashion.

“Escher could not have completed that portion of the picture without being inconsistent with the rules by which he was drawing the picture. That center of the whorl is — and must be — incomplete,” Douglas Hofstadter wrote in 1979 in the Pulitzer Prize winning book, “Goedel, Escher, Bach.”

But Hendrik Lenstra, a mathematician at the University of Leiden in the Netherlands, made a two-year project of solving the puzzle. Working with students, colleagues and artists, he came up with mathematical extensions for Escher’s technique and filled in the hole. The findings were reported in 2003 in Notices of the American Mathematical Society. 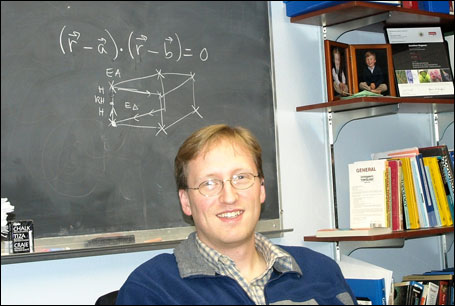 Bergeron, the Canadian filmmaker, was working on a documentary about Lenstra’s project when he called Arnold in Minneapolis. Years ago, Arnold had attracted attention for his visual animations of mathematical concepts. Bergeron wondered if he could do something fresh that would relate to elements in “Print Gallery.”

Arnold and Rogness set to work on a visualization of something mathematicians call Moebius Transformations, after the German mathematician and theoretical astronomer August Ferdinand Moebius.

Based on a function in geometry, the transformations are a standard feature in advanced math courses. But explaining them to non-mathematicians isn’t easy, in part because they involve complex or “imaginary” numbers which are not commonly used in every day calculations.

“It’s hard to say what they are good for on a practical level,” Rogness said. “That’s like asking what polynomials are good for.”

The transformations connect to relativity theory, he said, and they do play a role in practical applications such as brain mapping.

Escher’s “Print Gallery” isn’t a study in Mobius Transformations. Trained as an artist, Escher relied on intuition rather than formal education for the mathematical elements in his work.

‘The beauty of mathematics’
There are similarities to the transformations, though, represented in striking features of “Print Gallery.” While right angles remain true, straight lines of window frames, buildings and sidewalks give way to curves that spiral into a circular effect.

Those features help explain why Arnold and Rogness chose to visualize Mobius Transformations. Keep them in mind as you watch the video. (Watch a low-resolution version of the video here. Instructions for downloading the high resolution version are here.)

What tickles Rogness is that many YouTube viewers appear to enjoy the video without worrying about the math.

“Even if you don’t care what Moebius Transformations are and you don’t want to bother with the formula, you can appreciate their beauty,” he said. “Mathematicians always like to talk about the beauty of mathematics.”

Bergeron inserted a portion of the video into his film, “Achieving the Unachievable.” The bonus came when he also agreed to stage the U.S. premier of the film at the university campus in Minneapolis Nov. 1 as one of the Math Matters lectures.

Those who missed that presentation can take comfort from the fact that there is always another chance, another mind-bending lecture. The next Math Matters lecture, scheduled for Feb. 13, is titled Mathematical Modeling in Medicine, Sports, and the Environment. It features Prof. Alfio Quarteroni of Ecole Polytechnique Federale de Lausanne. His research team helped perfect the model for the yacht Alinghi, which has sailed to two America’s Cup victories for little landlocked Switzerland. (Lecture details are here.)