Sky watchers are in for a great treat this weekend because the annual Leonids meteor shower comes at a time when moonlight shouldn’t detract from its dazzle.

If the sky stays clear, Saturday will be the night to watch the cosmic fireworks, said Evan Skillman, astronomy professor at the University of Minnesota.

That’s when the Earth will move through a dust trail from the comet Tempel-Tuttle. To us on Earth, the dust particles will appear as falling stars or streaks of light across the sky.

The peak of the performance will be about 3 a.m., Skillman said, but there should be action to see between midnight and morning twilight.

“The best thing to do is lie down on your back and look all around the sky,” he said.

The comet’s meteor shower is named for the constellation Leo, the Lion, because from Earth it appears to emanate from a pattern of stars called “The Sickle” which outline Leo’s head and mane. Scientists call that apparent origin the radiant.

In fact, though, Tempel-Tuttle was orbiting the sun when it shed the debris stream that we see on Earth.

“It gets heated up by the sun, and little bits of dust get pushed off,” Skillman said. 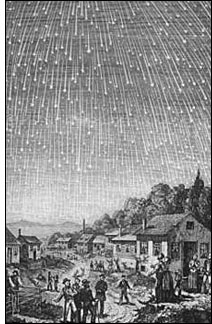 The most well-known depiction of the 1833 meteor storm was produced in 1889 for the Adventist book “Bible Readings for the Home Circle.” It is based on a first-person account of the storm by a minister, Joseph Harvey Waggoner.

The trail the Earth encounters on a given year might be decades old. The action this weekend will come from dust Tempel-Tuttle spewed in 1932, according to the National Aeronautics and Space Administration.

The lighting is caused when air molecules ram the particles. The debris collides with atoms of the atmosphere which then cool by glowing. Larger particles can leave a stream of smaller ones to form a fireball and blaze a glowing trail in the atmosphere.

Long ago, spectacular Leonid showers frightened people on Earth. Now, though, scientists are finding more precise ways to study and understand them. And astrobiologists are exploring theories that comets may have been a source of the organic chemicals that gave rise to life on Earth, according to NASA.

This year’s Leonids shower won’t be the most spectacular Earth has seen, not as stunning as those in 2001 and 2002, for example.

That’s not to say it won’t be a great show, Skillman said.

The bonus this year comes in its timing. The moon is due to disappear near midnight, about the time Leo begins to rise and set the stage for the show. What’s more, it falls on a weekend.

“You can stay up and watch it on a Saturday night and Sunday morning, and it won’t disrupt your work week,” Skillman said.