Jon Hassler, at work on his 15th novel, declines to let Parkinson’s-like illness redefine his life. 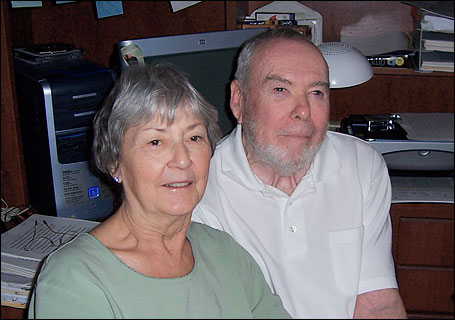 Photo by Dave Wood
Gretchen Kresl and Jon Hassler take a break from working on “Jay O’Malley.” One page takes the “better part of a day — if we’re lucky,” she says.

Doesn’t sound much like Jon Hassler, does it? His first novel, “Staggerford,” published 30 years ago, prompted its New York Times reviewer to call Hassler “a writer good enough to restore your faith in fiction.” Twenty books followed. Books like “A Green Journey,” into which Angela Lansbury made a movie faithful to the book. Or “The Love Hunter,” on which Robert Redford still holds the option. Or the wonderful “Simon’s Night,” which features an aging English teacher and his adventures at places like the Southdale Mall in Edina.

The draft of his new book, tentatively titled “Jay O’Malley,” reads the way it does because Hassler, 74, is a writer ravaged for 13 years by progressive supranuclear palsy, a Parkinson’s-like disease which has affected his vision, his speech and his mobility. At first, the disease was something of a minor irritant. For a time, Hassler counted how many times he fell down in a year then wrote a humorous essay about his mishaps. More recently, he has taken to a wheelchair and sometimes has difficulty getting a word out.

Painstaking process
Hassler and Gretchen Kresl, his wife of 17 years, sit in their study in South Minneapolis on a rainy fall day. They’re surrounded by first editions of his novels and their manuscripts, as well as play scripts performed each year at the Jon Hassler Theater in his boyhood home in Plainview, Minn. The computer screen is flashing, as Hassler eats his breakfast. The printer spits out a page of text, part of which opens this story: Fathe rogert groos, sosouruadminisitiatioor. …

Hassler explains that his disease makes him unable to control his hands, so, when he wants to type, his fingers hover over the keyboard and drop willy-nilly where they wish, sometimes in the right place, sometimes nowhere near. Nevertheless, he types a page of his story, prints it, then reads it haltingly to his wife (his voice, although at times barely audible, rings through with assurance). She then types it again and reads it back to him.

His voice wasn’t always halting. Years back Hassler was a star on the Minnesota reading circuit. He would typically read from his latest work, stumble across a phrase or a sentence he didn’t like, then look up at the audience and say, “I wonder why I wrote that line.”

Or he’d stop and tell a self-effacing story, as when he was asked to a celebration in Staples, Minn., where he had once taught high school. He rode in a convertible in the parade with romance novelist LaVyrle Spenser. “Afterwards, we went to the city park,” Hassler recalled to an audience years ago, “where they set up card tables so we both could sell our books. The lines for LaVyrle were very long. I had no line. After a time, LaVyrle excused herself to go to the Porta-potty. I thought, ‘Now I’ll sell some books.’ But no. LaVyrle went into the Porta-potty and her line followed her over there and waited for her to come out.”

Stories about the humble author are legion. One he tells on himself occurred when his first novel, “Staggerford,” was remaindered. “I was in a bookstore in Dinkytown,” he recalled, and they were selling my book in hardcover for $3, less than I could buy them from my publisher. So I brought 15 to the clerk to purchase against the day when they might become valuable.

“The clerk said, ‘You must be a Jon Hassler fan.’

“She looked at me and then at my picture on the dust jacket. ‘Well, I’ll be,’ she exclaimed.

“I wrote a check for the amount and she said, ‘Could I see some identification, please?’ “

‘Stickler for editing’
Despite his latest voice problems, the same spark in the Hassler self-editing scheme still remains. After Kresl reads the third version of the story to him, the REAL editing begins.

“Jon still finds all sorts of problems, once the story is read aloud,” she said. “He’s such a stickler for editing. But I guess the collaboration is not much more difficult than before his illness worsened. Back then, he’d rewrite a novel six times, to make it seamless, before a publisher saw it. Even now, after the editing, when we get it back into the computer, we rewrite it again.”

Not that Hassler didn’t make an occasional mistake before his illness. A big one was when he killed off Miles Pruitt, the very likeable hero of his first and best-selling novel, “Staggerford.” Fortunately, he didn’t kill off Pruitt’s landlady, the crotchety but loveable parochial schoolmarm, Agatha McGee, who has appeared as a principal in most of Hassler’s novels. She’s so important to Hassler and his oeuvre that for years he didn’t dare to watch Angela Lansbury portray her in the movie version of “A Green Journey,” which was titled, unfortunately, “The Love She Sought.” (He finally watched and was satisfied.)

So, how long does it take to create just one page these days?

What a collaboration. Will they go down in history with the other writing partners? Sam Clemens and Charles Dudley Warner, who did “The Gilded Age” together? Or Charles Nordhoff and James Norman Hall, who wrote “Mutiny on the Bounty?”

“No, no,” she replies. “Jon does ALL the creative stuff. I’m just the helper. I guess I should have been an English teacher, but I was afraid of the English chair at St. Ben’s (The College of St. Benedict), so I went into special education.”

A wan smile appears on Hassler’s stony face and he shakes his head.

Why doesn’t he just relax?
Hassler has already written 21 books, several of them to critical acclaim. But then came the ravaging disease, the faltering speech, the failing eyesight. And one must admit he’s not going to win any typing contests. So, why doesn’t he relax and give it up?

“I think that Jon wants to define his life by his work, not by his illness,” Kresl says. “That makes sense, doesn’t it?”

“It’s half autobiographical and half made up,” Hassler says. “The first part is about a man who goes back to his old school to teach.” (Hassler retired as a Regent’s professor at his alma mater, St. John’s University.)

And the other half?

When will the book be finished and who will publish it?

“By the beginning of December and by Viking — with luck,” Kresl says.

And with that luck, Hassler, whom critics have compared to disparate writers like John Cheever and Evelyn Waugh, will publish yet another book like “North of Hope,” about which Pulitzer Prize-winning novelist Richard Russo wrote, “(Hassler’s) brilliance has always been his ability to achieve the depth of real literature through such sure-handed, no-gimmicks honest language that the results appear effortless.”

So, what was Hassler writing in that excerpt beginning with fathe roget groos? Here’s what it looks like after the Hasslers got to work editing:

Father Robert Gross, our administrator, made short work of the funeral. He delivered the eulogy himself, which I thought very strange because he didn’t know Louis. He spoke of the abbot as a strong administrator, a sort of pre-Vatican II authoritarian figure. It was a kind of eulogy you would expect from Father Ruppert. I wanted to stand up and say, “Whoever you’re talking about, you’re not talking about Louis.”

Dave Wood is a former books editor for the Star Tribune and the author of several books.

Watch the video interview with author John Hassler above.

Word by word, typo by typo, page by page