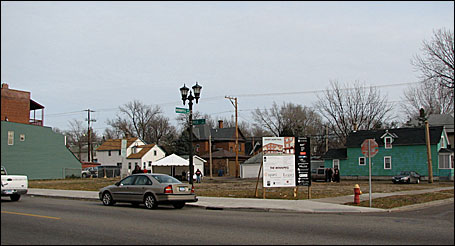 Photo by Joe Kimball
The northeast corner of Rice and Winnipeg streets in St. Paul will become home to part of a new multi-use development.

For years, folks on St. Paul’s Rice Street have wondered when it might be their turn for some city attention, and some city funding.

Always considered a rough-and-tumble working-class neighborhood — known more for boxers and bars than lattes and boutiques — Rice Street has waited for decades as the city hatched the successful rebirth of Grand Avenue and efforts to turn around Selby Avenue, along with redevelopment projects on the West Side, West End and East Side.

So there was much encouragement last week, when residents and dignitaries gathered on a chilly morning for the ceremonial groundbreaking of the Winnipeg, a new building project that will put 56 apartments above a first-floor commercial center. It will consist of two three-story brick buildings on either side of Winnipeg Street, on the east side of Rice, just a half mile north of the Capitol.

A long-needed turning point
“I think it’s a turning point for reinvestment in Rice Street,’ said Jonathan Sage-Martinson, executive director of Sparc, the area’s nonprofit development organization. “It builds on some things that came earlier, the new library in 2002 and some great community planning in 2004-2005.

“We’re seeing the results of that planning now, with features that the community wants.”

And those would include a historic, pedestrian-friendly Main Street; mixed use with stores and housing, reuse of existing buildings, along with “in-fill” to replace empty lots or dilapidated buildings.

“We need a new style of housing, modern apartments with interior parking, washers and dryers in the units, all the amenities that people are used to in new buildings,” he said.

Older buildings on the two lots have been demolished to make way for the project; still to be razed is the old Flower Hut site, still remembered as the site of a double homicide in 1992.

Rents in the apartments will be subsidized; some of them will be affordable for very-low-income people. Officials hope to attract folks who want to live in an urban setting close to the Capitol and downtown and longtime residents who want to stay in the area but don’t want to cut the grass or shovel snow.

Neighborhood reinvestment a key
“This area really needs great places to live, like this,” said Ramsey County Commissioner Janice Rettman. “We need residents who will put money back into the neighborhood by shopping here and using the services. But it’s just one piece of the puzzle. We need good-paying jobs and more businesses.”

Tony Mudzinski, whoses Mama’s Pizza will reopen soon just a few blocks north on Rice Street, said he’s anxious for new housing and new businesses to bring vitality to the neighborhood. “I can’t be the only one taking a chance,” he said. Mudzinski has been remodeling for months, after a water leak in an upstairs space inundated the landmark restaurant long run by his late mother, Peachie.

Getting the Winnipeg from concept to construction was a long, sometimes painful process, say those involved. The use of “green” construction — energy-savings features that cost more up front but are expected to pay for themselves over time — and concerns over polluted soil concerns and the need for affordable housing made for a financing fandango.

Fourteen groups pitched in, some with loans that must be repaid.

The city, county, state and feds were among those contributing, along with area banks and housing organizations.

“This has been a model of how to finance affordable housing,” said Howard Goldman of the U.S. Department of Housing and Urban Development. “These aren’t easy deals and they’re not for the faint-hearted.”

St. Paul Mayor Chris Coleman, just back from an official trip to Neuss, Germany, to visit a sister-city, said the Winnipeg project might have taken years to put together, but that’s nothing, compared with the Cologne Cathedral.

After long wait, Rice Street neighborhood gets a shot at redevelopment