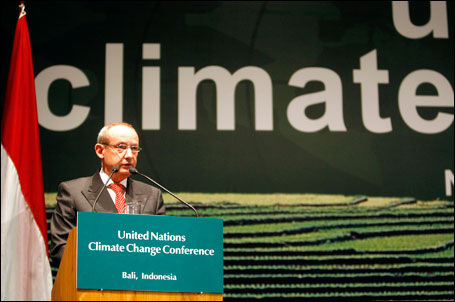 REUTERS/Supri Supri
The executive secretary of the United Nations Framework Convention on Climate Change, Yvo de Boer, delivers a speech during the opening session of a major U.N. conference in Bali on Monday.

First there were two, and now there is one — one outlier in the world’s effort to curb global climate change. It just happens to be the biggest emitter of greenhouse gases in the world, and it happens to be us — i.e. the U.S. Australia, the only other industrial naysayer of the Kyoto Protocol, left the United States isolated on Monday when its new prime minister, Kevin Rudd, signed papers ratifying the pact.

Rudd’s first official act elicited applause in Bali, where a major United Nations conference of nearly 190 nations began this week in an effort to negotiate a route to replacing the Kyoto agreement. The pact will expire in 2012, and delegates will try to have a framework for a broader effort in place by 2009. Momentum has seemed inevitable since the blockbuster United Nations’ Intergovernmental Panel on Climate Change (IPPC) report came out this fall to set the stage for the Bali conference (and win a Nobel Prize in the process). Yet even as the scientists’ blunt conclusions — that global warming not only exists but that human activity is very likely causing it — sank in, few seemed to think the United States will move beyond its support for voluntary, not mandatory, emission cuts. Nor do many think fast-developing nations like China will do much more than press for stiffer cuts for the most industrialized nations.

Still, it is human nature to hope for a more unified approach next time around. Malini Mehra, a BBC commentator from India, points out that we are imperiled “as a species, not as nationalities,” and calls for the articulation of “a new global ethics and a politics of the possible” to drive change. Opening words at the conference sounded similar themes, and some have predicted a somewhat more positive China, the world’s second-biggest carbon emitter, than has been seen in the past.

Geoffrey York, reporting for the Toronto Globe and Mail in Beijing, wrote that “China is much more keenly aware of how global warming is inflicting heavy damage on its own economy. Recent studies have warned, for example, that China’s rice harvest could plunge by 37 percent by the second half of this century if global warming continues. It would also face increasing droughts and water shortages if nothing is done.” He added: “China’s real interest in Bali, however, is to persuade Western countries to transfer their environmental technology to China as cheaply as possible. Beijing repeatedly makes the argument that the foreign technology would allow China to achieve its environmental goals much faster. To ensure a cheap price, the West should stop insisting on protecting the intellectual property rights of this technology, China says.”

Of course each nation will press its own perspective. For example, David Fogarty, writing for Reuters, observed that governments’ opening remarks “hinted at tough talks ahead. China insisted rich countries cut their greenhouse gas emissions by 25 to 40 percent by 2020, while Japan said China’s active participation in a new climate deal was ‘essential.’ ” Meanwhile, deforestation, technology transfers and the relative responsibilities of poorer developing nations will be major topics of discussion, predicts a Reuters backgrounder.

Perhaps the best hope for success lies in the combination of stark realities laid out in the IPCC report and the publicity generated both by the report and the Nobel Prize bestowed on its scientists and Al Gore. “The eyes of the world are upon you. There is a huge responsibility for Bali to deliver,” conference leader Yvo de Boer told delegates. “The world now expects a quantum leap forward.”

And then there was one: U.S. stands alone at U.N. conference on greenhouse gases