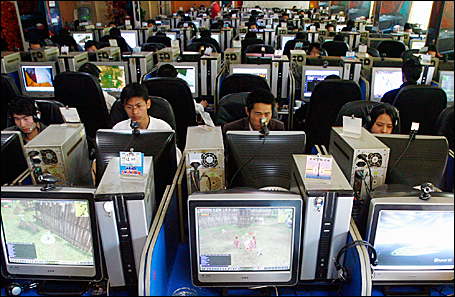 REUTERS/Stringer China
While many Americans are starting — and then abandoning — their blogs, China’s chief censor is trying to crack down on the rising number of political and cultural bloggers like these who frequent an Internet cafe in Kunming.

Many blogs are born in a fit of fervor, their authors vowing to update often, like a dieter pledging to exercise daily.

“I plan on visiting the blog frequently and even doing some live blogging,” Cate Edwards wrote in her first entry on a blog linked to the presidential website of her dad, former Democratic Sen. John Edwards.

Twenty-three months later, Cate has written 10 entries, seven of them in August. She hasn’t written since, inadvertently adhering to the blogger’s bell curve: a hiatus followed by a guilt-induced second wind followed by a hiatus.

Of course, cyberspace is stuffed with scattered shards of deserted websites bearing musty dates like March 2005. But abandoned blogs can leave a psychological residue. Riveting plotlines and compelling characters are frozen in cyberspace. Burgeoning careers, romances and pregnancies are arrested midpoint, confessions yet to be made, details undisclosed. Did she quit the job? Did she marry him? Did she have a boy or a girl?

It doesn’t take much inactivity before a blog’s traffic drops, said Cheryl Ricci, a public relations practitioner from West St. Paul who writes a personal blog. “If I don’t post in a few days, traffic plummets,” she said. There’s also an emotional cost: “I tend to feel a little guilty, like I’m letting down some of my readers. I also feel cut off from people, because if I’m not posting, I’m also not really checking in on the blogs I usually read.”

The stakes are higher for company-sponsored blogs. Launching blogs has become a popular business strategy, providing a hip and handy way to boost online traffic, broadcast a personality, and create a sense of that overused yet ever desirable buzzword “transparency.” For example, KARE 11 anchor Diana Pierce noted her anaerobic threshold (156 beats per minute) in a Nov. 20 post on her blog.

Pierce tries to update her blog regularly but needs the occasional reminder. “We’ll get e-mails every now and then that say, ‘Hey, it’s time to update your blog.'”

The problem is, no task is eliminated to create time for blogging. “It cuts into the time I would spend looking for stories and ideas, scanning the Internet or newspapers or magazines and [determining] how do I take a topic and relate it locally,” she said.

Blogging is an addition to an already stuffed plate, Pierce said. “We’ve got a lot of things to put on the Thanksgiving plate. We’ve got turkey, we’ve got stuffing, we’ve got cranberry — so do I take little portions of everything to make it fit or do I take large portions of my favorites? It’s like, ‘Aaah!’ Some days I go home and my eyes are crossing, because I’ll be looking at so much online and trying to ingest as much as I can.”

Fun fact
Merriam-Webster.com’s most searched term in 2004 was blog.

Blog Interrupted: Don’t hold your breath waiting for the next installment