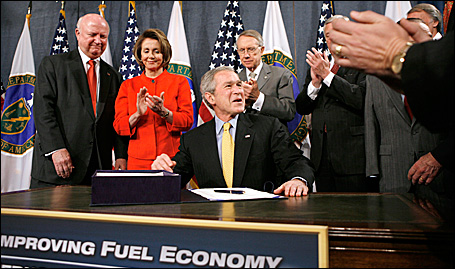 It was smiles all around Wednesday as Democratic leaders watched President Bush sign the Energy Independence and Security Act of 2007, thereby putting into motion the first mandated increase in U.S. fuel-economy standards in 32 years. The bipartisan bonhomie and congratulations were short-lived, however. Just hours later, the Environmental Protection Agency (EPA) denied California a waiver to put its more stringent vehicle-emissions curbs into place, thereby thwarting — as the Bush administration did at this month’s climate conference in Bali — any concrete targets for limiting U.S. greenhouse-gas emissions.

The compromise energy law requires automakers to reach a fleetwide average of 35 miles per gallon for U.S. cars and light trucks by 2020. It is widely seen as worth touting, despite compromises that dropped other standards as well as incentives for renewable technologies. By increasing vehicles’ fuel economy, it will have the effect of reducing greenhouse-gas emissions. It will also increase the efficiency of household appliances and mandate new labeling rules to help consumers compare products.

Follow-through is key to the law’s success, however, and some doubt the administration’s commitment to aggressively regulate. While applauding the new law, the Consumer Federation of America (PDF) voiced its concerns. Implementation of the fuel-economy standards and the improvements in appliances’ efficiency “will be overseen by the very federal agencies that have been dragging their feet for decades,” wrote Mark Cooper, the federation’s director of research. “Both the National Highway Safety Administration and the Department of Energy have lost lawsuits in the past few years that accused them of failing to do their job properly in evaluating the value of energy savings.” The federation, he wrote, stands ready to “trust and verify” that the agencies “will act in good faith to implement aggressively the spirit and intent of the legislation” — a hopeful, if not confident, stance.

Legal battle
Still, Wednesday’s signing would have been viewed with more pride had the EPA not, as the Washington Post reported, so soon thereafter overruled “the unanimous recommendation of the agency’s legal and technical staffs” in denying California’s proposed emissions regulations.

“The decision set in motion a legal battle that EPA’s lawyers expect to lose and demonstrated the Bush administration’s determination to oppose any mandatory measures specifically targeted at curbing global warming pollution,” the Post said. “A total of 18 states, representing 45 percent of the nation’s auto market, have either adopted or pledged to implement California’s proposed tailpipe emissions rules, which seek to cut vehicles’ greenhouse gas emissions by 30 percent between 2009 and 2016.”

That target “would have translated into roughly 43 miles per gallon for cars and some light trucks and about 27 miles per gallon for heavier trucks and sport utility vehicles,” said The New York Times, adding that if California and the other states had adopted the stringent standard, “it would have covered at least half of all vehicles sold in America.” Which is why the EPA’s action was so disappointing to anyone hoping for aggressive action to limit greenhouse-gas emissions.

Moreover, the EPA’s denial was a first. For 37 years it has been America’s leader in curbing air pollution; this is the first time it has been denied permission to adopt tougher rules than the federal government’s.

Top-down approach
Andrew C. Revkin noted in his Dot Earth blog at The New York Times that the Bush administration “touted its efforts to limit warming from greenhouse gases” at the recent Bali climate conference. And just a few years earlier, “the chief Bush administration negotiator, Harlan Watson, gave a speech holding out state actions as evidence of American initiative on climate. At those talks, in Milan in 2003, Mr. Watson listed a variety of initiatives begun by states and communities, which he said were like ‘laboratories where new and creative ideas and methods can be applied and shared with others and inform federal policy — a truly bottom-up approach to addressing global climate change.’

“Now the dynamic seems to have flipped, at least when it comes to limiting carbon dioxide from motor vehicles.” The government instead asserts a top-down approach: Its standard cannot be exceeded. That means, practically speaking, that it’s back to the courts — where the EPA’s own attorneys predicted the government would lose.

According to the Los Angeles Times, California will lose no time in pressing its case: ” ‘Gov. Schwarzenegger and I are preparing to sue at the earliest possible moment,’ California Atty. Gen. Jerry Brown said, asserting that the Bush administration had no legal justification to deny the state’s request.” Stay tuned.