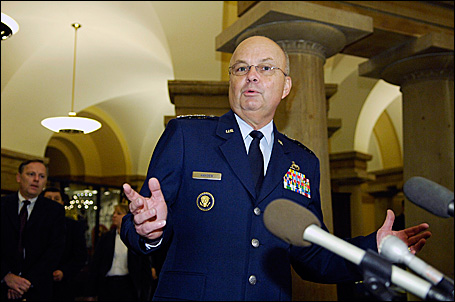 REUTERS/Jonathan Ernst
Gen. Michael Hayden, director of the CIA, talks to reporters as he arrives for a closed-door session on Capitol Hill Tuesday. Hayden distanced himself from the decision to destroy hours of video taken during interrogations of suspected terrorists.

It was a chilling scene: A former CIA agent described on ABC’s “Nightline” Monday night in vivid detail how he witnessed the 2002 “waterboarding” of a key Al Qaeda suspect, Abu Zubaydah. During the interview, “Nightline” ran video of a simulated waterboarding in which the subject’s face was covered, his head tilted back and water was poured on his mouth and face. The interrogation method makes the subject feel as though he is drowning. It is controversial and, critics contend, is torture and clearly illegal under international and U.S. law.

It is also at the heart of the most recent intelligence dustup that began when The New York Times revealed last week that the CIA in 2005 had destroyed hundreds of hours of video tapes of harsh interrogations of Zubaydah and another Al Qaeda operative. Now not only were the CIA’s methods under attack, but allegations of cover up came from many quarters. The Times also reported that agency lawyers gave written approval to destruction of the tapes.

“The concern should be less on what happened on the tape than on the effort to keep everything secret,” Barbara Frey, director of the Human Rights Program at the University of Minnesota and a long-time human rights lawyer, said in an interview with MinnPost. “I hope hearings (in Congress) will focus on lawyers and high level officials who are making decisions that go against our fundamental values as Americans.”

Frey, who is familiar with cases of torture around the world, acknowledged that “fear works and people do break (during interrogation). They’ll tell you anything they think you want to know, not necessarily the right stuff, but at what cost, the cost to our credibility internationally…No one trusts that we are standing up for principles we’re trying to enforce on them.”

But that didn’t wash with Tom Malinowski, of Human Rights Watch and a former staff member at the State Department and National Security Council in the Clinton administration. Speaking on “NewsHour” on PBS last week, he said: “It’s also just plain stupid. You know, in Washington, people seem to make this mistake again and again, forgetting that the destruction of evidence is often even more incriminating than the evidence itself. And I think that’s the problem that the administration is going to face now.”

Appearing on the same broadcast, Mark Lowenthal, former assistant director of central intelligence for analysis and production and a former staff member of the House Intelligence Committee, said the CIA’s explanation was difficult to accept “because you can always blot out names and do various things with the tapes. I think the concern — and I’m sort of reading backwards here — was that there would be inexorable pressure through some process, a judicial process, an investigation, to reveal the tapes and that, at that point, they would have considerable problems on their hands, not just about revealing identities, but about the graphics, how it looked.”

Doubts about torture
The story was carried around the world, including in the Telegraph in London, the People’s Daily online in China and Kommersant, Russia’s daily online, which concluded: “But even the highest-ranking officials in the White House may find it hard to avoid big troubles as the background of the upcoming presidential election and an invigorated power struggle in the United States as President Bush and Vice President Cheney remain the main targets of the Democrats.”

As for the ex-CIA agent on Nightline, identified as John Kiriakou, he said he believed the waterboarding of Zubaydah was justified under the circumstances at the time shortly after 911 and that it helped prevent future terrorist attacks. But he said he has serious doubts now about the use of torture.

“Like a lot of Americans, I’m involved in this internal, intellectual battle with myself weighing the idea that waterboarding may be torture versus the quality of information that we often get after using the waterboarding technique,” Kiriakou said. “And I struggle with it.”

The battle over waterboarding and those destroyed tapes that show what it looks like will continue for the foreseeable future in Congress and perhaps in the courts.