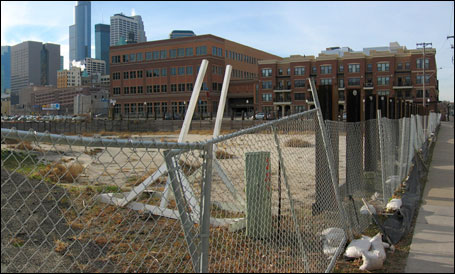 Photo by Daniel Corrigan
Brighton Development has pulled out of the Portland condo project proposed for this site between South Second Street and Washington Avenue.

A bike ride down Chicago Avenue in Minneapolis feels like a tour of an abandoned city. Foreclosures have decimated a 10-block area of homes, duplexes and condos. A few blocks away, giant “buy here!” banners wave in the wind and do dances of desperation on downtown condo facades.

Minneapolis condo owners, in particular, are getting pummeled as the subprime mortgage saga unfolds, prices continue to fall and the glut grows.

Average condo prices for the Twin Cities area fell more than 5 percent to $199,845 for the year ending in November, according to the Minneapolis Area Association of Realtors, while single-family home prices dropped 1.6 percent to $273,515.

But there’s an irony in the decline in condo prices and the rise in the number of units on the market: People who want to buy them are finding it increasingly difficult to get a loan.

The reason is that lenders are much warier of so-called mixed-use dwellings — buildings that house residential, retail and office units — and buildings that include both owner-occupied and rental units. Even strictly residential buildings with as little as 10 percent in rentals are considered risky to lenders.

All of this is hitting the downtown Minneapolis condo market especially hard because 10 of the 14 major residential developments with active, city-approved permits are mixed-use projects.

Minneapolis now has a four-year stock of condos, or almost five times the current inventory of new and existing single-family homes, according to a recent report by Metrostudy, a housing market-research firm. The 13-county Twin Cities area is suffering from serious condo overdose as well: There are 4,608 brand-new condos on the market and more than 3,000 previously owned units for sale, according to Metrostudy. That adds up to a 30.8-month supply of condos for the entire area.

The new loan gymnastics
Given the current slump, expensive condos will likely wind up empty for a while. Even if you could afford to snatch up one of the thousands of vacant spaces (just 49 of the 1,044 brand-new condos on the market in November were under $150,000), according to the Minneapolis Area Association of Realtors Housing Outlook report [PDF], the new requirements make it such that you’d have to perform various acrobatic acts just to get approved.

Take, for instance, my friend 31-year-old Sam Osterhout, who has a credit score of 780 (in a range of 330 to 830, that’s seriously excellent), a well-paying full-time gig, and was willing to put down around 37 percent of his condo’s value. He simply wanted to move into an uber-modern window-filled condo on Washington Avenue that smells like fresh paint and new shoes.

His loan process, which began in mid-August, became such a hassle that his first mortgage consultant quit, saying he couldn’t find a single lender in town who could guarantee a closing.

So why were banks turning away such a stellar candidate as Osterhout? Because Osterhout was buying into a downtown Minneapolis condo building that is zoned 60 percent commercial and 40 percent residential. Even Osterhout’s wad of cash and payment history couldn’t keep banks from running from him like emus under attack.

The pristine condos, reduced since they first went on the market by as much as $200,000, have been sitting vacant for more than a year. “We’re going to have to sell them at a loss; we do realize that,” says Stepnes, whose rehab work has appeared in magazines like Midwest Home. “What else can you do? They’re at a great price. It doesn’t make sense.”

As for Osterhout, he eventually snagged a loan through Wells Fargo in early October, but only after he delivered 10-grand in earnest money and endured three different closings that were all met with more questions and lender reluctance.

“Did Wells Fargo open last week?” Osterhout jokes. “If the mortgage companies continue with this caution, buyers like me will opt out of the market — I was two hours from doing so — and we’ll find ourselves with an insurmountable glut of empty properties and no one willing to finance them.” 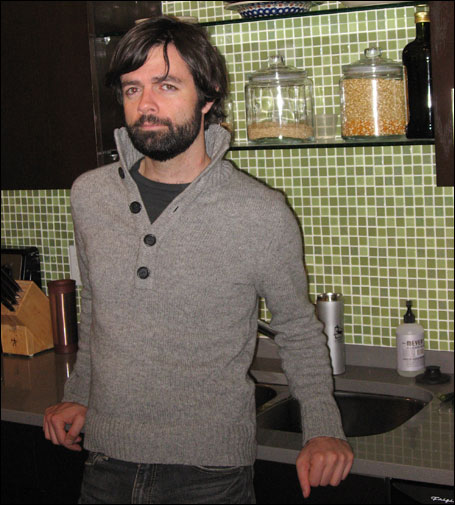 Photo by Molly Priesmeyer
Sam Osterhout endured three closings that were all met with more questions because he was buying a unit in a mixed-use development.

The ‘warrantability’ factor
The steep decline in the condo market has to do with a whole mess of factors including appraisal rules, condo saturation, developer saturation and something called “warrantability,” the criteria lenders use to determine a condo’s loan-risk factor.

According to Vince Hunt, a senior mortgage consultant at Lakeland Mortgage in St. Paul, it’s especially difficult to secure a condo loan in mixed-use developments.

For lenders, these condo buildings must pass “warrantability.” Ronny Loew, a mortgage banker and equity strategist at First Horizon Home Loans in Edina, says if a condo building is warrantable, it has passed certain thresholds that lower the loan risk, like having more owner-occupied units than renter-occupied.

Buildings with even as little as 10 percent in rentals are considered risky. Yet in an effort to not eat dirt, many developers are turning those could-be condos into rentals. The result? Further exacerbation of the condo glut.

It’s worse for condo owners trying to sell: “A building that has more than 15 to 20 percent commercial-use is also higher-risk because of the number of businesses that fail,” Loew says. Put another way, you’re considered more of a loan risk if you have what “could” amount to lousy neighbors.

Investors and other problem neighbors
Yet another neighbor issue is compounding the condo problem. Unlike with single-family homes, which have a wider reach when it comes to appraisals, condo owners are at the mercy of their next-door neighbors’ home value. If a neighbor is forced into foreclosure or has to sell quickly, it affects the price of every condo in the building. And foreclosures show no sign of abating any time soon. In the third quarter, there were 2,363 foreclosures in Hennepin and Ramsey counties, according to RealtyTrac. That’s a 102 percent increase from the same time last year.

Add investor concentration — where investors still own a large share of the units — to the volatile mix of cut-and-run neighbors, appraisal rules and increasing rentals, and the problem swells. “Investors still have control of so many buildings,” Hunt says. “That makes it much harder for owners to sell.”

So, how many condos “sold” in the Twin Cities currently are investor-owned? That’s the million-dollar question. “There’s no way we can know that,” says Ryan Jones, the Twin Cities director of Metrostudy. “That’s a national question. Everyone wants to know that.”

Developers pulling out
In 1998, the Minneapolis riverfront’s affinity for condos spilled into all downtown neighborhoods. It started with renovations in the Historic Milling District, led by the North Star Lofts on Portland Avenue and Second Street and expanding to the Stone Arch Lofts and Washburn Lofts, all projects from Brighton Development.

Fast-forward to nearly a decade later, and Brighton Development has pulled out of two major downtown condo projects: Washington Live-Work and the Portland. The condos at the highly touted mixed-use Two Twenty Two, which will house the downtown Minneapolis Whole Foods at the former Jaguar dealership on Washington, are all but dead.

The Bridges in St. Paul is still a dream on paper. Mozaic, the major Uptown mixed-use building with condos starting at $250,000, has yet to break ground in Minneapolis. And the Nicollet on the Mall, another mixed-use project, which was supposed to become the city’s largest residential trophy, is dying on the vine.

According to Matt Mullins at Maxfield Research, a Twin Cities real-estate research company, Mozaic has sold only 71 units, less than 50 percent of the proposed spaces. Unlike the condo heyday of two years ago, when developers were granted construction loans with only 35 percent of the units in purchase agreements, lenders today require as much as 65 percent pre-sold.

City sticking with mixed-use plans
So what will become of all these proposals and empty lots?

“The current situation just means that more projects will come through the [city approval] process again,” says Barbara Sporlein, director of planning for Minneapolis. “They may have multiple land-use applications, or a variance or two. They will have to then apply all over again if that’s the case.”

Even so, the current City Plans that guide urban development call for a number of mixed-use options. The yet-to-be-approved Uptown Plan, for example, has Mozaic at its center, a fancy and modern beacon of a bustling community of the future.

“We are already hearing that [C.A.G. Development, Mozaic developers] are probably coming back with revisions,” Sporlein says. “They have to come back if they have any changes in uses, size and site plans.”

One thing developers aren’t required to have approved is whether land use is for condos or rentals. “We do not regulate tenure,” Sporlein says. This isn’t exactly good news for current condo dwellers.

Still, despite the current four-year stock and a building history in the 1980s paved with developer bankruptcies and condo defaults, not everyone is convinced there is a looming crisis that needs to swiftly be averted.

“We’re concerned about it, too” Sporlein says. “Clearly. We keep an eye on stalled projects that still have room for approval. But these are cycles developers are used to.”

Sporlein says the Minneapolis planning commission has no intention of altering its plans for mixed-use developments throughout the city. “We don’t change plans every time there’s a swing in the market,” she says. “Our policies encouraging mixed-use development along transit corridors are still standing and still strong.”

Meanwhile, all around the Twin Cities, developers are holding empty plots of land where all that stands are signs promising an upscale, urban life with high-priced trimmings.

Experts predict the current glut will reel us into the 1980s condo crisis all over again, when the excess left behind a string of unsold condos and loan defaults that caused downtown home prices to sink deep into the Mississippi.

But so far there is one glaring difference between the two decades of condo-a-plenty: Few of the condo leftovers this time around could be refashioned as affordable rentals. According to the Realtors Association, nearly 70 percent of the newly built condos in Minneapolis are priced at $250,000 and above.

Molly Priesmeyer writes about real estate, veterans and arts for MinnPost. She can be reached at mpriesmeyer [at] minnpost [dot] com.

Want to know how many condos are on the market? How many are getting their asking price? Take a look at this Housing Outlook Report (PDF) from the Minneapolis Area Association of Realtors.

A condo calamity in the making?