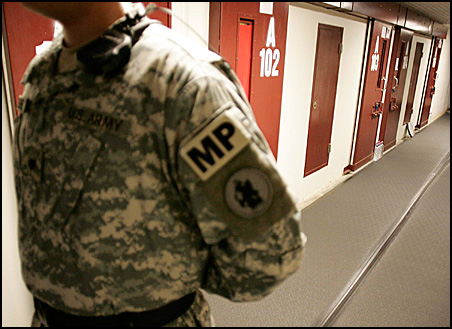 REUTERS/Joe Skipper
A U.S. Army guard stands in a corridor of cells in Camp Five, a detention facility at the Guantanamo Bay Naval Station in Guantanamo Bay, Cuba, earlier this year.

When people who’ve undergone harsh interrogation find their way to treatment in Minnesota, a common theme in their therapy is guilt over names they spilled after they cracked.

“One thing they find so shameful about themselves is that they broke and they gave away names,” said Douglas A. Johnson, executive director of the Center for Victims of Torture in Minneapolis.

The questions are central to heated debate in Washington where a bill before Congress would bar the Central Intelligence Agency from using waterboarding and other harsh interrogation tactics that many argue are torture.

Now the bill faces stiff opposition from Senate Republicans, with notable exceptions such as Sen. John McCain of Arizona, who was tortured as a prisoner of war in North Vietnam. On Friday, other Republicans used Senate procedural rules to block the bill, which President Bush has threatened to veto. 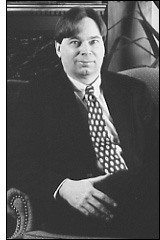 Douglas A. Johnson
Bill would ‘tie the hands’ of CIA

Bush administration officials insisted last week that the CIA’s interrogation methods have been “lawful,” and they have extracted valuable intelligence from senior al-Qaeda terrorists, the Associated Press reported.

Sen. Christopher Bond, R-Mo., ranked CIA interrogations as one of the nation’s best sources of intelligence in the war on terror.

“This bill would tie the hands of our terror fighters,” said a statement by Bond, vice chairman of the Intelligence Committee.

But Johnson insists those arguments don’t square with the evidence he sees in Minneapolis where his center treats torture survivors from around the world. In that role, Johnson has been called several times to testify on Capitol Hill. Even while many members of Congress dispute Johnson’s assertion that CIA tactics are torture, they have welcomed his expertise on interrogation.

But the information confessed is utterly unreliable, he said, and it can lead investigators in the wrong direction, endangering U.S. military forces and threatening national security.

In a panic to stop tough interrogation, many will spit out any name that comes to mind — innocent neighbors, cousins and friends — Johnson said.

“Our clients tell us to a person that they would have said anything the torturers wanted them to say,” Johnson said. “They tell us, ‘I named everyone I knew.'”

Johnson’s observations are in line with an in-depth report (PDF) on interrogation which was issued last December by a science board for the National Defense Intelligence College.

“Most professionals believe that pain, coercion, and threats are counterproductive to the elicitation of good information,” said a summary of the report, “Educing Information, Interrogation: Science and Art.”

“Although pain is commonly assumed to facilitate compliance, there is no available scientific or systematic research to suggest that coercion can, will or has provided accurate useful information from otherwise uncooperative sources,” wrote one of the study’s authors, Randy Borum, a University of South Florida professor who has served as a consultant to the Defense Department and U.S. intelligence agencies.

Moreover, Borum said, numerous studies have shown that pain and fear can mar not only the willingness to give accurate information but also the memory process that yields it up.

Experts’ views on Field Manual
The CIA had been operating under special permission the Bush administration granted in 2002 to use “enhanced” interrogation techniques. The CIA reportedly has not used waterboarding since 2003. The procedure involves strapping down a prisoner, covering his mouth and pouring water over his face to cause the sensation of drowning.

Following scandals over prisoner abuse in Iraq, Congress limited the U.S. military to interrogation techniques outlined in the Army Field Manual, while allowing the CIA to continue using secret alternatives.

In the Senate, Bond has argued that the Field Manual was intended as a training document for rookie soldiers, not for sophisticated CIA operations. The manual was first developed during World War II to equip young enlisted men with a “rudimentary set of skills and techniques,” according to the National Defense Intelligence College study. But its sections on interrogations have been revised over the years, most recently in 2006. The 2006 version prohibits waterboarding and a long list of other specific tactics.

Experts in Minnesota differ over the value of the Field Manual as a model for U.S. interrogation policy.

Dr. Stephen Miles said he shares Bond’s aversion to using the manual, but for different reasons. Miles is a University of Minnesota professor and author of the book “Oath Betrayed: Torture, Medical Complicity and the War on Terror.”

But David Weissbrodt, a University of Minnesota Law School professor who specializes in international human rights law, said the Army manual comes as close to the spirit of the Geneva Conventions as any alternative the nation would accept politically.

“It’s a lot easier to persuade people in the United States that the manual is what everyone should follow,” Weissbrodt said.