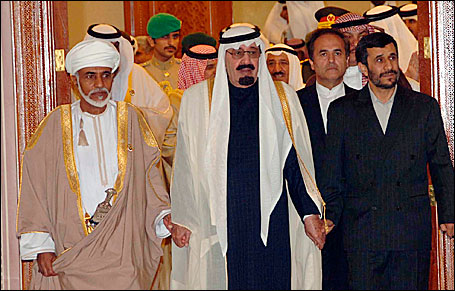 The falling dollar has stirred up fears of higher U.S. inflation and interest rates, but no riots yet. At least not in the United States. Last month in Dubai, an oil-producing Middle Eastern emirate, 4,000 migrant construction workers were arrested after protesting lost savings that had evaporated due to the dollar’s slide.

That’s because Dubai — like many Middle Eastern states — pegs its legal tender to the United States’ fading currency. But today or Tuesday, the six-nation Gulf Cooperation Council (GCC) could formally end its dollar peg, throwing crude oil on a building greenback fire.

GCC members — Saudi Arabia, Kuwait, the United Arab Emirates (UAE), Oman, Qatar and Bahrain — pump 16 million barrels of oil per day and hold 45 percent of the world’s proven reserves. Today marks the start of the GCC’s annual summit, where the UAE (which includes Dubai) is pressing members to revalue local currencies based on a “basket” of dollars, Euros and other world currencies such as the Japanese yen. According to Britain’s The Guardian, UAE Central Bank governor Sultan Nasser al-Sueidi has portrayed the action as a matter of national security, saying he is under “intense social and economic pressure to sever the peg to the tumbling dollar.”

The move — fiercely opposed by Saudi Arabia, the area’s dominant oil producer and a staunch U.S. ally — wouldn’t be as drastic as the long-feared repricing of oil, now also denominated in dollars. As the Bloomberg News service notes, “Abandoning the [oil] peg would risk driving crude prices higher for Americans, the biggest oil consumers” in a year where per-barrel prices have already risen 55 percent and the dollar has fallen 10 percent vs. the Euro.

1970s-era stagflation
Although the Saudis fought off a crude-dollar delinking two weeks ago, the GCC’s move could be seen as a half step toward those chains being broken. It would also be another signal that countries don’t need as many dollars — long the “reserve currency” in the world’s national treasuries. That slide is already happening — the International Monetary Fund says that between 2001 and June 2007, the dollar’s share of world reserves has fallen from 73 percent to about 65 percent. However, the greenback’s late-2007 freefall could accelerate a sell-off that would bring a generation-old shock to the United States.

That’s 1970s-era stagflation: a shrinking economy deepened by higher inflation and interest rates. The United States still runs a budget deficit, a trade deficit and a federal debt, and needs foreigners to, in effect, float us a loan. That means we need to attract their money, but if demand for dollars is falling, we’ll have to hike interest rates to lure customers with a bigger return. That’s not a big danger right now — in fact, the Fed seems to be leaning toward another interest rate cut Dec. 11 to fight off the U.S. credit crunch. However, the Fed’s action will only make problems like those in the UAE worse, and the rate-hiking tipping point will race rapidly forward. (Although the dollar’s decline boosts export-dependent U.S. jobs, stagflation’s domestic economic effects would overwhelm any employment gains.)

Meanwhile, inflation is exactly what Middle Eastern nations are experiencing. A lower dollar means their own currencies are worth less, boosting import costs — especially bad in desert nations that import nearly everything (sometimes even gasoline). According to Arab News, “Inflation is at a 10-year high in Saudi Arabia, a 16-year peak in Oman, a 19-year high in the UAE and near a record in Qatar.” In the UAE’s Dubai, that provoked relentlessly oppressed migrant workers to civil action.

Although GCC members aspire to a common economic zone and currency like the European Union, they retain national prerogatives for now. So even if the group decides not to step away from the dollar, individual members can relieve social pressure by doing so. That’s already happened in Kuwait, a GCC member which went to a currency basket in May (to few headlines and an unclear effect on the dollar). The Saudis could keep the appearance of a dollar peg while revaluing its currency. The Saudis have long traded their oil power for U.S. military muscle, but in a region where imports from Europe are more than three times that from the United States, domestic peace and regional tranquility may come first.