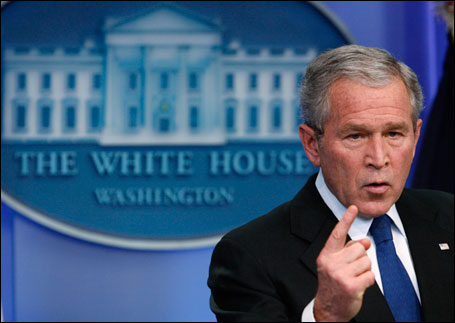 Not since the unraveling of the Bush administration’s rationale for war in Iraq have American citizens seen analyses that start like that of Steven Lee Myers this morning in the New York Times.

“Rarely, if ever,” he wrote from Washington about Monday’s release of a new National Intelligence Estimate on Iran, “has a single intelligence report so completely, so suddenly, and so surprisingly altered a foreign policy debate here.

“An administration that had cited Iran’s pursuit of nuclear weapons as the rationale for an aggressive foreign policy — as an attempt to head off World War III, as President Bush himself put it only weeks ago — now has in its hands a classified document that undercuts much of the foundation for that approach.” Myers noted one of the two central questions being discussed worldwide in light of the report: Why did the assessment change?

“It will raise questions, again, about the integrity of America’s beleaguered intelligence agencies, including whether what are now acknowledged to have been overstatements about Iran’s intentions in a 2005 assessment reflected poor tradecraft or political pressure,” he wrote.

The other main question is, of course: Why did the Bush administration — in particular, President Bush and Vice President Dick Cheney — continue to warn of development of a nuclear bomb by Iran right through this fall, when it knew in August, according to Bush, that intelligence assessments were being reanalyzed and potentially revised?

Bush still sounding alarm on Iran
Even as citizens, policy analysts and foreign governments ponder those questions, Bush continued his tone of alarm today in a press conference, saying he viewed the report as a “warning signal” because Iran could restart the program. “Iran was dangerous. Iran is dangerous. And Iran will be dangerous if they have the knowledge necessary to make a nuclear weapon,” he said. “I think it is very important for the international community to recognize the fact that if Iran were to develop the knowledge that they could transfer to a clandestine program, it would create a danger of the world. And so, I view this report as a warning signal that they had the program, they halted the program. The reason why it’s a warning signal is they could restart it.”

His logic found some resonance. Guardian Unlimited quoted a spokesman for British Prime Minister Gordon Brown as saying, “In overall terms, the government believes that the report confirms we were right to be worried about Iran seeking to develop nuclear weapons. It also shows that the sanctions programme and international pressure has had some effect. It also shows the intent is there and the risk of Iran acquiring a nuclear weapon remains a very serious issue.” France’s foreign ministry, too, put out the word that “We must keep up the pressure on Iran. …” And Israeli officials, even before Bush’s press conference, said they continued to think the NIE was wrong — that Iran still has a program to develop nuclear weapons.

Yet even before Bush’s press conference, other officials were sending different signals to the United States, and they went something like this: This new estimate, and the fact that your government had wind of its direction months ago, changes everything. The Times’ Elaine Sciolino quoted unnamed European diplomatic officials, for example, who said they were “struggling to understand why the United States chose to issue the report just two days after the six powers involved in negotiating with Iran — the United States, Russia, China, France, Britain and Germany — had decided to press ahead with a new Security Council resolution.”

“Officially,” one European official involved in the diplomacy told the Times, “we will study the document carefully; unofficially, our efforts to build up momentum for another resolution are gone.” And, Sciolino wrote, “Another senior European official called the conclusions of the assessment ‘unfathomable.’ “

Iran-watchers like Peter Baker and Robin Wright in the Washington Post described the NIE’s effects in stark terms. “The new intelligence report … not only undercut the administration’s alarming rhetoric over Iran’s nuclear ambitions,” they wrote, “but could also throttle Bush’s effort to ratchet up international sanctions and take off the table the possibility of preemptive military action before the end of his presidency.”

Many see new U.S. credibility problems
While in his press conference Bush rejected the notion that he’d been playing “the boy who cried wolf,” few seem to be persuaded that the new NIE presents no jarring problems for U.S. credibility. Perhaps that is because the president’s words — indeed the administration’s past and ongoing sales technique for seeking sanctions and hinting at more dire measures against Iran — are so clearly reminiscent of the administration’s rhetorical methods on Iraq as it built, and altered, its case for war. With Iraq, after talk of a mushroom cloud was shown to be vastly overblown, U.S. officials continued to talk broadly of weapons of mass destruction, by then limited to biological and chemical weapons and therefore a much lesser threat, as though they were as dangerous as the potential mushroom cloud. Now Bush talked this morning as though just gaining the knowledge of nuclear weapons was as dangerous as having them in development. It is natural to wonder: How many countries might have knowledge of how to make a nuclear weapon but haven’t done so and have no program to do so?

In continuing to attempt to isolate Iran by hyping a threat that the U.S. intelligence community does not believe exists, the Bush administration risks once again isolating itself, even from its allies, and losing international influence as it overreaches, continually relying on what has been its chief means of conducting foreign policy: military force.

But it’s still unclear how knowledge of this new report, combined with the president’s adherence to alarmist rhetoric, will shake out. Baker and Wright said some moderates are concerned that the report’s conclusions “will be overinterpreted in one direction,” noting that “Rep. Brad Sherman (D-Calif.), chairman of a nonproliferation subcommittee of the Foreign Affairs Committee, said Iran’s uranium enrichment remains worrisome and is not dependent on U.S. intelligence because Tehran has openly acknowledged it.”

They added, “The real lesson of the report, he said, is to recalibrate U.S. policy and try more diplomatic and economic levers. ‘It’s a validation of the middle road,’ he said, ‘between going to sleep … and the let’s-bomb-them-now approach.’ “

Europeans are skeptical about U.S. sanctions against Iran.

France and Britain urge pressure on Iran despite the U.S. intelligence report.

Jerusalem Post coverage of U.S. intelligence report with comments from its readers.

The Guardian special report on Iran.