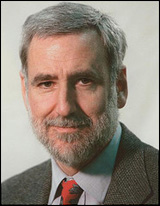 Eric Black, a long-time Twin Cities newspaper reporter and more recently blogger, will join MinnPost on Jan. 2. Black, formerly of the Star Tribune, the Big Question blog, and the Minnesota Monitor, will write for MinnPost about the same topics he has covered for years. These include the politics and government of Minnesota and the United States, the historical background of topics in the news, international issues of war, peace and some of the various states of in-between.

Ericblackink.com, where Black’s work has appeared since he left the Strib in June, will become a page within MinnPost.com. We MinnPosters look forward to an association that we believe will benefit MinnPost readers.

Asked to comment, Black replied: “What are you talking about? I don’t give quotes. I get quotes. But I am excited to become part of MinnPost’s thoughtful approach to news. Happy New Year everyone. See you in 2008.”