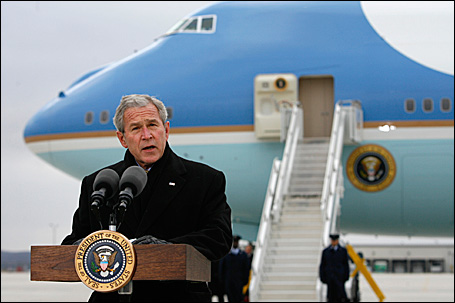 REUTERS/Kevin Lamarque
President Bush stands in front of Air Force One in Omaha, Neb., Wednesday as he makes remarks about Iran.

Three days after the revised National Intelligence Estimate on Iran sent heads spinning, the media have sprouted a cornucopia of insights, dissections, guesses and assessments. They’re fascinating — and frequently divergent.

A TIME.com intelligence columnist asserted, for example, that “the Bush White House was behind this NIE.” Robert Baer, a former CIA field officer in the Mideast, wrote that while 16 agencies contributed to the report, “you can bet that an explosive, 180-degree turn on Iran like this one was greenlighted by the president.” Why?

“The real story behind this NIE,” he wrote, “is that the Bush administration has finally concluded Iran is a bridge too far. With Iranian-backed Shi’a groups behaving themselves, things are looking up in Iraq. In Lebanon, the anti-Syrian coalition and pro-Syrian coalition, which includes Iran’s surrogate Hizballah, reportedly have settled on a compromise candidate …. Bombing Iran now would upset the fragile balance in these two countries. Not to mention that Hizballah has threatened to shell Israel if we as much as touch a hair on Iran’s head.”

Baer added that “in private, the Gulf Arabs have been reminding Washington that Iran is a rabid dog: Don’t even think about kicking it, the Arabs tell us. If you have to do something, shoot it dead. Which is something the United States can’t do.”

‘Media disaster’
At Haaretz.com, however, Shmuel Rosner and Aluf Benn see President Bush not as a green-lighter, but rather as a leader put in restraints by others: “The intelligence community responsible for the report … joined hands with the strained and reluctant military apparatus in its attempt to put the president’s hands into anti-confrontation handcuffs.” They see Bush as someone “commanding an engine chugging forward while the ties between the cars lumbering behind him are coming loose.”

Facing “the media disaster prompted by the report,” they noted, “the White House played practically the same card as did Israel: its proof Iran is dangerous, so it’s important to keep up the pressure. It was agreed upon, in internal discussion, to wait for the first wave to pass in a few days to assess the damage wrought by the report on American and international awareness. One official quite bothered by it all commented, ‘So far, it doesn’t look good.’ “

One certain reason for his interim assessment: the constant written reminders, replayed video footage and highlighted quotes of Bush and Vice President Dick Cheney talking about the Iran threat — some quite recent. Ray Takeyh, an expert on Iran at the Council on Foreign Relations, summed it up in a Q & A on the council’s website. In answering a question about whether Iran’s neighbors might now relax, he said: “I think it relaxes everybody, but part of this has to do with the Bush administration’s representation of the Iran threat. The administration had suggested there was an immediate, imminent threat, which was frankly always contradicted by a body of evidence that was available even before the release of this NIE. Nobody thought Iran was on the threshold of developing a nuclear weapon anytime soon, so this was a particularly important contradiction in the way the administration had chosen to present this Iran case.”

This week, of course, the administration has had to revise its presentation, while trying not to appear to be revising its view of Iran’s potential danger. But it may need to wait more than a few days to “assess the damage.” An astute “guide to the players and their likely plays” at TIME.com opens with writer Tony Karon’s observation that attempts to win the NIE interpretation battle will likely last a long time:

“The Rashomon-like battle to interpret the new National Intelligence Estimate (NIE) on Iran is well under way. All sides of the Iran nuclear dispute are working hard to make their own reading of the report the accepted one, and to emphasize the findings that best suit their agendas. Those agendas will remain unchanged by the NIE: Israel and Washington hawks want military action against a grave and gathering threat; the Bush Administration is pursuing coercive diplomacy; the Europeans want to avoid war. And it is those agendas that will shape each player’s response to the NIE in what promises to be a furious battle over Iran policy in the months to come.”