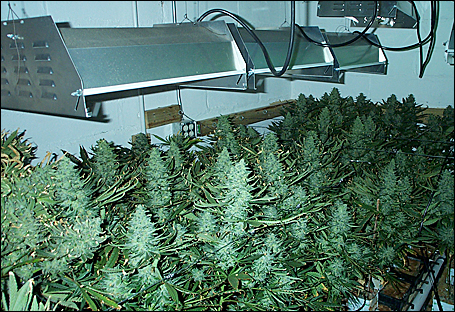 Courtesy of the Hennepin County Sheriff’s Office
A few of the about 1,100 marijuana plants seized by agents in raids on “high-grade marijuana” operations flourishing in Twin Cities-area suburbs.

A news release from the Hennepin County Sheriff’s Office last week had some rather staggering figures in regard to a series of recent pot busts. The numbers come from the sheriff’s office, the Southwest Hennepin Drug Task Force and the West Metro Drug Task Force. “The numbers from January 2006 to the present regarding grow operations,” the missive reads, “illustrate the value of the marijuana seized and guns seized in these investigations.” To wit:

What the figures don’t tell you is this: Most of these “high-grade marijuana” operations are flourishing where you may not expect them. That is, not in bad pockets of south Minneapolis or on the violence-riddled North Side, but in the well-to-do west metro suburbs.

In fact, the press release trumpets one major bust from this fall as “the single largest indoor grow that the Sheriff’s Office has seen to date.” Some 1,100 marijuana plants valued at $4.476 million were seized at a house by agents who were working with the Orono, Mound and Medina police departments. Read: Lake Minnetonka territory.

“This large, high-end house was in an upscale neighborhood in the suburbs and is currently under investigation,” the press release reads. “What made this grow so sophisticated and therefore more dangerous, is that the suspects tapped into the main utility power line by drilling through the basement wall and digging underground to circumvent the house meter. The home was used for the sole purpose of manufacturing marijuana and was ruined with mold and holes drilled in the floors for venting.”

“The exterior of these homes are kept up and manicured,” says Kathryn Janicek, spokeswoman for the sheriff’s department, pointing to another bust that led officers to the Bloomington, Blaine and Barnum houses of one family. “You wouldn’t even know if your neighbor was growing high-grade pot, and they even pay somebody to tend to the crops.”

Beware the doobie nanny! In a sense, these supersize operations might mimic the kind of big-box retail outlets that dominate sprawling suburban landscapes.

Greed and crimes of violence
A more dubious claim from the sheriff’s office links marijuana to violence, which is surely counterintuitive to anyone who’s seen “The Big Lebowski,” or maybe even managed to inhale once or twice.

“There is a misconception that marijuana is not linked to violence,” asserts the memo.”Through our investigations, we have learned that marijuana organizations are just as dangerous as other drugs. There are huge profits to be made, resulting in greed and crimes of violence.”

Really? The press release goes on to cite no such evidence.

“I know, people say ‘It’s just pot, what’s the big deal?'” said Janicek, adding that the weed seized has such high levels of THC that “it’s sending people to Hazelden.” (The release from the sheriff’s office cites a “Hazelton Treatment Center Research Report.”) “But they protect these operations with guns.”

This sort of propaganda seems like so much reefer madness, but Janicek insists that officers have found links to the high-end growers and gun violence around the metro.

“I wish I could tell you more about the violence,” she said, citing incidents that are under investigation. “Their investigations have found dangerous weapons and dangerous guns linked to assault and homicide.”

In short, to hear Janicek tell it, this is not your father’s pot dealer, and, like any entrepreneurial endeavor, things have become far more sophisticated, raising the stakes, uh, higher. “This is not,” Janicek concludes, “just some Joe Schmoe who tokes a joint and watches a movie on Friday night.”

A healthy skeptic of the Just Say No era, however, might wonder if this is where the War on Drugs has led us.

Hennepin County sheriff takes war on drugs to the burbs