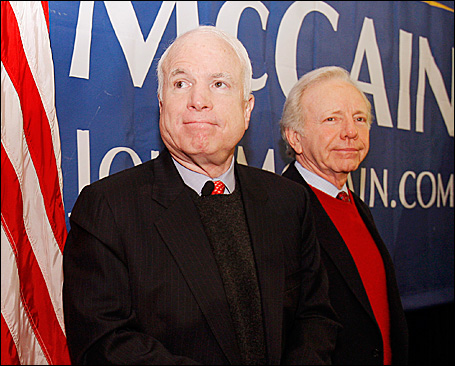 While it isn’t as Odd Couple-ish as Eugene McCarthy’s endorsement of Ronald Reagan in 1980, “Independent Democrat” Joe Lieberman’s cross-party nod today to Republican John McCain is interesting enough to earn the beleaguered presidential candidate a day of headlines.

Lieberman and McCain are bound by their fervent support for the Iraq War; the announcement is timed for New Hampshire, where independents can vote in either party’s Jan. 8 primary. However, any political gain will probably be on the margins: in the 2004 Democratic primary, “Joementum” crashed and burned in the Granite State, as voters placed the senator from nearby Connecticut fifth with a mere 9 percent of the vote. Currently, McCain trails Mitt Romney by 16 points in New Hampshire, according to a compendium of polls charted by Pollster.com.

However, the hidden game plan could be to push McCain ahead of Rudy Giuliani as the “less-religious” alternative to Mitt Romney and Mike Huckabee heading into February’s big-state primaries. According to Pollster.com, McCain recently passed Giuliani in New Hampshire for the first time since last spring.

Although Giuliani remains the national front-runner, his poll numbers have plunged following national headlines about taxpayer expenses related to the then-mayor’s affair with his current wife, Judith Nathan. (Lefty blogs have labeled the saga “Sex on the City.”) A head-to-head comparison between Giuliani and McCain is uniquely unflattering to the former New York mayor. McCain is the Republican who best neutralizes Giuliani’s 9/11 calling card, since the Arizona senator has hung his political hat on the Bush troop surge. Also, there’s no comparing the foreign policy experience, especially as Giuliani ran away from the Iraq Study Group.

Power over ideology
To be sure, McCain’s issue baggage is bigger among Republican primary voters, though upon examination, there’s little real difference. (For example, both are immigration softies, it’s just that McCain hasn’t run away from his record as Giuliani has.) Giuliani also retains sacks full of money, compared to McCain’s jars of coins. And independent voters cease to be a factor after the campaign buses leave New England.

The national impact: control of the U.S. Senate. Lieberman holds the balance of power between the current Democratic majority and a 50-50 tie that would throw the body to Republicans via Vice President Dick Cheney’s deciding vote. After Lieberman’s 2006 Senate reelection over Democratic endorsee Ned Lamont, he pledged to caucus with the Democrats. So far, Lieberman has kept that promise — but is the McCain endorsement the sort of provocation that could force Dems to kick him out?

Unlikely; power has a way of trumping ideology. When the endorsement news broke yesterday, Republican-allied FOXNews reported that “a senior Lieberman aide” took great pains to say “this is in no way an endorsement of the [Republican] Party, just the man.” Lieberman has eschewed running as McCain’s vice president, and the aide noted that McCain was the only presidential candidate who had asked for Lieberman’s nod.

That’s not surprising, given the anti-war passion of the Democratic base and Lieberman’s full-throated support of Bush. The national speculation today is if the McCain-Lieberman duet makes New Hampshire’s Republican race closer, some independents would be pulled away from voting Democratic, where they are seen as drifting toward the siren song of change that is Barack Obama’s effort.

Obama and Lieberman
But even among die-hard Democrats, Lieberman could cost the steadily rising Obama votes. New reminders of the Connecticut senator’s apostasy have re-ignited chatter that Obama endorsed the pro-war Lieberman over anti-war insurgent Lamont in last year’s Democratic primary. Hillary Clinton did, too, but since Obama’s antiwar consistency is key to his campaign, the danger is higher for him — a fact that John Edwards might want to highlight. Among the Democratic big three, Edwards was the only one to endorse Lamont in the primary.

Two weeks after Lamont announced his U.S. Senate bid in March 2006, Obama flew to Connecticut to loudly endorse Lieberman. As the keynote speaker at the Connecticut Democratic Party’s $175-per-head Jefferson Jackson Bailey Dinner, Obama proclaimed: “I know some in the party have differences with Joe. I’m going to go ahead and say it. I am absolutely certain Connecticut is going to have the good sense to send Joe Lieberman back to the U.S. Senate so he can continue to serve on our behalf.”

According to Associated Press writer Stephanie Reitz, Obama and Lieberman entered the room together and “worked the crowd in tandem,” despite the considerable contingent of Lamont supporters who often booed Lieberman. Interestingly, the AP and Hartford Courant have reported that Lieberman was Obama’s mentor when the latter joined the Senate in 2005. The New York Times said it was part of a program to pair veteran senators with freshman; according to the Hartford Courant, Lieberman claimed Obama had picked him.

In any event, Obama, like Clinton, abandoned Lieberman in the general election after Lamont won the Democratic primary. According to the Associated Press, Obama backed Lamont with $5,000 from his political action committee, and also issued a pro-Lamont email to 5,000 Connecticut residents. Although he’s not among the Democratic leaders, presidential candidate Chris Dodd — Connecticut’s other senator — may want to remind party voters that he, like Edwards, endorsed Lamont before the primary.

The hidden politics behind Lieberman’s endorsement of Republican McCain